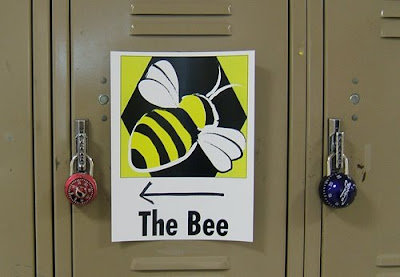 As some of you may remember from this post, I've been working on a picture book about a bird named Abigail who enters a spelling bee. For the sake of research, this weekend I attended my first ever spelling bee and I must say, it was totally riveting. The bee began with a stage full of expectant spellers. 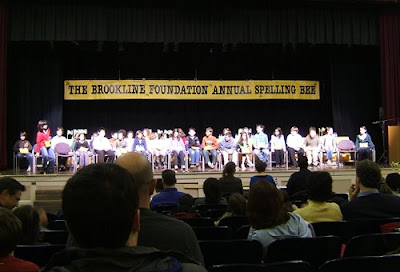 One by one they each stood up and took a turn. Some were so excited they couldn't sit still in their seats. Others held their shoulders up by their ears with nerves. All of them took the rules of the bee very seriously, repeating their assigned word before and after they spelled it, and waiting on the edge of their seats to hear if one of the judges would proclaim it correct. I too was on the edge of my seat, I wanted them all to win! 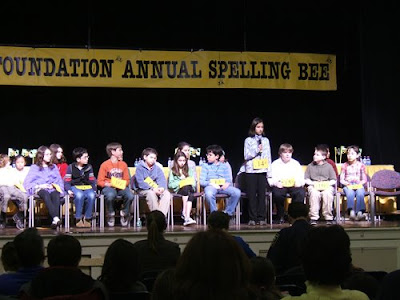 Finally a small group of kids was left on stage. The words got harder and harder. I was really amazed at the difficulty of the words- some I couldn't spell myself! 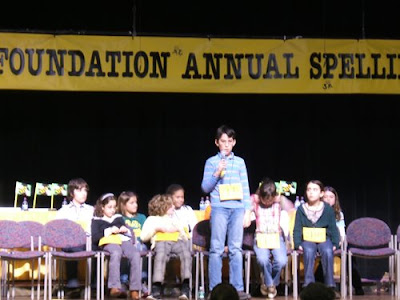 At last it came down to these two contestants. The one standing up was very serious and commanding as she spelled each word. The one on the right was giddy, when a word was announced that she knew a smile burst onto her face and she bounced a little. The last word was hers, 'conqueror'. The word was apropos because she took first place. 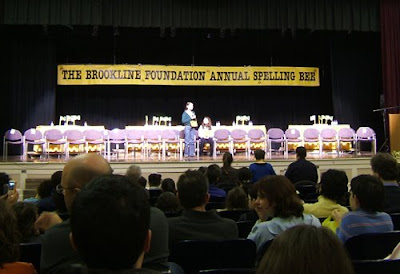 I thoroughly enjoyed myself and it really seemed like the kids did too. It was refreshing to see what good sports they were- cheering each other on and having fun up there. It wasn't the kind of cut-throat competition I had worried it might be, and there were no soccer moms brawling in the isles. The whole experience made me all the more excited to start the paintings for my new book. Its nice to be inspired by reality.
Posted by Anna Alter at 9:30 AM

How fun! I haven't been to a real school spelling be since . . . well, since I was in elementary school. Thanks for sharing the pictures--can't wait to see Abigail!

My name is Abigail, and one year I was the champion speller in my school, so you KNOW I'll be buying this book!

I look forward to seeing it -- when is it scheduled to come out?

My last spelling bee - 2 many years ago to tell - we were divided into teams - I had to go on the boys side because they were short one person. We ended up winning when I spelled parochial - the boys claimed the victory, and couldn't resist calling the girls "stupider". I was labeled a traitor to the girls. Maybe I should have thrown it ;-)

Abigail- That is too funny! The book will be out next summer, just working on the illustrations now.

Kim- Your teachers should have known better than to divide things up that way, sheesh! If it makes you feel any better, most of the finalists at this bee were girls.

I'm sure someone has recommended the truly excellent documentary Spellbound to you by now? It's a classic and a favorite!!! Not least because so many of us experienced spelling bees in some form or another as kids...

It won't help you find words for young spellers, but it's great fun, while you're on the theme! :)