So, I was tagged by Ann Downer to participate in this blog tour. It's chain-letter tour of sorts where I answer questions about my books and then pass it off to other author/illustrator friends. I actually don't usually participate in these types of things (I always feel like I don't have anyone else to tag) but I am trying to get my baby-filled world a little more balanced with work and I thought this might help get me back into the right (write?) mindset: 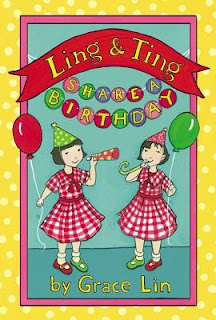 1. What is the working title of your next book(s)?
My most recent book is Starry River of the Sky (companion book to Where the Mountain Meets the Moon), which came out last fall. My next book is  Ling and Ting: Share a Birthday, a sequel to my first early reader  Ling and Ting: Not Exactly the Same. It comes out in the fall.

2. Where did the book idea come from for the book?
I guess I will talk about the book that is upcoming, Ling and Ting Share a Birthday.

In general, I want the Ling and Ting books to address the unique experience it must be to be a twin. I, myself, am not a twin (I did long to be one when I was younger) so I interviewed a half dozen set of Chinese-American twins when I was writing the first book. During one interview, one of the mothers mentioned something about making two cakes for one birthday and even though I didn't know how I was going to use it at the time, I knew it was something to remember. Slowly, I realized that sharing a birthday is an experience pretty unique to twins and decided to make the next Ling and Ting book about that.


3. What genre does your book fall into?
early reader

4. What actors would you choose to play the part of your characters in a movie rendition?
I'd definitely want it animated with an unknown voice actor.

5. What is the one sentence synopsis of your book?
Ling and Ting share a twin-tastic birthday!

6. Who is publishing your book?
Little, Brown & Company

7. How long did it take you to write the first draft?
3-6 months. But early readers are HARD to write. They are faster for me to write than novels (which take me 2-3 years), but they are brain- squeezing-like-the-last-bit-of-toothpaste hours. Novels are like marathons, picture books are like sprints and early readers are like running hurdles.

8. What other books would you compare this story to within your genre?
I'd be honored if people compared my book to Frog and Toad or George and Martha.

9. Who or what inspired you to write this book?
Well, I've written about the inspiration of Ling and Ting before, but I will repeat it.
Just like how Year of the Dog was an homage to the Betsy books, this early reader began as an homage to the Flicka, Dicka and Ricka books I used to read. (I had to paint Ling and Ting in the same dotted dresses!)

But even though my vision was for identical girls, I felt a tad uncomfortable-- would I be encouraging that whole "All Asians look alike" stereotype? So I put the story away and let the idea sit and sit. For years.

And then in 2005, a group in Portland, ME put on a play of the Ugly Vegetables. There, I met the cutest Asian twin girls I've ever seen. As I watched them share cookies but eat them in completely different ways, a light went off in my head. Suddenly, I knew how the book should be written and that I needed to give the early reader another shot.

So I went home and scratched and rewrote and resketched, with a different outlook. The shift was subtle, but important--as it finally justified (to me) why the characters had to be identical.


10. What else about the book might pique the reader's interest?
I'm working on a third Ling and Ting book! Right now it's called "Ling and Ting:Twice as Silly!" It is a little less about Ling and Ting being twins and more about them just having fun as twins (though I resisted the typical "switching places" story line). I'm hoping this can be a series! 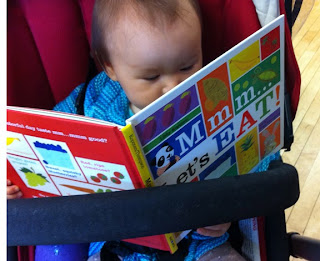