Books that hold up and books that don't

Some friends and I were talking about re-reading books we had loved as children, and how some hold up and some don't. For me, LITTLE WOMEN really held up -- but someone else found all the mother's lectures and Louisa May Alcott's own preachiness really annoying. I did, too, but I still love the book anyhow and suspect that as a child, I ignored those parts the way I ignored much of what the adults in my life said.

Some books that did hold up for me:
The Secret Garden -- I may even love this MORE now, even though I never could get as interested in Colin as I was in Mary, AND liked her better before she became nice
The Hobbit -- especially the scene with the trolls,and when they are first riding into Rivendell
very old MADs, from the late 1950s and early 1960s--they still make me laugh out loud
fairy tales
nursery rhymes
the d'Aulaires Abraham Lincoln
--to name a random few. I could go on and on, but what's going to be most interesting about this post is what other people think.

I also reread a Giant Golden book called ASTRONOMY and could see why I liked it so much, but as an adult, I didn't read every word. Maybe as a kid I didn't either! I was sad, though, to see something I don't know if I noticed as a child: that the scientists and astronauts were always men of European ancestry -- and that even the children doing simple experiments were white boys. People -- men and women -- with dark skins appeared in skin-tight outfits stretching their arms to the moon. Once a woman in a neat suit, hat, and gloves looked at a meteorite with her children. The text talked about MEN going into space someday.

If I get impatient with PC things, I will remember this book and its not-so-subtle message. I hope I ignored it the way I ignored the preachiness in LITTLE WOMEN but I wonder....

What didn't hold up:

Alice in Wonderland -- this wasn't one of my FAVORITE books as a kid, but I did like it a lot. I thought Alice was really smart and both loved and admired the way she always tried to figure everything out. When I reread it as an adult, I realized with dismay that that was supposed to be funny! I also found the book too boring to finish.

Then there were some classics that I could never get into as a child and can't now--like Carl Sandburg's short stories for kids. One was in a beloved, literally loved-to-pieces anthology illustrated by Garth Williams called THE TALL BOOK OF MAKE BELIEVE (this story was NOT by Carl Sandburg -- it's "The Very Mischief"): 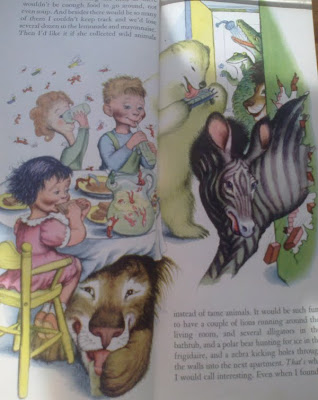 Although I read everything else in that book over and over and over, I could never finish the Carl Sandburg story. It just seemed pointless and kind of stupid -- the kind of silliness some adults think children like. I also hated (and still hate) Aesop's Fables.

What about you? What has held up? What hasn't?

I'm especially curious about all the great children's books I've read for the first time as an adult, because I just don't know what I would have thought of them as a child.

(I am only listing authors who are dead in keeping with our blog's unofficial policy of not discussing work by living authors....not that we have ever even really talked about this, we just don't seem to do it.)
Posted by Libby Koponen at 10:00 AM

I actually only read The Secret Garden two years ago, even though A Little Princess was one of my favorite books growing up. For some reason, I could never get into TSG, though I loved it when I read it at 30.

The Narnia books hold up, as do the Anne books and A Girl of the Limberlost, all of which I've reread faithfully every year or so since first reading them.

I'd actually be interested to reread LW now, as I never liked anything past Meg's wedding when I was a girl. I might have a different perspective on it grown up.

That is all so interesting, especially (to me) about not liking anything in LW past Meg's wedding when you were a kid. I hated Jo not marrying Laurie like everyone else I think but other than Professor Baer I think I liked the grown-up parts.

Definitely the CS Lewis books hold up for me too, though I haven't reread all of them....and it's also hard to separate my childhood love for them from adult reactions.

Thank you for sharing!

Harriet the Spy! I still think it's brilliant. :)

Sadly, A WRINKLE IN TIME did not hold up for me when I reread it as an adult, even though it was one of my favorites growing up. Little Women, Little Princess, Charlotte's Web all hold up for me. I wish I had time to read more of my childhood favorites!

I still can't get enough of THE WITCHES--I think I'll always be in love, and I enjoyed MY SIDE OF THE MOUNTAIN just as much as an adult. I was such a tomboy and always pictured myself running to the mountains and living in a tree.

I agree about Beatrix Potter (I probably love her MORE now) and, sadly, A WRINKLE IN TIME. The others I didn't read until I was an adult -- I love Harriet the Spy too but (thinking from the title that it was about a real spy!) never read it as a kid. Dahl I didn't read until I was an adult either: but I am pretty sure I would have loved him. Anyhow thanks for posting: I KNEW the most interesting part of this would be what other people said, and it is.

WRINKLE IN TIME I have read several times and I continue to love it, though for different reasons.

TUCK EVERLASTING which I adored as a 4th grader, I reread with much trepidation when the film came out and was so glad it held.

Reading aloud to my kids has changed some of my opinions, I thought GOODNIGHT MOON dull (especially the pictures) as a child but now I see (or hear) it is a magically soothing lullaby.

I adored the Little House books when I was 9. They filled up my imagination and we played little house. But now I find them a bit hollow. I realize they were more like research, for our own stories than a text that I got lost in.

And The House of Dies Drear.

And The Westing Game.

And, though they are not from my childhood, should I have children, they will be repeat offenders of awesomeness - The Graveyard Book by Gaiman, Wee Free Men/Amazing Maurice and His Educated Rodents by Pratchett, Howl's Moving Castle by Jones and Inkheart by Funke [only the first].

I just read Howl's Moving Castle for the first time (at the recommendation of a reader of this blog) and I love, love, loved it.

A Wrinkle in Time held issues for me too, sadly. I think it's because I now know too many families with children who have developmental delays that present like Charles Wallace and are denying treatment in favor of believing their kid has magical powers. I can't help but blame Wrinkle for that.