I've been MIA again lately--and I apologize, but my posting will be sporadic until August, most likely.

Two weeks ago I was in Singapore for the Asian Festival for Children's Content. I had never been to Singapore, and was excited to go, mainly because I had heard so many incredible things about the food there! I was, of course, also looking forward to the conference, and meeting friends I only knew through blogs and Twitter, like Tarie Sabido, who blogs at Asia in the Heart, World on the Mind, and is a huge fan of Grace Lin's work. Tarie and I arranged to have dinner my first night in Singapore. I had a bit of a hellish trip over--a delayed flight to London resulted in a mixed connection, and I ended up having to hang out at Heathrow for over nine hours. All was not lost, though, as I got a much-needed mani/pedi while I waited, and still made it to Singapore in time to check in, unpack, and meet Tarie for dinner.

I had been told that I HAD to have a dish called "chicken rice" while there, and so Tarie and I walked over to the nearest food centre, Makansutra Glutton's Bay. There are these food centres all over Singapore, and they're basically outdoor food courts with all kinds of food. We found chicken rice, which is basically rice cooked in a special chicken broth with chicken. It's a very simple, tasty dish. I'm getting hungry just thinking about it.

The next morning Tarie and I met to head over to the festival together. Leonard Marcus gave the morning's keynote, and then there were several breakout sessions. I attended one on translation, and one on the Filipino Book Market--I found both to be fascinating.

In the afternoon, Sarah Odedina, Managing Director of Hot Key Books in the UK, and I spoke together about "Making a Bestseller." (But really, don't ask us how to "make" a bestseller. There's no magic formula.) Author Candy Gourlay has a nice wrap-up at her blog, "Notes from the Slushpile."
She also has a nice summary of the 1st-page critique I participated in on Tuesday.

On Wednesday, Sarah and I once again collaborated, this time on an all-day Master Class. I think the official title was "Editing a Bestseller" but we basically focused on craft in the morning--we talked about character, plot, setting, and dialogue, and in the afternoon we talked about point of view and then did a writing exercise and critiqued each of the 30-something participants' writing, and then ended on a discussion about the business of publishing. I thought it was a rewarding, stimulating day (and hope the attendees agree), but I must say, it was also exhausting and by the end of the day my brain was mush.

But I was still itching to see some of Singapore, and so that night an author and I went to the Night Safari at the zoo. We saw lions, tigers, elephants, giraffes, and more, but I must say, our favorites were the flying foxes and fruit bats (who flew so close to our heads we had to keep ducking) and these scaly anteaters called pangolins.
We then managed to make it to the Long Bar in the Raffles Hotel around midnight for a quick Singapore Sling--the drink had been invented there.

The next day I had lunch at Epigram Books with an editor, Sheri Tan, and the CEO and Publisher, Edmund Wee. Sheri Tan had been an editor at Simon Spotlight for 15 years, and although we had never met in the States, she introduced herself to me at the conference and we had some mutual friends. She was originally from Singapore, and had recently moved her family back there.

In the afternoon, illustrator Isabel Roxas and I met up with a friend of a friend of a friend named Eliza who had attended my masterclass. Isabel lives in Queens, but we had never met before Singapore, although she had visited our offices and met with some other editors. A friend of Eliza's joined us as well, and they took us to see the famous symbol of Singapore, the merlion! Yes, part fish, part lion, and quite cute. 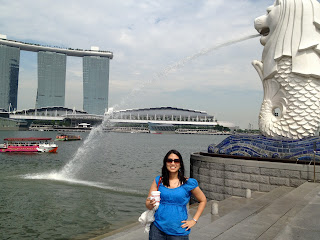 We then went to the famous Orchard Road--an upscale shopping area that reminded me of a cross between Times Square and Fifth Avenue.
We ended the night in the most delicious way possible--famous, Singaporean chilli crab!!! So, so, so, good.

The next day, another Master Class attendee, Katherine, offered to take me around. We got Thai food for lunch, and then wandered around Little India. Then, she dropped me off at the beautiful Botanic Gardens, where I wandered until dinnertime. After a quick and final last chicken rice, it was off to the airport and home for me. What a whirlwind trip it was! 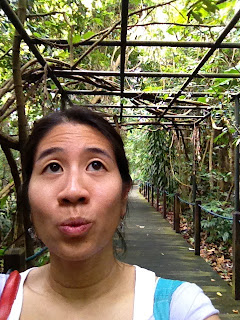 I absolutely loved Singapore, and the AFCC was so well organized and invigorating. Thank you to the organizers and the sponsors, and thank you especially to the attendees and my new friends who showed me around! Thank you so much for your warmth and hospitality.


Two days later (after editing Laini Taylor's Days of Blood and Starlight in between), I was back in the thick of work with Book Expo America (BEA). Here are a few pics:


I also participated in the Middle Grade buzz panel where I talked about Grace's new book, Starry River of the Sky, coming this Fall. You can view that panel and others at the BEA livestream channel here.

It was an amazing, whirlwind conference, and I'm still catching my breath. Now back to regular life! Next up is the ALA conference in Anaheim in two weeks! And away we go again...
Posted by alvinaling at 8:30 AM

Not only was this post really interesting -- I followed some of the links from it and read some great advice on planning a novel.

I found it v. reassuring that the author didn't really plan until the first draft was finished.

I enjoyed all your photos from Singapore. I wish something like this could take place in Korea!

Alvina, I am so, so happy that you presented at the AFCC and that we got to hang out. Definitely one of the highlights of the AFCC for me!!! I am still thinking of ways to get you and Grace to visit the Philippines. :D

Tina, watch out for the Nami Island Children's Book Festival in Korea! I think it is every two years?