Simple but not easy

We have a tradition on this blog of not reviewing books -- and I am all in favor of it. So this isn't a review, just a story about the effect this book had on me.

All my life I've dawdled in the morning -- no matter what time I get up. I can be up at 6 and still happily doing I don't even know what by ten or even noon.

When I worked in other people's offices jobs,  everyone showed up pretty late and worked until midnight or so. One boss insisted on everyone being there at nine. From nine to noon, I just sat in front of my computer -- not out of defiance (though I wouldn't put that past me), but because my brain was a blank.

Yet I am not a procrastinator -- at least when it comes to work for other people. I have never in my life missed a deadline. When I get one, I count backwards from the due date, make a schedule, and stick to it.

But when it comes to my own writing, I DO procrastinate. I know I do my best writing first thing in the morning. So why do I waste that precious time dawdling, drinking tea, writing emails?? On the occasional mornings when I get to work as soon as I get up, I'm always amazed at how carefree I feel for the rest of the day: nothing to feel guilty about, no nagging feeling that I should be writing--I've WRITTEN! And on some of these days, after I do the other things I have to do, I write more.

Recently I decided to try to stop the morning dawdling and read the first part of this (up until he started talking about changing businesses): 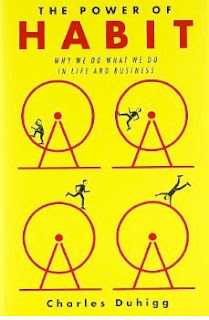 The ideas that helped me are, first, what a habit is. According to him, it has a trigger or stimulus (eg--see chocolate bar on shelf), a behavior (eat chocolate) and an immediate reward (easy to see in the case of chocolate, less so in the case of, say, wasting a morning dawdling). And the way to change the habit is to use the same stimulus, get a reward--BUT CHANGE THE BEHAVIOR. This is simple to say, not easy to do.

One of my freelance clients, who is a neuroscientist, said the author got the reward part wrong --that Duhigg defines it too superficially and too narrowly; it's really your sense of purpose, not the superficial reward, that drives your behavior. If your purpose is important to you and you see how the behavior affects it, you have a much better chance of changing the behavior. And if that purpose includes a larger good--benefits to other people -- your chances are even better.

But back to HABIT: If you perform the new behavior often enough, and get the reward consistently, you will create a craving for the new behavior; and at that point, you have a new habit. People who run or do some other kind of intense exercise  experience this all the time. But you have to believe in your purpose and practice the new behavior often enough (a MINIMUM of three times a week, and every day is better) to create a craving for it. Otherwise, when you get stressed out, you will fall back into your old ways.

The other idea that helped me a lot was what the author called "a keystone habit," a habit that supports all the rest of your behavior (like the keystone in an arch).

For me, it was hard to figure out how to start--I have no clue what the reward of dawdling is. I have such an irregular schedule that it was hard to find a trigger for it, or a keystone habit.

But I finally thought of one: I always, always drink tea soon after waking up. I'm addicted to it. What if I didn't allow myself to have had my first cup until I was sitting at my computer WRITING?

The first week went really well. The rewards are huge -- but I will wait until I've passed the real test -- sticking to it for, say, a month -- to report back on what they are.

Posted by Libby Koponen at 4:37 AM

I love this--hope you pass the text and make it a true habit!

Hmm. Very interesting Libby! I need to think about all of this.

I'm not sure I have any habits I want to break... but a few I"d like to get back/create.

Insightful post. I might try it! I'm the same way (the tea, the dawdling). I think some people just take longer to get going, but then they hit their stride when everyone else is tired.