The more I travel the more I learn about schools lesson plans, librarians' likes and dislikes, and what schools won't accept.

When I was in Georgia last week I was surprised when the librarian explained that she'd ordered a series of nonfiction books on animals... and pointed to one on seahorses. She explained that the seahorse book was going back to the publisher.

Because of the page on mating.

It had a very similar photo to the one below: 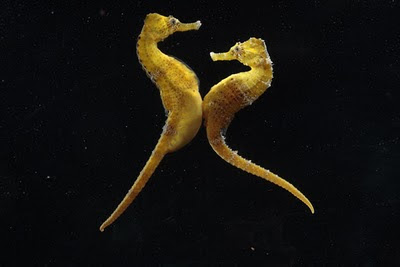 The text for the book series was VERY simple. I didn't read the one on seahorses because it was put on the "return" cart and sent away. But I read the rest in the series. It was for very young kids, with one sentence per page... so the sentence with the seahorses probably said something like, "And seahorses mate."

The librarian's assistant told me she couldn't believe that the library couldn't have the book. Moreover, she said that the book couldn't be at the high schools! What? I said, "But don't they have sex education?" She said yes, but that the kids need to bring in permission slips, etc. etc. Then I commented that what is on TV on a daily basis is FAR worse than seahorses leaning into one another. She agreed whole heartedly.

So for us authors writing nonfiction it becomes a debate: do we risk some school systems not carrying our books or do we play it safe and not include certain subjects?

Posted by Meghan McCarthy at 8:50 PM

Oh my! I worked as a school librarian. I can't believe the librarian planned to send that book on seahorses back to the publisher. When I purchased nonfiction books for our library collection, my utmost concern was the quality of the writing and factual information contained in the texts.

I am a school librarian, and this horrifies me. Please don't think that we're all like that! Kids have the right to access and read all types of information. That seahorse book appeared to be well-researched and age-appropriate. To omit a true blue FACT is a disservice to the reader, and kids will pick up on that type of dumbing down.

What I"m thinking though is that this may not be the librarian's fault: she may be FORCED to do these things via the school district. We live in a part of the country that's more liberal. I'm counting myself lucky!