The tax collector comes to call

Normally I would post this only on my personal blog, but since not much has been posted on BRGs lately for various good reasons, I thought I'd post it here.

I was having breakfast awhile ago--while it was still raining hard all day every day -- when there was a knock at the door. It was the tax collector, over on the boat to inspect my hut and see what sort of tax I owed. Scotland is NOT like the US, and I asked if he would mind taking off his shoes (standard here) and he did, setting them neatly by the door before stepping inside. Then I offered him a cup of tea, which he accepted (also standard here). 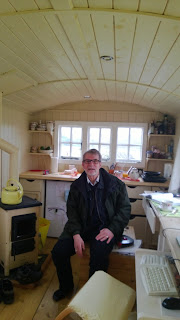 Then he told me that I wouldn't owe any taxes at all -- there is no tax ever on "unimproved land" in Scotland, nor is there tax on properties producing less than £10,000 income (this is to protect small businesses in remote places especially), or worth less than a certain amount -- I forget how much.

This good news settled, he proceeded to ask me how much I had paid for my land, and marvel at the bargain I had got.

Scotland has many agreeable and unusal, to me, laws:

This last may figure in my next book (not the one I'm writing now, the one after that).

I love that last law!