A FOUR HOUR BUS RIDE
or
"Sing,sing, it's my favorite thing!"

Last weekend I went on a town ski trip: meet at 5.30 am (it was dark except for the moon) and all get on a bus to go to Killinton, VT. I sat next to a friend's six-year old son, armed with a deck of cards and a notebook, so I could write while he watched the DVDs I knew his mother had packed for him.

We played a hand of GO FISH! and then I said,
"What do you want to play now?"
"Something that isn't cards," he said. "Let's write!"
I was a little taken aback and he went on:
"Remember that time you wrote down all my favorite foods? Let's do that."

This rapidly progressed into contests and BOTH writing, one on each side of the page. We made lists of:
* friends (the contest: to see who had more)
* favorite sports
* favorite songs


- and when my list got longer than his, he started making up songs ("Sing, sing,
it's my favorite thing!" was one) and singing them aloud -- and when that failed, scribbling on my list. 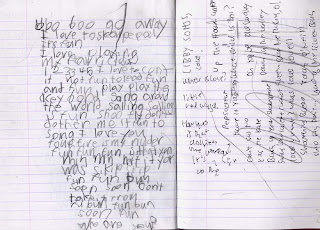 He sang a lot -- just for the joy of it, the way kids do. Earlier on the trip, I had been remembering how on long car trips when I was a child, we ALWAYS sang (not just my siblings and I, but everyone on school trips in buses, did, too), and wishing kids still did -- it's so exhilerating, even if you have a horrible voice as I do. And it hadn't even been my idea and Adam was singing. He never even took the DVD player out of his knapsack: we played, sang, talked, laughed, wrestled, snacked, and wrote the whole way to Killington.

So what's my point? Maybe kids haven't changed as much as it sometimes seems they have. It wasn't just Adam: on the way home, while he slept, the older kids very politely asked if they could borrow the cards. If people don't find it boring, my next few posts will be about real children; and I'd love to hear your stories in the comments.

This is partly inspired by Adam, partly by an NPR show on Kid Logic. My favorite was the four year old on the plane who said,
"When are we going to start getting smaller?"
Posted by Libby Koponen at 1:12 PM

Oh, I loved that "This American Life" episode.

One real kid story I have: one of my friends when she was little was watching her favorite show. When she was in the middle of it, her mom told her they were leaving to go to the store (or somewhere) so she decided she would unplug the tv, which would in effect "pause" the show so that she could continue where she left off when she got back. Needless to say, she was incredibly upset when she got back and found that wasn't the case.

I remember one time driving in the car at night when my daughter was three or four years old. She stared out the car window and asked, "Why is the moon following us?"

I don't know if it's kids who have changed so much--I think it's the times that have changed. I believe some of today's youth are hungry for attention from the adults in their lives--adults who are often too busy to spend much time with their kids.

Thank you all: I'm really glad you want more of these stories! And I hope you will all send them too -- I love that child unplugging the tv to pause the show. I never thought of it until now but the kids' conclusions are often wildly hopeful. I like that.