If you haven’t read my interview with Janet and Julie yet, I suggest you check that out before you read today’s post.

Elaine: Does either of you have any other books that will be published in 2007?

Julie: I am very excited about a book I illustrated that is coming out later this year from Henry Holt. It is called GLASS SLIPPER, GOLD SANDAL: A WORLDWIDE CINDERELLA and it was written by Paul Fleischman. It weaves together Cinderella stories from all around the world. It will be released in September.

Janet: Do you know about BEFORE IT WRIGGLES AWAY, my Meet the Author book (Richard C. Owen Publishers) that came out in January of this year? It's still not available through amazon.com (groan), but RC Owen sells it directly:
http://www.rcowen.com/MTA-JanetWong.htm 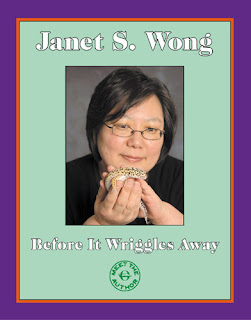 A Sneak Peek at a “Potential Project” from Julie and Janet

Elaine: Do the two of you have any plans to collaborate on a fourth book that you'd be willing to share with us?

Janet: Julie and I currently aren't actively working on a new collection but on a possible collection. Let's see if Julie is interested in "going public" with that, though, since it's still very tentative...

Julie, do you want to share an image from your Liberty Notes along with one or two of my DECLARATION OF INTERDEPENDENCE poems?

Julie: I'm happy to talk about this possible project! I've attached two of the images illustrating the 1st amendment (freedom of speech) and 4th amendment (freedom from unreasonable search and seizure) from a series of cards I made and sell to benefit the ACLU. The National Endowment for the Humanities recently used one of the images (The Pursuit of Happiness) in a library program they have.

Janet: Here's the text of the poems "Liberty" and "Declaration of Interdependence," both written to go with Julie's Liberty Notes (and hoping that they will be part of a fourth book called DECLARATION OF INTERDEPENDENCE): 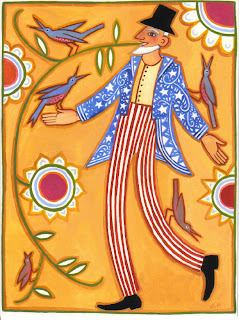 Declaration of Interdependence
by Janet Wong


We hold these truths to be not-so-self-evident

(but think about them a while, and hopefully you might agree):


all men are created equally a puzzle, made up of so many parts;

each of us makes up part of the greater puzzle that is our nation.


Lose one piece and the picture is incomplete. Recognizable, but

what happens when too many pieces, one by one, become lost?


Life, Liberty and the pursuit of Happiness: do your best to find

the pieces that fit, that need you, as much as you need them.

Freedom from Unreasonable Search and Seizure 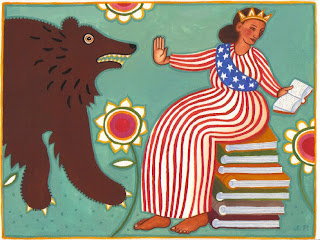 that make us America


To listen, to look,

to think, and to learn

Elaine: Janet and Julie, Thank you so much for the wonderful interview and for an inside look at your collaborative process that brought us TWIST: YOGA POEMS—your third fine book of poetry and art. I do hope the “possible” project that you two have been working on gets published in the not-too-distant future. It looks like a great book in the making!
A Few More Words

I’d like to tell everyone how much I enjoyed conducting my “interview via email” with Janet and Julie. They responded promptly to all my questions and were so forthcoming with information about their author and illustrator process for TWIST: YOGA POEMS that writing up the interview for Blue Rose Girls was easy—easy once I color coded their responses in my Word document draft.

I should tell you, too, that it was Janet who suggested I include Julie in the interview. I had originally planned to write a blog interview with Janet about her poetry books. When I saw a copy of TWIST, I wrote Janet to tell her how much I liked the book—and Julie’s gorgeous illustrations. So Janet asked Julie if she’d participate with her in an interview about the book. How lucky can a blogger get?

Two Other Great Poetry Books by Janet and Julie
NIGHT GARDEN: POEMS FROM THE WORLD OF DREAMS (2000) 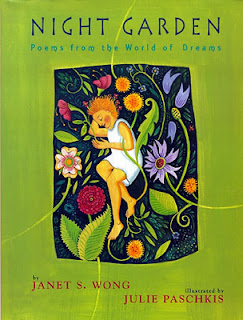 KNOCK ON WOOD: POEMS ABOUT SUPERSTITIONS (2003) 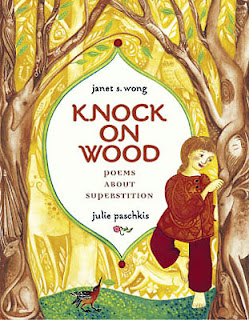 (Both of these books were published by Margaret K. McElderry Books.)

Posted by Elaine Magliaro at 3:00 AM

I was introduced to Janet Wong's work about 4 years ago, and have become one of her biggest fans ever since! Janet's work has become a staple in my library and near my nieces bedsides! One word for you Ms. Wong - BRAVO! And we always look forward to your next masterpiece.
M. Olivier

I met Janet a few years ago at a children's literature institute at Simmons College in Boston. At that time, I was already an admirer of her work. She is a dynamic speaker and very personable. I love her books--especially A SUITCASE OF SEAWEED...and all the poetry collections she has done with Julie Paschkis. I read Janet's APPLE PIE 4TH OF JULY to the students in my children's literature course every semester.
Her books are a staple in my home library, too.

I'm so excited to see TWIST! I have a friend who teaches yoga to children in England and I'm going to buy a copy and take it to her when I visit her in May. So it's crossing the ocean, with me! Meg

Such synergy -- the rich simplicity of Janet's poems and the rich complexity of Julie's paintings. Another great collaboration -- interesting to read about how these two women work together. I can't wait to give TWIST to my yoga-teaching friend, too. Laura.