We had some frigid, blustery weather in my neck of Massachusetts during the first full week of March and an ice-rain-snowstorm stopped by my way for a visit Friday and Saturday. That’s typical for New England—just when you think spring is on the way, winter roars back like a wild cat. This month has also been one that entered my life like a children’s literature lion. On March 7th, award-winning author and Native American storyteller Joseph Bruchac was the speaker at our winter meeting of the PAS North Shore Council. (You can read more about his visit here at my Joseph Bruchac post.) Then, on March 14th, Jim Bruchac, Joe’s older son, arrived on the scene. On Wednesday evening, I had the pleasure of having dinner with Jim and Sue Gravel, the person who had arranged for Jim to be a visiting author in the Marblehead Public Schools for two days. 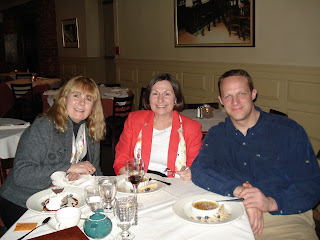 I got to know Jim two years ago when I arranged for him to be a visiting author in Marblehead in 2005. He was such a tremendous hit with teachers and students that he was invited to return to Marblehead again this year. In fact, his 2005 presentations were so well received that he was also asked to be a visiting author at the Saltonstall School in Salem twice last year.

In addition to being an award-winning author and the son of Joseph Bruchac, Jim is also a talented Native American storyteller, tracking expert, and a wilderness instructor and guide. In 2005, Jim and his father received a Conservation Achievement Award from the National Wildlife Federation—and, in 1999, the Wordcraft Circle of Native Authors and Storytellers nominated Jim as Storyteller of the Year. 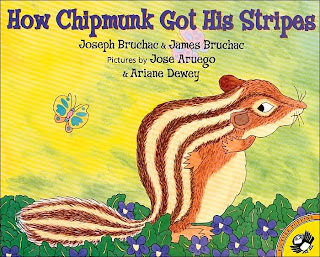 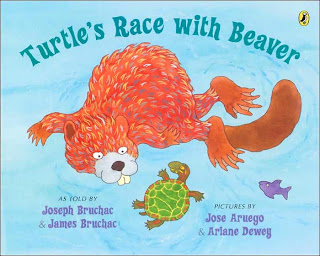 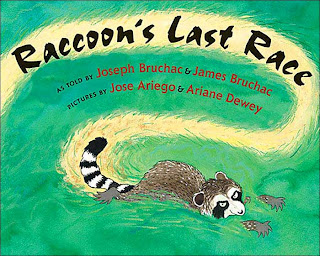 I sat in on one of Jim’s storytelling sessions with second graders at the Eveleth School in Marblehead on Thursday. Jim encouraged lots of student participation as he related two Native American pourquoi tales: the story of how brown squirrel (chipmunk) got his stripes and the tale of how rabbit lost his long fluffy tail. Jim also explained why he and his father had added the grandmother character to their written version of the chipmunk story. It was a literary device to help convey the story's message to readers. 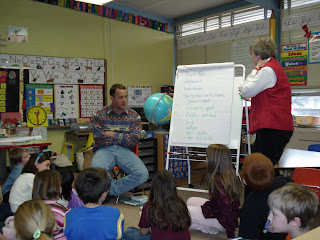 After Jim captivated his audience with his storytelling prowess, he had the children participate in writing a pourquoi tale of their own. I won’t go through the whole process—which was great—but I will tell you that the children created a collaborative story of how porcupine, an animal who always did as he wanted and never listened to the advice of others, got his quills. 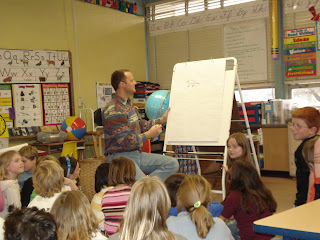 As children presented their story ideas to Jim, he drew pictures—and Carol Arnould, one of the teachers, wrote down the tale on chart paper. At the end of the drawing/writing process, the students helped “retell” the tale they had just created.

I should add that Jim also brought some plaster casts of animal tracks he had made. He asked the children to look at them carefully and to try to deduce what animals might have made the tracks he showed them. Altogether, Jim’s session of storytelling, story writing, and discussion of animal tracks added up to a truly enriching educational experience for this interested and well-prepared group of youngsters. 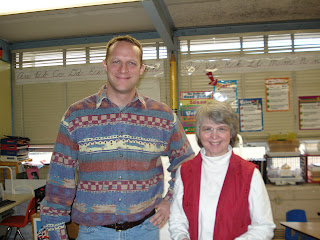 Jim Bruchac and Carol Arnould
(Carol and I worked together at the Malcolm Bell School in Marblehead in the 1970s.)

You can read more about James Bruchac at his website.

Visit the Ndakinna Education Center website to learn about its wonderful programs for adults and children.

Jim Bruchac, as Director of the Ndakinna Education Center, is also responsible for overseeing the Saratoga Native American Festival. The 2007 festival will be held on the grounds of the Saratoga Performing Arts Center on September 29 & 30.

Posted by Elaine Magliaro at 8:45 AM

Hi Elaine,
Thanks so much for sharing. This sounds like it was a wonderful experience for the kids. We had a Native storyteller visit my second grade classroom when I was a child, and it still stands out as one of my fondest memories of school.
I love the dinner picture, as I can finally put a face to name now whenever I read your comments and posts!
Regards,
Tricia

Jim does a great job with his storytelling sessions. Both he and his father, Joseph Bruchac, are two of the nicest people I have met. I was really upset that nearly all the photogrpahs I took of Joe came out blurry.

In the photo of me at dinner with Jim and Sue, you may notice I was wearing a springy looking outfit. Well...it was 70 degrees on Wednesday. Then, on Friday, we had a snowstorm! One's never quite sure when winter's going to end up here in New England.

I do a collaborative writing program and am very interested in Jim's porquoi tale process. Can you email me privately with more info?

Very cool, Elaine!
It was great to see a picture of you too :)