I always seem to forget it's my turn to post when a holiday weekend comes along. I haven't really thought about what to write about today, but as it seems that people are most excited about my mention in my IRA wrap-up that Jerry Spinelli named a character after me in Love, Stargirl, I'd might as well tell a little more about how that happened.

I've been a slacker about writing about the books I've edited that are out now, but I do mean to post about Eggs by Jerry Spinelli soon. Last year while we were working on that book together, Jerry emailed me and said he had an odd request, that he'd been struggling with the name of a character in the Stargirl sequel, that she had already gone through three names and he'd finally settled on one that fit--"Alvina." He said she was nothing like me, that she was actually a bit of a curmudgeon, and if I felt uncomfortable with that he'd find another name, but of course I was thrilled--what an honor! And now I've read the ARCs, and indeed, Alvina is quite an unpleasant character--in fact, another character says, "I hate Alvina" several times at the beginning of the book. But I love it. I love that I'm hot-tempered and scrappy and mean. And I know it's not "me"--it's a different person that shares my name, but as I don't get characters with the same name as me very often, I can't help but identify with her. My coworkers joked that this might spur a whole new generation of kids named "Alvina."

Speaking of characters named after me, there are two other books I should mention.

Some of you might remember Grace's picture book Olvina Flies that came out in 2003. It's a book about a chicken named Olvina who is invited to a bird convention and doesn't want to go at first because she's embarrassed about having to take an airplane there while all the other birds fly. Grace posted about the backstory behind the name on her website here--basically, I told her that a foreign publisher had sent me a fax at work addressed to "Olvina," and her first reaction was the laugh and say, "Olvina, that's funny. That's the perfect name for a chicken!" (Isn't it weird how creative people think?) And now, the sequel is out, Olvina Swims. 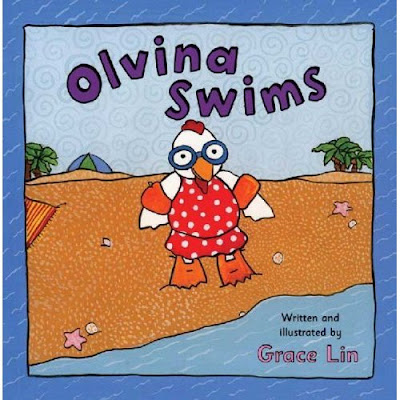 I had known that the sequel was coming out soon, and a few months ago I asked Grace when exactly, and she said, "Oh, at the same time as Lissy's Friends." And I said, "WHAT?!? And you're having a whole big book launch party for Lissy's Friends and not for Olvina Flies?!" The other BRGs joked that Ki-Ki and I should hold up signs of protest at the book party, Ki-Ki because the doll/book are about the other sister, Lissy, and me because Olvina is being neglected. But we're bigger people than that. :)

But don't forget about Olvina Flies and Olvina Swims! I love how Grace draws animals. These books are reminscent of Richard Scarry books. Although I will say that, just as in the case with Alvina in Love, Stargirl, Olvina is nothing like me, either. I'm not a chicken, I'm not afraid to fly. But I will have to start training in my swimming soon if I'm really going to do a triathlon this year...I should take inspiration from Olvina.

And I'd also like to point out the last of the BRG interviews over at 7-Imp. Check out Libby's interview here!

Thanks to Jules and Eisha for doing the BRG series. It's been great! If you missed any of the interviews, they have a nice wrap-up with links at the bottom of Libby's interview.

Happy Memorial Day, everyone. I'm off to Coney Island today to ride the Cyclone!
Posted by alvinaling at 10:12 AM

Email ThisBlogThis!Share to TwitterShare to FacebookShare to Pinterest
Labels: alvina

Alvina, maybe I'll put you in one of my books next... perhaps as a sharp-toothed-child-eating monster. That sounds about right.

I can't wait to see Olvina Swims! I loved the first.

I knew I'd seen that chicken somewhere before! When Nina mentioned it to me, and when I mentioned it to you at IRA, the chicken named Olvina seemed so familiar but I couldn't place it. But now I know, seeing the illustrations--I saw an exhibit of Grace's work at the Eric Carle picture book museum. It has to be at least 3 years ago now, when the Seuss exhibit was up. I remember thinking how much I loved that chicken. Not being in picture books and tending toward scatterbrainedness, I always meant to find that picture book but had forgotten to write down the illustrator. :) Now I know!

Wait. Maybe not. *Has* Grace had her work in the Eric Carle Museum? It might be another chicken I'm thinking of, dangit. But if it is, that's cool. If not, I don't care, I still think Olvina's great.

I've been eagerly awaiting LOVE, STARGIRL. And now I have one more reason to look forward to reading it!

Good luck with training for the triathlon. I always watch the Iron Man on TV every year just so I can cry at everyone's back story. Waahhh!

Woo hoo! I love the Olvina story! I knew there had to be something fun there. :D