Last week I was traveling yet again, this time to Atlanta for the International Reading Association (IRA) conference. I have a soft spot for IRA, as it was the very first conference I attended, back when it was held in San Francisco. I think it was back in 2002--I was just an assistant editor and it was all new and exciting for me. This year, I was quite excited to check out Atlanta. My father has a PhD from Georgia Tech and was finishing up when I was born. We moved away when I was about 9 months old, so I have no memory of it, and haven't been back since. From the little I saw of it, it was a cool city, but I'll have to go back when I have more time to explore--I didn't end up leaving the downtown area all week.

It was quite different from last year's under-attended conference in Toronto. We had a heavily-trafficked booth, partially because of our booth location (right near the entrance), and perhaps also because everyone who skipped out last year came this year. This, added to the fact that one of our colleagues wasn't able to make it at the last minute, leaving us short-handed and scrambling, resulted in all of us being busy from morning till night. I found myself with barely a spare minute all week.

I hadn't quite been prepared to see the extent of the damage from the tornado that hit the downtown area in March. Some of the hotel rooms in the Omni were damaged, although mine was untouched. Jerry Spinelli said that one of the windows in his room was held together by duct tape. "But it seemed study," he said--he had pushed on it. (!) Thank goodness it held.

Here's the view from my hotel room. You can see some damage in the building on the left. 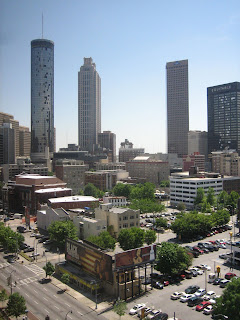 And here's a closer photo of another building with extensive damage (I think this is actually one of the towers of the Omni). 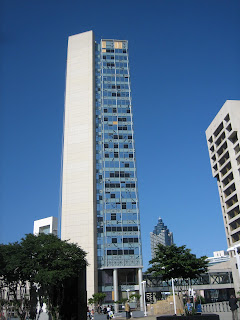 Here are a few pics of the booth: 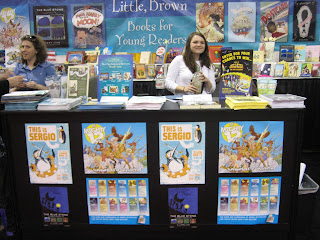 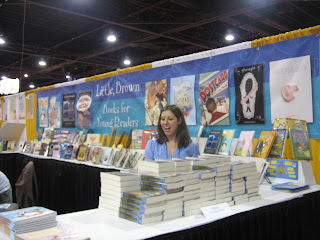 We had seven authors/illustrators at the fair: Jerry Spinelli, Gail Giles, Joan Steiner, and Jerry Pinkney for the first half, and then Wendy Mass, Chris Gall, and Sherman Alexie later in the conference.

I'm not going to give the detailed play-by-play of this year's conference, and I didn't end up taking as many pictures as I usually do, but here are a few highlights:

I had met fellow editor Stacy Whitman for the first time at last year's IRA, and we managed to meet up again this year for some ice cream in the CNN center food court. Here's Stacy, and she has a wrap-up of the conference and more pics on her blog here. 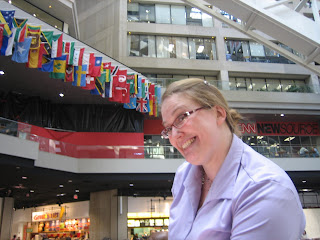 Because we were short one staff member, the only session I was able to attend was the one with Wendy Mass and Pam Muñoz Ryan, which was excellent. I hadn't heard either one speak before, and found both to be passionate, heartfelt, and poised. 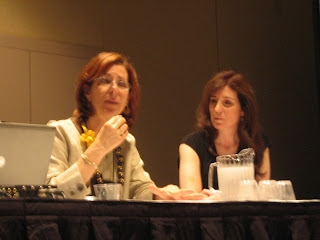 Later that day I ran into Lisa Yee while on the floor. Earlier in the conference, I had asked someone if "Lisa Yee had taken out her Peepy" which I realize sounds a bit weird. But here we are, and yes, she took out Peepy. Lisa is holding up her iPhone which had almost this exact same picture on it (except, of course, without the iPhone)--too bad it didn't show up. 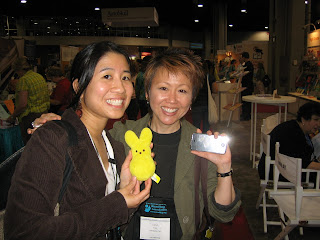 Wendy had three signings after her panel, one at our booth, one with Scholastic, and then one at the Anderson Book Shop booth. I got a call from her during her last signing. "You have to come over here and see what's going on," she said. She wouldn't tell me more. I made it over and took a double take. There was quite a crowd, cameras flashing, women squealing. Do you recognize the gentleman sitting next to Wendy? 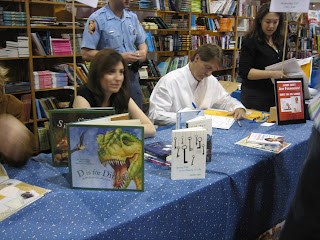 It's Jeff Foxworthy! Needless to say, Wendy didn't get much attention at that particular signing (but at least her other two signings were great). She was a good sport about it, though, and came away with a signed book for her kids, and a story to tell.

It was a conference full of author signings (back to back to back to back on Tuesday), dinners, cocktails, authors, editors and other publishing folk, and of course books books books. I didn't have too much time to walk the floor, but I did manage to snag the new Sharon Creech (Hate That Cat) and Andrew Clements (Things That Are--although I haven't read Things Not Seen yet).

We ended the fair on a high note, with a signing by Sherman Alexie on Thursday morning. The last day of the fair is generally quiet, so it wasn't quite the frenzy that we were expecting (although a few die-hard fans started lining up over a half hour before the signing), but Sherman stayed in the booth for a full hour and a half signing away. And for you fans out there, you'll be happy to know that his follow-up to The Absolutely True Diary of the Part-Time Indian should be out next Spring. 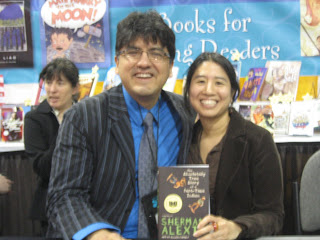 Thankfully, I don't have any more work travels until ALA at the end of June, although the hectic schedule isn't ending. I'm scrambling to edit all of my Spring 2009 novels right now so that they can go into copyediting by the end of the month. And this afternoon is our library preview for our Fall 2008 books (read about some of our previous ones over at Fuse #8 here and here). Stay tuned to find out who our surprise guest will be.
Posted by alvinaling at 7:39 AM