I keep forgetting to post. I've been completely out of it lately and far too preoccupied with things such as doctor visits and redesigning my website. The goal for the new design is to put my artwork on every page and to give the thing a more cohesive look... but not completely the same on every page. I want to hammer home the idea that I'm a nonfiction book author.

Anyway, I said maybe sometime last week that I'd talk about my first school visit but I never got around to it. The evening before started out with a drive to CT at 10 at night. I got stuck at an evil gas station and cheated out of 25 bucks. Some stupid gas attendant thought it would be cute to put oil and break fluid into my car without my permission and then proceeded to charge me. I was too late to put up a big fight so I drove on. I got in at about 1 am and settled into the hotel room so that I could continue my obsession of trying to make the power point talk perfect. It never reached perfection. Maybe next time.

The next morning I fussed with it more and drank some coffee with powdered creamer. This made me a tad late. Well, not late, but not really on time or early... whatever that means. It was raining and as soon as I got out of the car a woman came running out of the building and said, "You must be Meghan! I hope you're a calm person because you're supposed to start in 10 minutes!" I nodded and said hello and thought in my head, "Oh yeah, Meghan is a calm person." And I was. I didn't seem to care that I had no time to set up. Oh well. That way there was no time to be nervous.

The talk began on an adorable note. (Yes, that means I wasn't involved). Two girls were assigned the role to introduce me. Somehow they had managed to dig up some interesting information and said "Meghan does not like public speaking." I laughed. How did they know!

My talk started out with an introduction of what an author and illustrator is and then launched into my own childhood goals, which involved many things such as being in the Olympics. I also shared how my parents had some important rules. 1) No TV (the kids howled) 2) No video games (the kids howled louder). I explained how this forced me to be creative. I played a lot and I drew a lot. I didn't sit around doing nothing a lot. I illustrated how my art improved through the years and then talked about what it took to get published. I also explained how a book gets made, complete with plane trip to China or some other 3rd world country.

So all went well. Very well. The teachers seemed pleased. The organizer was pleased. Even the principal was pleased. They took my computer upstairs to set up for the next talk and left me alone to eat a piece of pizza (pizza upon my request. No health food) and sign the huge stack of books. Then in came the organizer. "I hope you're a calm person!" she said again. Hmm. These were becoming familiar words. "Something popped up on your computer! I didn't know what to do so I unplugged it!"

This is what popped up in front of 200 children or so. It's a photo on my screen saver--I have an "abandoned" series. This is one of many B&W shots and I forgot that this particular one was on there. 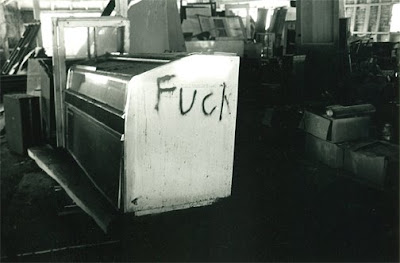 Apparently one child began tugging on his teacher and saying that a bad word was on the wall. She ignored this until she turned around and saw it for herself. Havoc broke loose. "They'll be talking about this for a while" said one teacher. "I heard about the F bomb,” said a parent.

Oh yeah, I know how to make an impression!

Ignoring this little faux pas I was told I did a great job--top 1%. I'm pretty proud of myself because I really do hate public speaking. I had an out of body experience while doing it... watching myself... thinking... wow, you are really doing it... AND doing a good job.

So I've patted myself on the back. I'm glad I pushed myself to do something that was uncomfortable for me. Now I'm open to doing it again. And I promise I'll remove the Fuck picture for next time.

And you have a story that you'll never forget. One that, indeed, make the rounds of Things That Can Happen On Your Author Visit. Glad you were calm.

This makes me feel better about the time I wore mismatched shoes to a school visit.

Awesome! You can use that picture for a conference talk about school visits!

glad you got over the first hurdle. The kids can really be funny, can't they?!

Ha ha ha, oh my god Meghan, that is hilarious. You must be an amazing speaker to overcome that!!

This kind of beats my intro where I tell the kids in the autotorium, "School sucked" :)