I'm writing this post on Sunday night in my hotel room in Boston while watching the Golden Globes. I've been here since Friday for the American Library Association Midwinter Conference, and as actors and writers and directors, etc. all collect their awards, I'm trying not to think about our awards, the ones bestowed by the venerable American Library Association. I was burned last year, and on a roller coaster ride the whole weekend before the announcements, and was determined for that to not happen this year, and for the most part it's worked. I've managed to not think about it too much (yeah right).

That aside, I've set this the post automatically at 8:30 AM, so by now we all know which books have won, so I'll just give a general CONGRATULATIONS to all the winners! Although I have a few predictions and hopes, for the most part I have no idea what is going to win.

It's been a great conference so far. On my train to Boston on Friday, I saw a woman reading Grace's Where the Mountain Meets the Moon. Fun! Friday evening, Grace hosted a lovely dessert party at her home. Great company, conversation, and of course tons of dessert! Including Grace's delicious red velvet cupcakes. 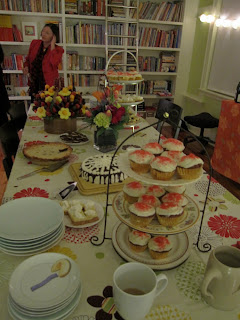 Midwinter ALA is probably the most mellow of the conferences for me, as we don't tend to host authors at this conference--so no big events and lunches and dinners. Instead, we have one morning preview breakfast (Saturday morning) where we highlight some of our upcoming books to a select group of librarians. Here's the swag: 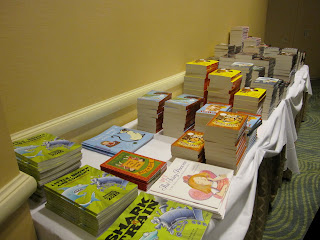 And then at the end of the breakfast, we had surprise secret guest speakers Andrea and Brian Pinkney, creators of the amazing book Sit-in: How Four Friends Stood Up by Sitting Down. 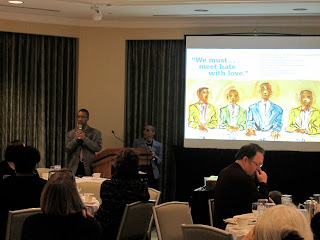 Then I headed off to the convention center: 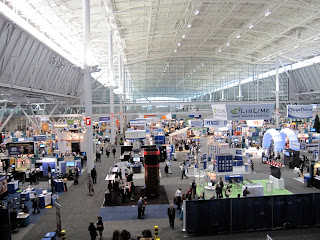 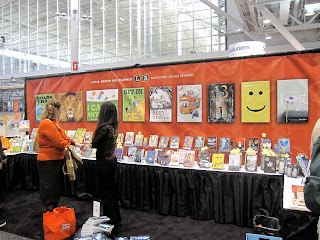 Saturday afternoon I attended the "Great ALA Midwinter Kids/YA Lit Tweet-up" along with Anna and Grace. The Tweet-up was organized by Mitali Perkins and Deborah Sloan, and was a rousing success. It really was the place to be, as shown by all of the party crashers who showed up! It was so successful and well-attended that there were so many people there that I didn't end up seeing at all. Ah, well. Next time! 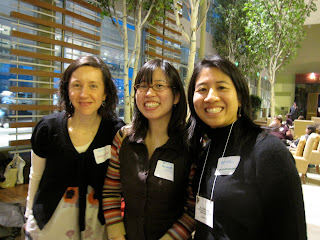 Sunday I had a lovely breakfast with agent Lauren MacLeod, and then an equally lovely lunch with agents Erin Murphy and Ammi-Joan Paquette. Then it was off to the BBYA teen feedback session. There seemed to be fewer teens than in previous years, and the session barely lasted an hour, but there were still some gems. One girls said that Shaun Tan's Tales from Outer Suburbia "Made me feel like a little kid again, in a good way. I loved it!! I loved it so much." Of Catherine Jinks's The Reformed Vampire Support Group, on teen said, "Yeah, it's another vampire book, but that's okay--it's a good one!" Another teen about an issue book: "I'm wondering if all authors think all teens have issues?"

The three favorite books on the list for the teens seemed to be Fire by Kristin Cashore, Catching Fire by Suzanne Collins, and Swim the Fly by Don Calame. Of the latter, one teen boy said, "This was my favorite book I read in 2009." Another teen said that she was so engrossed in Catching Fire that she forgot to eat.

I listened in on the Notables Committee for a bit as they discussed nonfiction (including a somewhat baffling debate as to whether giving animals names implies anthropomorphism), and then back to BBYA.

And finally, Sunday night I went out to Somerville again to have dinner at an old favorite, Redbones. Here's a pic of our feast, and friends: 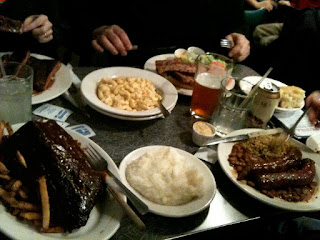 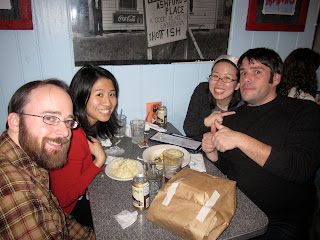 And now it's past 11, the awards are over, and it's time for bed. After the awards announcements I'll be manning the booth until the convention floor closes, and then will sit in on BBYA again before heading back to NY. If you're still at the conference, come find me and say hi!
Posted by alvinaling at 8:30 AM

Email ThisBlogThis!Share to TwitterShare to FacebookShare to Pinterest
Labels: ALA, alvina, conference, wrap-up

No burns this year, baby. WOO-HOOOO!