I finished my rough draft of "Dumpling Days" late at night on Friday (really, Saturday morning) and I was euphoric. The first draft is always the hardest for me. The next step, revising, is comparably quite fun. Even though revision usually takes longer, it's that initial output that is torturous for me. I always hit a point where I yield to poor quality, over-sentimentality and any other writing sin you can think of just so I can "get the thing out!" (I depend on the revision process to get things in readable condition.)

So, finishing my rough draft (emphasis on "rough") was a big accomplishment for me. I was absolutely thrilled when I wrote "The End" and the first thing I did afterwards was to go online and buy some bedsheets.

But not just any bedsheets.

I bought these sheets that had surprised me in a catalog a couple days earlier. When I saw these sweet, cherry-patterned sheets on clearance I almost jumped (okay maybe I did jump, just a little hop). 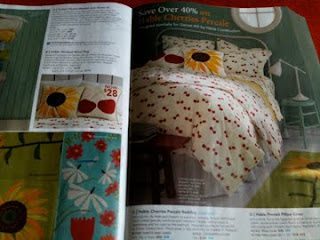 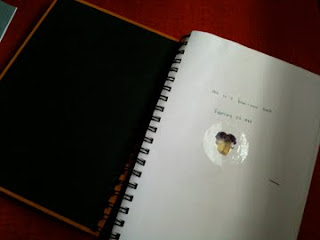 was a ripped catalog page with almost the exact same sheets: 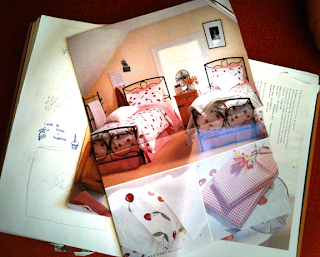 I had coveted cherry-patterned sheets over 10 years ago but was too poor purchase them. In 1999, with my extremely modest first book income (as well as part-time bookstore clerk wages) the luxury of matching sheets (no matter how pretty) was a frivolous expense. Rent and ramen noodles was all I could afford then, so the 2nd best thing was to clip the catalog pages and keep them as a little dream.

That I made come true 10 years later! A nice little personal reward, don't you think?
Posted by Grace Lin at 8:00 AM