from the BRG archives: 'Tis the Seasons

Poetry for the Seasons

I am a former elementary school teacher. I spent thirty-one years in the classroom. I also served as librarian at my school for three years. I know from my experience that one of the most popular subjects for poetry to share with elementary age children is poetry about the seasons. Teachers always asked to borrow seasonal poems about colored leaves, pumpkins and jack-o'-lanterns, migrating birds, snow and winter weather, hibernating animals, sledding and ice skating, kite flying, flowers blooming, April showers, and the return of spring from the poetry file I kept in my second grade classroom—and later in my library. I was happy to oblige. A true enthusiast, I was always proselytizing with poetry.

So today, for Poetry Friday, I thought I would review three books of seasonal poetry. These are not hot-off-the-press books. Two were published in 2003 and one was published in 2002.

SEASONS: A BOOK OF POEMS
Written by Charlotte Zolotow
Illustrated by Erik Blegvad
Published by HarperCollins (2002)

SEASONS is An I Can Read Book. Its poetry is perfect for beginning readers. The vocabulary in this book will not intimidate children who are just learning to read independently. The poems are short—many are no more than six or eight lines long. The book contains poems that rhyme as well as poems that do not rhyme. While most of the poems speak about the weather and other signs of the four seasons—snow, falling leaves, summer winds, spring rain—there are poems that touch on other subjects as well—shadows, a pet cat, anger, watching an airplane flying across the nighttime sky. Erik Blegvad’s charming watercolor and ink illustrations—some of which conform to the shape of particular poems—are a perfect complement to Zolotow’s poetry for early readers.

Don’t let the small size of this book fool you. It is quite a substantial collection containing forty poems. SEASONS is a book of poetry that is perfect for use in kindergarten through the second grade.

Here are two examples of the simplicity you will find in the poems Zolotow wrote for this book:

The winter snow melts away
and the air is soft this sunny day
What does this gentle wind sing?
I know! I know!
Here comes Spring!

In the early summer morning
after the rain
small spider
your gray lace web
sparkles with diamonds
of
dew.

I can attest to the fact that many of the struggling readers I taught in second grade found the “I Can Read” poetry collections and anthologies published by HarperCollins safe, comfortable books to read in class and at home with their parents. Lee Bennett Hopkins, one of America's foremost experts on children's poetry, is the editor of many of the “I Can Read” anthologies. His name alone speaks to the quality of the books.


Barbara Juster Esbensen, the recipient of the NCTE Award for Excellence in Poetry for Children in 1994, is one of my favorite poets. Esbensen, who passed away in 1996, was a master of imagery and a true wordsmith who used language in elegant and inventive ways. I was ecstatic when one of her out of print poetry books, originally published in 1965, was reissued in 2003. The new edition of SWING AROUND THE SUN is a lovely book with full color illustrations created by four different artists.

SWING AROUND THE SUN is a collection of poems about the four seasons. Each of the book’s four artists illustrates the poems for a particular season: Spring poems are illustrated by Cheng-Khee Chee, summer poems by Janice Lee Porter, fall poems by Mary GrandPre, and winter poems by Stephen Gammell. This collection is one of just two books of rhyming poetry Esbensen penned. (Her other book of rhymed poetry is a delightful collection entitled DANCE WITH ME, which is now out of print.)

In SWING AROUND THE SUN, Esbensen captured the different flavors of the four seasons in her fine poetry: the fading of winter as birds, rain showers, and warmer days return in spring; the lightning storms, fireworks, and yellow of summer; Halloween, golden leaves, and the “pointed flavor in the air” foretelling a dramatic change in the weather at the end of autumn; snow, ice, and the steely cold of winter. One feels the passing of a year when reading through this collection. The book’s four artists, for their part, have captured the essence of Esbensen’s poetry in their illustrations.

A yellow buzzing
Prints the air;
In dappled yellow
Dreams the pear.

And from the finch’s
Yellow throat
One golden, flowing
Yellow note!

The Wind’s white fingers
Are thin and sharp,
And she plays all night
On any icy harp.

On her icy harp
Of stiff, black trees,
She plays her songs
And the rivers freeze.

I would share the poetry in this book with children from first grade through middle school. I recommend buying this book while it is still in print.

Note: I send my gratitude to the editors at Carolrhoda Books who made the wise decision to reissue this wonderful book of poetry.

A CHILL IN THE AIR: NATURE POEMS FOR FALL AND WINTER
Written by John Frank
Illustrated by Mike Reed
Published by Simon & Schuster (2003)

In A CHILL IN THE AIR, Frank’s poetry and Reed’s art work together nicely to transport us, in words and pictures, from the bright colors and berry picking of early fall to the ice-blue cold of winter. Some of Reed’s uncluttered illustrations--rendered in acrylic paints--of freezing rain, icicles, a fox huddled near the mouth of a cave as snow swirls outside almost give me goose bumps. The text for the book, set in Highlander and Gill Sans, is large and bold and placed on each page so that the poems are easy to read.

Frank’s poems are straightforward—and most of them rhyme. His poetry doesn’t contain much imagery or figurative language. Frank does make use of personification in a few poems. Here’s an example:

The winter wind’s a clever thief:
He’ll join with you in play,
Then slip his hand inside your coat
And steal the warmth away.


And here is a shape poem from the book entitled Icicles:

A CHILL IN THE AIR is definitely a book of seasonal poetry I would want to have on hand in my elementary classroom to share with children during the autumn and winter seasons. 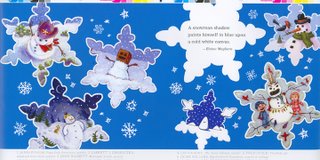 This is the haiku poem I wrote for "my spread" in ROBERT'S SNOWFLAKES:

A snowman shadow
paints himself in blue upon
a cold white canvas.

I love the idea of doing archived posts. Brilliant!

Love these books, Elaine, except the Zolotow one, which I don't know. Swing Around the Sun is one of my all-time favorites. Thanks for popping it into my morning:>)