Children's books in the Olympics

As some of you know, I've been on a small Scottish island for the last four months 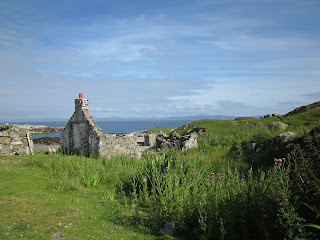 and for the last four weeks, staying with a family. Last night we had a party to watch the Olympics Opening Ceremony. I think the UK has to be the only country in the world that would read a passage from a children's book (the part in PETER PAN describing the island, as you imagine it just before you fall asleep) during the opening ceremony....and have it read by another children's book author (JK), and include it and other books in the dancing.

What the people I was with enjoyed most about the ceremony, though, were all the funny bits: the Brits do like to laugh, and laugh at themselves! Even the Queen became part of the humor, though Mr.Bean in a spoof of Chariots of Fire was funny, too.

No one mentioned (and I'm not sure if anyone there but me even knew) that the connection between the National Health Service and Peter Pan is that J.M. Barrie gave all the profits, during his lifetime and for as long as the copyright lasted, to the Children's Hospital -- and bought 20 tickets for the opening night and gave them to orphans.

For many years, Peter Pan was my favorite  book and I was glad to see it featured so prominently last night, and inspired by what I remembered of J.M. Barrie, too. His giving tickets to orphans was not totally altruistic: he was known then for his adult plays and was afraid this would bomb with them -- though pretty sure kids would like it.
Posted by Libby Koponen at 6:23 AM

Ah.. you're in Scotland, an isle very much like the one I'm from, Ireland :)

Just wanted to say I never knew about J.M.Barrie donating his royalties to the children's hospital - now that has impressed me.

And as to children's writers and characters appearing in the Olympics opening ceremony - it's a real testament to the fact that the characters in the books have become as real in the public mind as any other British tradition... wonderful...

Siobhan, thank you -- I didn't think of that, but you're right: it DOES show how real the characters are to the people here.

Thanks for commenting -- and lucky you to live in Ireland.