Read Q&A about my new book Daredevil on authorof.blogspot.com

Here's one of the questions and answers:

Question: You've written about bubble gum, a legendary racehorse, a life-saving dog, among many other topics. What inspired you to choose the life of little-known aviation pioneer Betty Skelton?Meghan McCarthy: I actually struggled with this topic at first because Betty seemed to have an awe-inspiring life. When I write a biography, I like to include a little struggle—something to give the story a nice arch. But Betty was such a positive person that I couldn’t find any struggle! She put a positive spin on everything! I know it seems odd that I, a writer for children, would be looking for some sad drama, but I kind of was. I couldn’t find any. Even when Betty wasn’t chosen to go to space, she was okay with it. She seemed to enjoy the experience and said she loved working with the astronauts. She’d followed the career of John Glenn her whole life and wrote him letters but said he never wrote back. She just laughed about it. She was such a good-natured lady.Why is Betty Skelton the person to write about? Because she didn’t care if girls weren’t supposed to fly planes or race cars or jump boats or be advertising executives. She just did what she wanted to do. As a kid I was like that. I played on an all boys baseball team. I distinctly remember running home and telling my dad that I needed a glove and socks and a “cup.” My dad sheepishly explained why I didn’t need one of those! Betty did things bigger and better than I ever could and that’s what I think is so awesome.
Posted by Meghan McCarthy at 1:10 PM No comments:

I'm having an online for Ling and Ting Share a Birthday on my blog! All day long, I'll be posting fun things to celebrate the book! So far, there's a podcast interview with Katie Davis' Brain Burps about Books (and an opportunity to win a free book!),  a downloadable party kit and I just posted a fun little game which feature some of the books by the Blue Rose Girls! There's more to come, so please check all day and have a good time!!
Posted by Grace Lin at 12:03 PM No comments:

I am so proud to be part of We Art Boston, a fundraiser for the Emergency and Trauma Fund at Boston Children’s Hospital. Original illustratons from over 40 children's book artists (including Grace!) will be auctioned off beginning October 10th.

On the 20th there will be a fabulous celebration on the Rose Kennedy Greenway in Boston, with art activities for kids, a stuffed animal portrait station, book signings, and book making station, among other things. Come by and say hello! I will either be signing books, manning the book making station, or sneaking my daughter's stuffed lamb over to get her portrait drawn...

Here is the piece I donated, from Abigail Spells: 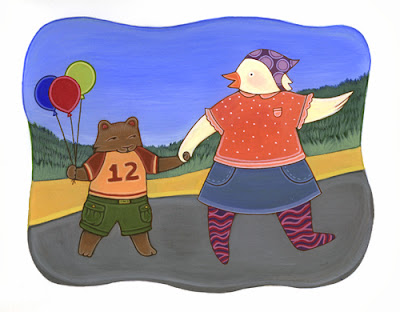 Yes, the book is now out!  In celebration, here is the book trailer!!!


Hope to see some of you at the birthday party on Saturday!

(there will be a belated online birthday party later on, stay tuned...)
Posted by Grace Lin at 9:48 AM 1 comment:

One of the nice things about living on this island is that there is no ageism (you have to be over a certain age, I think, to know how prevalent this is in America). When someone turned 18, I was one of the people she invited to the pub on the night of her birthday.  Having your first drink there is a big deal, and I was honored to be included.

It was also a really fun night. Some of us were talking about the Lord of the Rings, and when the conversation turned to Harry Potter, I asked someone who had grown up with the books -- he is 19 -- why he thought they were so popular. I've asked lots of children why they loved them so much, but no one has ever articulated an answer.

He said he liked the mixture of the realistic writing and Hogwarts:

"Because when you turn eleven you think you might get the letter," he said, with a delighted, wondering smile (at the memory, I think, not the question.)

If that sounds unbelievable, or too fanciful, or not something American children would think, I remember once -- in the early days of the Internet -- getting an email from a child saying mine was the only author's email addresss she could find (it was at the back of BOTM) and did I know how she could write to Hogwarts?

"It is my hope that it exists," she wrote.

I think the line between what's possible and what isn't is blurrier when you're young; you can know something is not true and yet hope, almost believe, that it IS true.