Learning more from the bad than the good?

I am housesitting for Grace, and one of the many fun things about being here is reading the books! She owns complete sets of many of my favorite series -- and when I was reaching for a book I hadn't read in awhile (I own every book in that series EXCEPT the one I was reaching for, which belonged to my brother), I saw that someone else had written an addition to it --  NOT within the last ten years, earlier.

So I read that. There are some continuations, prequels, additions that are better than the originals. This one was well-written -- but curiously flat and dead. Even when big things happened, I didn't feel anything about them, I didn't feel what the characters felt. But I couldn't put my finger on why. The only obvious things the newauthor did differently than the original author had were:


When I finished it, I immediately started the book from the original series. What a difference! Each description was part of an incident and directly related to the child experiencing it. The POV child reacted emotionally to them all -- even when his feelings weren't told (sometimes they were, sometimes they weren't), you knew what they were: because of the selective use of detail.

And maybe this is the biggest difference of all: every incident was INTERESTING. The original author didn't just tell about the times they were walking to  -- oh dear, I can't be specific you might guess the book and it is no mission of this blog to trash other writers (it's hard enough being an author!). He described one specific morning, from the point of view of one child -- and a small detail/action that conveyed him. When then when they got there, you really wanted to know what was going to happen because there was an ongoing drama, tension, story....one that was concluded in a satisfactory manner a few chapters later.

Earlier that afternoon, BRG friend Alissa (another really fun thing about being here is all the good talks with people about writing children's books -- our own and other people's) had described reading a novel that wasn't very good. She said you learn more about writing from the bad than the good. I agree!

Rarely is it possible to compare two authors who are using the same material, and if anyone wants to name titles from authors who are dead and whose feelings can't be hurt, please tell us who you found or thought of.

I can't think of any children's book authors, only Scott and Zelda Fitzgerald -- you can also see his edits to her novel in some collections. But children's books, that's harder.
Posted by Libby Koponen at 8:50 AM No comments:

I've posted about the Gallery Project before--this was the brainchild of Art Director Kirk Benshoff, and he brought it to Hachette Brook Group three years ago. Two weeks ago, the third annual Gallery Project in the NY office was held. Publishers Weekly reported on the event here:


Editors, designers, and publicists spend their days refining and supporting a writer’s art—his or her book. But, in an effort to once again put its employees’ own talents on display, the third annual Hachette Book Group Gallery Project was held by the publisher last week in HBG’s New York office.

The art on display ranged from photography, to painting, to book sculptures, and more. I didn't take a lot of pictures, but a few of the creations were children's book related, like this felt recreation of Ethan Long's Chamelia (posing with the book's editor, Connie Hsu).

Of course, I was obsessed with this Lego sculpture of Mr. Tiger, from Peter Brown's Mr. Tiger Goes  Wild. Jonathan Lopes is a true Lego artist. Check out his Facebook page for BKNY Bricks here! 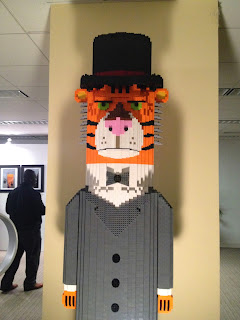 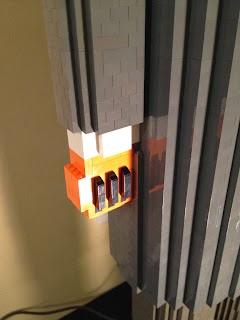 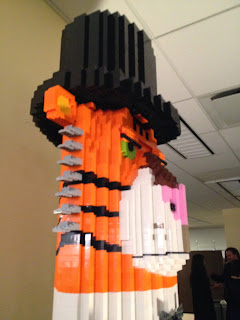