Children of all ages did march -- even some teenagers. 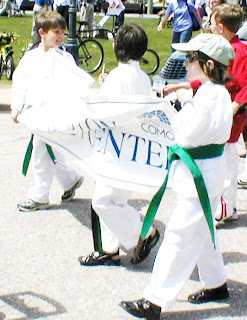 I had thought afterwards everyone was going to grab a ribbon and dance around the Maypole, but I was wrong. One group of dancers had been allowed to use it before the parade - and when we got there, it was all tightly wrapped up.

I asked the woman in charge if the children could dance around the Maypole, or at least play with the ribbons, and she said:
"No, it took hours to wrap up."

Some enterprising children untied some before they were stopped -- but no one danced. 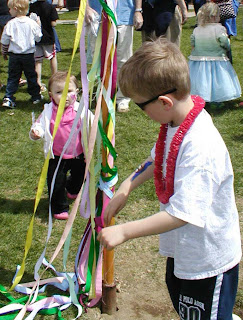 This seems to me SO typical of the way things are often arranged at public celebrations in this country. Mystic is usually pretty good at these things, but today, instead of getting to dance themselves, the kids were supposed to watch other people do it. What fun is THAT? 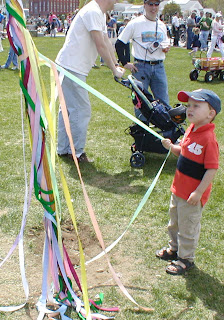 Maybe that's why they seemed to be getting such a kick out of marching or riding their bikes. 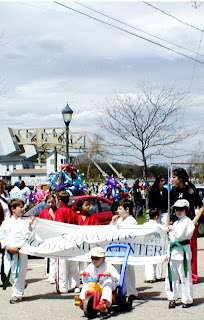 This post doesn't really have a point, except that maybe it was really predictable that the May pole scene I was imagining in such vivid detail didn't ever take place. This is the really down side of an imagination: hearing something, instantly picturing it in an ideal way, and then being disappointed when reality doesn't live up to it. This is so common that I probably wouldn't even have noticed it if I hadn't written that earlier post about the great May Day Celebration in Mystic. I did consider deleting it but that seemed like cheating. So -- a slice of reality instead of a magical mystic mayday.
Posted by Libby Koponen at 3:26 PM

Hmm. Just goes to show that adults can be really lame.

Thanks--yes,actually I guess the lameness was a main point. And the parade WAS really fun. The children were adorable and so into it....my pictures didn't really capture it because I had forgotten when I put the new batteries in my camera that the setting reverted to automatic rather than HQ for everthing. If you could have seen the INTENSE look on the face of that tricycler!!! (the little boy at the head of the karate kids) He was pedaling with everything he had: maybe just the way he's bent over those handlebars suggests that.