I didn't have any official BEA responsibilities this year, but I did attend the children's "breakfast" on Friday morning (at the much-too-early hour of 8 am), and walked the show in the afternoon before the Kidlit Drinks gathering at 5 pm.

I put "breakfast" in quotations because it consisted of a basket of bagels and muffins, both quite small in size. But the coffee and juice was plentiful, and besides, it wasn't the food we were there for. Libba Bray was a very funny and perky as the emcee, and the speakers Mo Willems, Jacqueline Wilson, and Daniel Pinkwater all eloquent and interesting. And it was surreal hearing a voice I've only heard on NPR come out of a flesh and blood man in the latter.

I met up in the afternoon with my friend Donna Freitas--we got signed copies of Wicked Lovely by Melissa Marr (gorgeous cover), and No Talking by Andrew Clements. As Andrew Clements signed the book to me, he told me that the only other person he knew with my name was an old drama teacher he knew, who taught students such as Charleton Heston. Except that she pronounced her name "Al-vine-a"--of course. Curious, I've since looked her up online--Alvina Krause, sometimes nicknamed "Maker of Stars."

Then we ran into Jarrett Krososzka and his agent Rebecca Sherman at the Little, Brown booth and we walked the floor together a bit before Jarrett had to leave at 4. We saw the Lissy dolls on display at the MerryMakers booth: 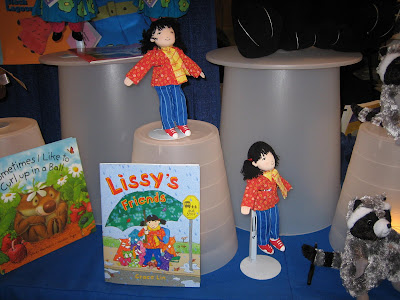 And then Jarrett and I took a silly pic at the Penguin booth: 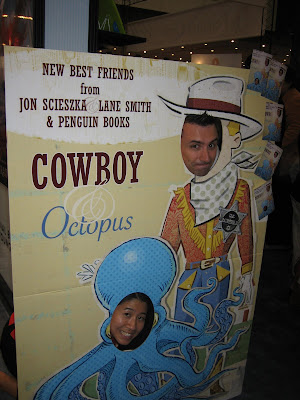 Then Donna and I were off to the Kidlit Drinks night at Landmark Tavern. I was exhausted from a busy day and week by then (and I must admit a bit tipsy from free champagne and wine at various BEA booths), so please excuse me if we talked and I seemed a bit out of it. But there was a great turnout and as usual at these gatherings, it was great meeting some new friends and seeing familiar faces.

Next up is ALA in DC at the end of the month. Hope to see you there!
Posted by alvinaling at 9:07 PM

Email ThisBlogThis!Share to TwitterShare to FacebookShare to Pinterest
Labels: alvina