Pride and Prejudice and Jane Eyre are still in the children's section of most bookstores I've visited lately...Who would you rather be, Elizabeth Bennet 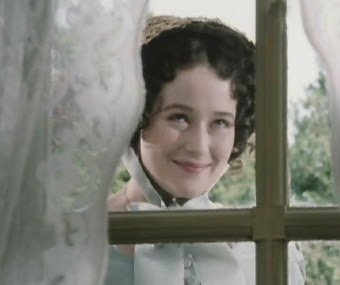 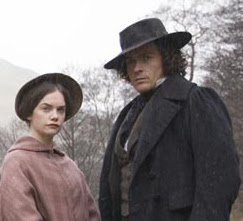 For me the answer would have been a complete no-brainer if I hadn't seen the new (and to me, definitive, far better than the book) Jane Eyre on TV. But that started a whole new train of thought about this character and how really revolutionary she was, in her passion and insistence on her own equality. I even went back and reread big chunks of the book....and in the introduction it said that when Jane Eyre was first published, one reviewer suggested that it not be left lying around where young girls could find and read it.

So now I'm not sure (especially since Jane gets Mr.Rochester as played by Toby Stevens). I think she'd also probably be quite a bit better at supporting herself than Elizabeth, too. But I know which character I would rather have created: Lizzie. What about you? And why do you think these books are in the children's section?
Posted by Libby Koponen at 8:46 AM

I would rather have created Jane,since to my mind, she was one of the first true women's lib types -- way ahead of her time, and giving voice to all the "repressed females" in history.I'm also partial to the Brontes, having visited Haworth and becoming fascinated with the miniature books they wrote as children. Jane's emotional struggles are so elemental/of the human heart, especially since we witness her harsh childhood. Not taking anything away from the brilliance of Lizzie's portrayal (and I do love Austen)--it takes a more "urbane" reader to fully appreciate all the satire and social comment that Austen dishes up, whereas Jane's plight seems more accessible somehow: human beings thrive on love. I would think today's young reader would find it easier to identify with Jane than with Lizzie.

I like both, but my heart has been with Jane since high school. I'm so emotionally attached to her and Mr Rochester as if they were real people that I can't even begin to critically analyze it. I guess I liked that she was an outcast, and plain, and poor, and powerless, but she spoke her mind anyway. She was brave in a way I really wanted to be.

This is so interesting! MY heart was always with Lizzie -- I admired her so much and wanted to be like her. I even tried to be! But seeing that movie of Jane Eyre and re-reading the book (I admit I skipped chunks of it - those long Victorian descriptions) made me admire Jane more. She would be a better role model, I think -- for the reasons you say. She VALUES herself in a remarkable way: but I only now get how remarkable it is for someone with so little love and support TO value herself. I guess I was so confident as a kid that I took that for granted & was more drawn to charm....but NOW, I value that Jane Eyre courage.

And when she makes that speech to Mr. Rochester about being little and poor but having as much soul as he does, wow! Bravo, Jane!

But I still would rather have written Pride and Prejudice.

ANyway, it's cool that characters in great books grow in the reader's mind.

PS I agree that most of today's young readers would identify more with Jane...*I* identified more with Lizzie -- and I thought Pride and Prejudice was hilarious, even as a child who didn't get most of it. Mrs. Bennet made me laugh a lot.

Maybe young readers who like to laugh would prefer Pride and Prejudicem as I did. Those who like to identify with a heroine would prefer Jane -- for all the reasons Margaret and Linda put so well.

It's not in the children's department in our library. It's in the high school section/ Ya/ which is shelved in the Adult department. I can't think of any 8 - 10 year old who would trudge through it. But romantic teens, sure.

Dear Libby, what a great question. I posted a much longer response on my blog, but here's the Cliff Notes version: I agree both books are technically YA. Even though I personally feel more like Jane Eyre, Dear Reader, I honestly I would much rather have the sparkling wit and rapid-fire words of Lizzie Bennett. I would much rather laugh than cry. I also prefer her loving, if slightly crazy, large family. Oh, to have had the talent required to create characters as brilliant as Miss Elizabeth Bennett and Mr. Darcy!

I love this comment and your post -- especially your description of your 10-year old self's summation of Mr. Darcy and Mr.Rochester: GREAT! Thank you.

Hee. Thanks for directing me over to Emily's post! I just posted a big ol' reply. :D :D