A couple of weeks ago I posted a poem by Marge Piercy entitled Colors Passing through Us. Eisha also posted the poem at 7-Imp the same day in Poetry Friday: Marriage, as seen by me (and Marge Piercy). Last Saturday, I got together with a friend who is a teacher and poet. We met at a local Border’s in the café to critique each other’s poems. Later, we checked out the poetry section in the store. I purchased a copy of Piercy’s book Colors Passing through Us. It’s got some great poems! Here’s one of the best poems that I’ve read so far in the book. I like the touches of humor in One reason I like Opera. I’m often surprised when an adult poem makes me chuckle to myself. I hope you all enjoy this Piercy poem as much as I do. 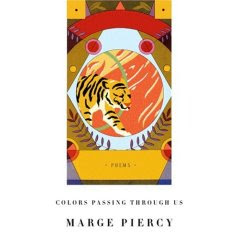 In movies, you can tell the heroine
because she is blonder and thinner
than her sidekick. The villainess
is darkest. If a woman is fat,
she is a joke and will probably die.

In movies, the blondest are the best
and in bleaching lies not only purity
but victory. If two people are both
extra pretty, they will end up
in the final clinch.

Only the flawless in face and body
win. That is why I treat
movies as less interesting
than comic books. The camera
is stupid. It sucks surfaces.

Let's go to the opera instead.
The heroine is fifty and weighs
as much as a '65 Chevy with fins.
She could crack your jaw in her fist.
She can hit high C lying down.

The tenor the women scream for
wolfs down an eight course meal daily.
He resembles a bull on hind legs.
His thighs are the size of beer kegs.
His chest is a redwood with hair.

You can read the rest of the poem here at The Writers’ Almanac with Garrison Keillor.

At Wild Rose Reader today I have an Anti-war Protest Song and Poetry post with three poems and a YouTube video of the Jackson Browne song Lives in the Balance.

The Poetry Friday Roundup is at Literary Safari this week. 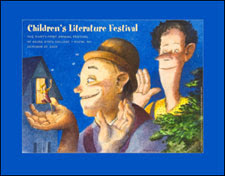 I'm off to New Hampshire this afternoon with Grace an Anna for the Keene State College Children's Literature Festival.

Posted by Elaine Magliaro at 1:45 AM

I enjoyed One Reason I like Opera so much.

Seems like many reason to like opera - not the least of which is that villainous baritone and now I must go.

Oooh, yeah! I took this one and immediately copied it into my personal favorites. Thank you MUCH!

This makes me so sad that I've never seen opera except on TV (or in the movies when the characters go.) I must remedy this.

Ooh, and the rest of the poem is so sexy and good. Thank you!

What a great poem!

I don't like opera, but I love this poem. I just put the book on reserve at the library.

I love attending the Elaine Magliaro School of Poetry. It's my favorite.

Thanks to all of you for commenting. I really like this poem! I, myself, have never been to an opera--but we've watched/listened to some operas on PBS.

I love opera and am fortunate to have married a man who sings opera, and hires opera singers who end up being around our house all the time, so I get home-delivered opera on a regular basis. I love this poem! I think they will too. Thanks Elaine!