It's almost 2010! Unfortunately, unlike last year, 10 is not a particularly lucky number in Chinese culture. However, it is not unlucky either (tremble for the year 2014!) so perhaps it's a good time to look over the last year and make realistic, attainable goals for the upcoming.

Hmm, so how did I do in 2009? Not too bad. I learned how to make a frosting flower and donated my hair. I even made dumplings, though not as many as I wanted to (I didn't do the Lin family recipe as planned). I tried to write my novel to the very best of my ability as well the promotion of it. Of course, in hindsight, I can always see where I could've done better, could've done more but I guess that is what 2010 is for!

So with that, I'll try to look forward. Here are my ten, hopefully attainable, goals for 2010:

1. Preserves. And I mean jam and marmalade! I want to learn how to make jam. Really! It is something I have always wanted to do since reading Anne of Green Gables. And you know how much I love that.

2. Be the change I want to see. This, of course, could be very lofty but since I want to keep things attainable, I've decided that to focus on smaller scale ideals. A while back, fellow blogging author Kimberly Baker asked the blogosphere "Where's the MG?" bemoaning the fact that while YA books generate a lot of online "buzz," younger novels are, on the whole, overlooked. After embracing promotion for the last year (see #8), I'm inclined to agree with her. So, I've decided that this next year I'm going to start featuring MG books that I like. They won't be reviews because there won't be any scientific rhyme or reason to it except that I like the book (and I have particular taste which is probably best described as old-fashioned). And, I think I will talk about old classics as well as new favorites. So look forward to Book Talk Tuesdays 2010!

3. Board Books. I love writing novels, illustrating picturebooks and in 2010 I'll be publishing an early reader too. I think the greatest moment in my career so far has been when a mother told me, "My kids grew up with your books." It was such a neat feeling, that by writing different genres, my books were keeping up with the kids' reading levels & interests. In 2010, my main focus will be on the genres I have already established (most particularly a new novel, hopefully) but I want to start thinking of new ideas for the other ages. How neat it would be for a baby to start with a board book by me and then slowly move up to the other books as he/she grows? What a lovely dream!

4. Progress. These past couple of years I've tried really hard to create the best book I could. And for my abilities at that time, I think I did okay. But as I said earlier, now looking back, I can always see where I could've done better. I want to take everything I've learned and create something even better.

5. Schedule. And to achieve #4, I want to create a better writing schedule for myself. I tend to write in the "binge & purge" method, which is not very practical. In 2010, I'm going to try to write everyday, even if it is only a paragraph.

6. Fondant. I learned the frosting flower, now I'd like to learn how to make beautiful fondant ones...like this: 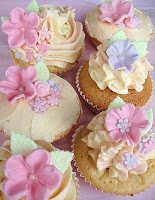 7. Relax. As some of you may have suspected, I'm in a really happy relationship (with a Squatchie) but I've been very reluctant to mention it acquaintances and even friends. I guess I have been shy about people knowing about it because I'm scared of judgements, like it being "too soon" after Robert. But this year it will be three years since his death; and since I know Robert would be okay and happy about the new direction of my life, I'm going to start believing everyone else will be too.

8. Appreciate my readers. Not that I don't appreciate them now (THANK YOU!) but this past year has been a whirlwind of promotion for me, from the thrill of the Parents' Choice Award to the excitement of the Today Show. It's hard not to get caught up with ambitions, hopes and dreams of bigger and better prizes. But the truth is while accolades are flattering and promotion is necessary for a book's survival, I think true greatness is found elsewhere.

9. Balance Better I do quite a few school visits to pay the bills (little known truth--most mid-list authors such as myself support themselves through school visits, not books!), and while I truly do enjoy them--they also wipe me out. There is also usually a lot of traveling involved as well. It's really hard for me, someone whose natural state is introverted, to do large amounts of visits, be creative, and try to be healthy as well as be a normal person (I've regressed into a blob more times than I like to admit in 2009). In 2010, I want to balance all of it (especially the being healthy part) better.

10. Charity. Just like last year, I feel strongly about continuing the spirit of charity. While I am finished with the small graces project and am happy to pass the reins to other artists, I still want to contribute to the world in my own small way. How? Not exactly sure yet, but will let you know!

Those are great goals - and knowing you, you will achieve them. Happy New Year, Grace!

Good luck in all you do--and Kaylee is really enjoying Anne of Green Gables!

Wow--these are really inspiring. I've got to get to work on my resolutions!

Thank you for sharing your 2009 accomplishments and your goals for 2010 - you've inspired me to think about mine. I love how you've looked to the different aspects of your life that give you joy.

I hope you succeed with all of them!