before, during, and after

So, Thursday night, the night before my Today Show appearance, I slept very badly. I had a bad dream that I was on my way to the TV studio when I tripped and fell into a muddy pond...and then had to go on air with half covered in mud. Also, Mo Willems was the guest before me (because really, it's every author's nightmare to have to speak after him). So, my anxiety dreams were not that subtle.

But, luckily, it was just a dream and before I knew it, I was there, it was live, and it was OVER! It went by so quickly! 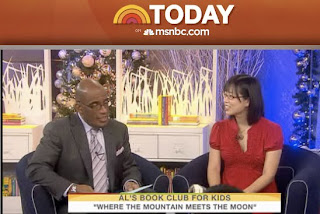 According to the youtube clip, it was exactly 4 minutes and 58 seconds. I spent a good portion of that time thinking that I had to stop my legs from jiggling. But there were a few moments when my mind was calm, and during that time I was rather awed.

The truth is, I think I have always put limitations on the appeal of my books. I've always thought my books were "Asian-niched" or "for girls" but for the first time, I realized how close-minded I've been about the audience that I write for. As we waited on set, the kids' excitement and enjoyment of my book was honest and real. "This book should be made into a movie," one boy said. "This book and that other blue cover book were the best ones we've read!" another said, the others echoing their approval. And then live, during the show, when one boy HAD to say, "By the way, I liked your book," before asking his question something clicked. 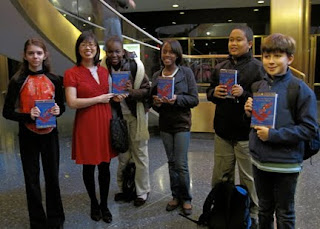 None of these kids were obviously Asian (I think one might have been a mix) and the boys were just as, if not more, enthusiastic than the girls. They did not think of my book as a Chinese book or a girl book. Those things didn't matter or even occur to them. This was just a book they enjoyed. It was perhaps the most truly multicultural moment I have ever had in my writing path so far-- a moment where the race and gender melted away, a moment that was so multicultural that the label faded away.

Which was very, very neat.

Afterwards, it still took me some time to come down (I am still recuperating!). Strange how something that occupied so much of my mind for so long was just, well, finished. It was almost anti-climatic, but a celebration of: 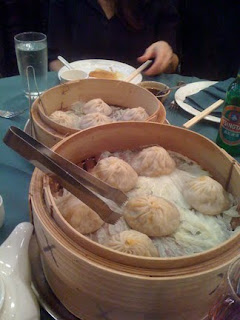 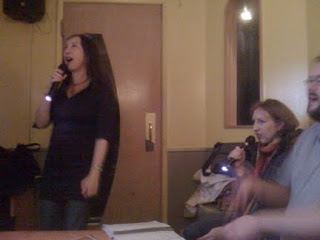 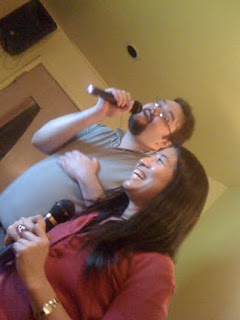 singing bad karaoke tempered the withdrawal! Well, ok, only my singing was bad (my song="Flashdance:What a Feeling"). The others (Melanie, Meghan, TS and Alvina) were pretty good.
Posted by Grace Lin at 5:00 AM

Thanks for the recap - the interview was great, and it's wonderful to see how expansive your audience is.

So thrilled for you, Grace. :)

Congratulations on such a wonderful and well-deserved experience.

I have read the review of you books that are really valuable.Your books for children are interesting and enjoyable.