Happy Fall, all! We've had relatively gorgeous Fall weather in NY, aside from one wintry day, and some gloomy rain. This past weeekend looked like this:
There are always book-related events going on in NYC, but lately there seem to have been more than usual. Last weekend was New York ComicCon. I hadn't been in about three years, and I was shocked at how big and crowded it's become--much closer to what San Diego Comic Con is like, I was told. I was speaking on a panel, so I got a pass that looked like this:
I spoke on the Kids/YA Publishers Spotlight panel--basically, ten different publishers buzzed about recent and upcoming Middle Grade and Young Adult books. This was the room my panel was in--it was a packed house! And the best part was that it was filled with fans of books. In fact, the audience would clap enthusiastically when the slide showed a book or author they were excited about, and not just the "big" books. That was pretty cool. 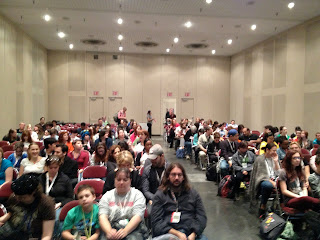 Here was the Little, Brown Books for Young Readers booth: 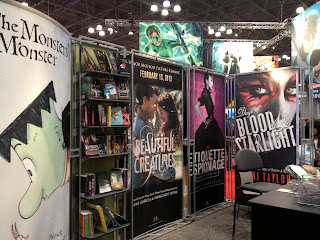 I had wanted to walk around a bit after my panel, but it was so crowded and overwhelming I couldn't take it. One of the best things about Comic Con, though, is that the majority of the attendees went all out in terms of their costumes. I didn't take any pictures, but there are plenty online, including here, here, and here. So many little kids were dressed up, too.

Speaking of costumes, yesterday I went to the Symphony Space for a costume party/Book Release Special Event for The Diviners. It featured a conversation (aka hilarious banter) between authors Maureen Johnson and Libba Bray, a reading from the book by actress Ella Rae Peck (Gossip Girl), and a performance by Dandy Wellington and his Band. Everyone was decked out in their 20s garb (Maureen wore satin pajamas, a la the character Theta in the book), and a grand old time was had. Maureen and Libba talked about their mutual love of serial killers, how the house in The Diviners was inspired by the house built by H.H. Holmes (of The Devil in the White City fame), and how The Diviners was inspired by Libba wanting to write about post-9/11 America--she found many similarities and parallels with 1920s America. Oh, and we also determined that there is no such thing as a sherpa farm (Libba had meant to say "llama farm").
Here's a little snippet of the musical performance:
Libba is doing another booksigning this Thursday at Books of Wonder--it's a Teen Fantasy event with six other YA authors from 6-8 pm. Come on out! I'll be there.

Wednesday night I'll be back at Symphony Space for an event with Lemony Snicket--his new book, Who Could That Be at This Hour? comes out tomorrow--it's a new four-book series, a prequel to The Series of Unfortunate Events. Lemony Snicket (aka Daniel Handler) will be sitting down with author Sarah Vowell of This American Life fame.

If you're in the NY area, I hope to see you at one or both of these events!

Speaking of Daniel Handler, check out this hilarious interview:
He is a funny, funny man.

I must say, going to all of these events reminded me that I really like going to readings and other book events. I really should try to go to more that aren't books I've worked on. Have any of you gone to any literary events of note recently? Any upcoming ones you'd recommend?
Posted by alvinaling at 8:30 AM

I was just in San Francisco at Books Inc. for a Not Your Mother's Book Club event, my first one, and all three Maggie Stiefvater, David Levithan, and Ellen Hopkins were there! I've already devoured RB and can't wait to start ED! And the event was awesome. Maggie stood on a chair. I covered it on my blog!