In fairness to the younger generation 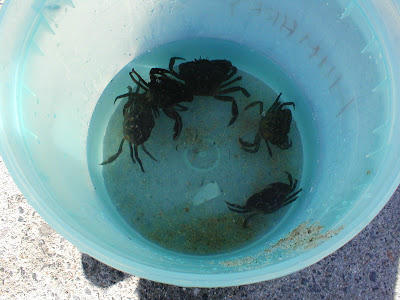 Yesterday I went to another children's birthday party, and this time, no one cried or screamed or fought....even though a lot of the same kids were guests. The invited guests included girls -- I say "invited" because most of the kids who were at the parents' Club that day joined in the party. The only organized activity was watching the magician 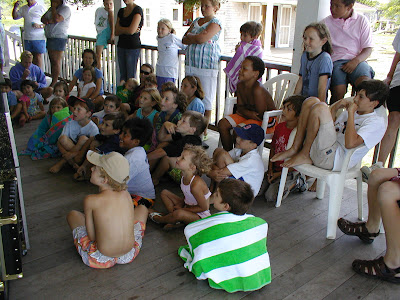 (If you remember the last birthday post, and the boy who spent most of the party alone playing with the dog and calling: "Here, Henry! Come to Uncle Issac!" he's the one with red hair and a puzzled expression in the front row - you can see better if you click the picture.)

For most of the party, the kids just ran around, swam, or played. When I arrived, about ten were crabbing -- very absorbing. One boy and I 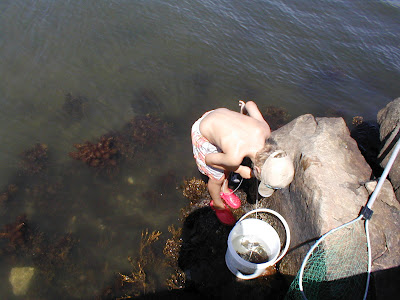 spent most of the party doing it, missing the pinyata, cake, and present-opening.

He taught me how to do it. Squid, he said, is the best bait: 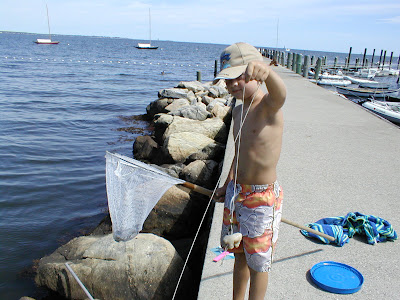 You put it on a weighted line, drop that into the water, and when the crabs bite -- which the little rock crabs we were catching do in less than a minute -- the other person nets them. You empty them into a waiting bucket by turning the net inside out --though when all the children were doing it together, someone did shout:
"Don't be a baby, just pick it up!"

(You can pick them up without getting bitten if you hold the sides, or the back.)

Calvin said that the little rock crabs are easy to catch; the big blue ones are harder, but he told me where to find them and more about local wildlife than I've learned since I moved here.

When people ask me why I write for children instead of adults, I sometimes have a hard time coming up with an answer; but I think one reason is their passionate interest in the world around them. It's reassuring that even with Nintendo DS and the like, some kids still feel that.
Posted by Libby Koponen at 8:45 AM

Out of the mouths of babes . . . this is where we often find the greatest wisdom, the great approaches to life. I'm so glad you had to the chance to meet this boy and learn from him.

Fabulous!!! What a terrific time, I'm so glad you went! It reminds me of my mysterious crab girl...

I love these photos--and the blog. Thanks for sharing. Hope you can come visit mine, also. I, too, enjoy the sea.

Squid, he said, is the best bait.

I love these descriptions. Thanks for sharing!

When I hang out with children, I feel like I want to absorb every word, thought, and lesson--the way they constantly teach . . .

Me too! Thanks! I know not all adults feel this way and I'm sure there are plenty of people who find these real children posts pointless and boring -- so extra thanks everyone for the comments.