Beyond the Book: Freaks and Revelations by Davida Wills Hurwin 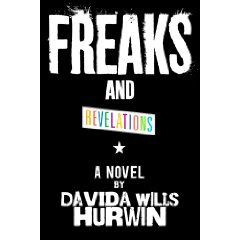 Beyond the Book: Freaks and Revelations by Davida Wills Hurwin

What if a stranger hated you?

This raw, moving novel follows two teenagers—one a Mohawk-wearing, Punk-rocking seventeen-year-old Neo-Nazi; the other a gay thirteen-year-old cast out by his family, hustling on the streets and trying to survive. Told in alternating perspectives, this book tells the story of the boys’ lives before and after the violent hate crime that changes both their futures. This is a tragic but ultimately inspirational journey of two very polarized teens, their violent first meeting, and then their peaceful reunion years later. It is an unforgettable story of survival and forgiveness.

Acclaimed author Davida Wills Hurwin weaves a compelling and powerful story, inspired by the real lives of Timothy Zaal and Matthew Boger. Theirs is a journey from fear and hate to tolerance and hope. And it is proof that people can truly change.

This book has had an interesting genesis—it started when a film agent approached a literary agent asking her if she knew anyone who could write the story of two men, Matthew Zaal and Timothy Boger, in book form. The literary agent really saw this as powerful material for a young adult novel, and approached her client Davida Wills Hurwin about taking it on.

When I met with with the agent over two years ago, I was initially interested because of Davida’s involvement—her first novel, A Time for Dancing, had been published by Little, Brown and was the first YA book I read after starting work there. It was handed to me by another assistant (Amy!) who told me that although Little, Brown did not publish much young adult fiction, A Time for Dancing was a perfect example of the type of YA we did publish. I absolutely loved it—I thought her writing was beautiful, and that she perfectly captured the raw emotion of the story. And, of course, it made me cry. And then, when the agent went on to tell me the incredible story of these two men (whose story has been shared on NPR, the Oprah Winfrey Show, and more) I thought, this is exactly the kind of book I love to read. Edgy but authentic, and ultimately uplifting and inspirational. In fact, after the meeting my assistant Connie kept saying, "Are you excited? This is your kind of book!"

The book was in the process of being written when the agent pitched it, and so it wasn't until over six months later that I finally was able to read it. And it delivers. Davida has done a brilliant, sensitive job of bringing their story to life. She interviewed both men at length, going back to meet with Tim again and again after realizing that his story was more challenging to tell. It’s such a powerful story even as fiction, and the fact that it’s based on truth takes it to that next level. She also wrote a very thoughtful author's note at the end of the book explaining her process, and we also include a brief Q&A with Tim and Matthew. I've had the opportunity to meet Davida twice so far, and she is such a warm, loving soul. It has been such a pleasure working with her.

The book's official publication date was yesterday. Happy book birthday! As always, I love the design of this book, this time by the amazing Ben Mautner who told me that he couldn't stop thinking about the book after he read it. He put so much thought and care into the design. Here's the cover... 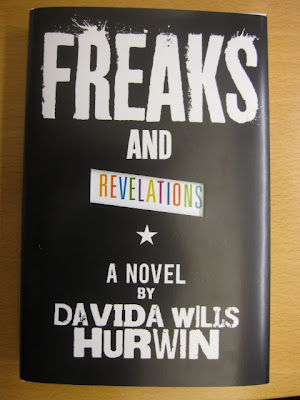 If you take off the jacket, a stark white case cover is revealed with just the word "Revelations" that shows through a die-cut in the front of the jacket: 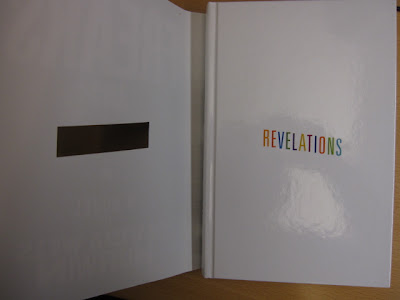 And here is the full jacket: 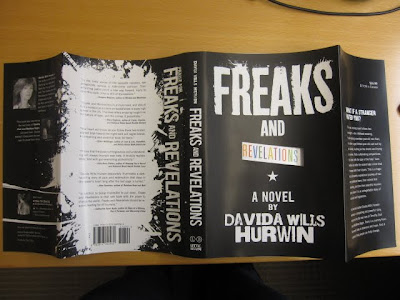 On the back cover, we had some wonderful advanced praise--I was so pleased to discover how strongly others responded to the book:

"In the lively voices of the separate narrators, two antagonists survive a hate-crime collision. Their entwining paths point a new way forward. Hurry to read this book; time is still of the essence."
-Gregory Maguire, author of Wicked and Matchless

"In addition to being impossible to put down, Freaks and Revelations is that rare book with the power to change the world. Lots of books shine a light on the humanity of the oppressed victim. This book grants humanity to everyone. Freaks and Revelations should be required reading for all humans. We need what it provides, and we'll be better for it."
-Catherine Ryan Hyde, author of Diary of a Witness, Pay it Forward, and Becoming Chloe

"Your heart will break as you follow these two scared, scarred boys toward the night both will regret forever. A compelling and essential book for teens."
-Ellen Wittlinger, author of Love & Lies, Parrotfish, and Printz Honor Book Hard Love

“Freaks and Revelations proves that the power of forgiveness and understanding will always triumph over hate. A brutally realistic story, told with gut-wrenching authenticity.”
--Julie Anne Peters, author of Keeping You a Secret and National Book Award finalist Luna

In Freaks and Revelations, Davida Wills Hurwin exquisitely illuminates a dark, haunting story of pain and redemption so that it stays in the reader's heart long after the last page is turned.
--Alex Sanchez, author of Rainbow Boys and Bait

“Freaks and Revelations is a must-read, and should find a conspicuous place on bookshelves in every high school in the US. The book offers amazing insight into the nature of hate, and the crimes it perpetrates. Davida Wills Hurwin should be very proud!”
--Ellen Hopkins, author of Crank, Impulse and National Book Award finalist Burned

“Freaks and Revelations is a painfully-honest journey through the collision-course lives of two adolescents…one a homeless gay kid hustling the streets of West Hollywood the other an increasingly violent white supremacist desperate to find himself in LA’s punk rock scene. Through misfortune and serendipity both boys learn the meaning of pain and forgiveness.”
--J. Dallas Dishman, Ph.D., hate crimes researcher and author of “Anti-Gay Violence in the City of West Hollywood”

We also received the strongest response from our teen Hip Scouts that I've ever experienced. Here's just a taste of a few of the reviews:

"Freaks and Revelations by Davida Wilis Hurwin was a rare novel that showed the truth behind human nature. Hurwin captures people in their most vulnerable state, being faced with something completely different from your own views, and self discovery....Overall this novel is a beacon of hope and a step closer to coexistence and acceptance of any lifestyle. This doesn't rank as a 'must read.' It is ranked as an 'absolutely need to read!'"
-Jeff, 17


"Through Freaks and Revelations, Ms. Hurwin has opened not only my eyes but the eyes of everyone worldwide to hatred and misguidance that could and can be prevented. I am in awe. This story could not be told any better if not by the real people themselves. I couldn't put it down. I loved it; every single word of it. There is hope for a better world, where people understand and respect each other rather than the hate that engulfs us now."
-Michelle, 18


"Freaks and Revelations was one of the best books I have ever read. Profiling the two main characters years before the incident gives readers a chance to get to know the characters and gives them an insight as to why they act the way they do and how they got to that point. It also allows the readers to sympathize with the characters and go through their hardships with them. All of this makes the book more touching and a better read. Each hardship a character went through, I felt as well. It also raises awareness for those who have to suffer in this way. I think that this story is so important to have out there and it was done in a brilliant way which paints a picture impossible to ignore."
-Julia, 15


"Freaks and Revelations is the sort of book that strikes its readers as completely different, new and gripping. The two main characters, Jason and Doug, are from extremely diverse backgrounds, but it's easy to relate to them both in many ways. Their story is a story about the struggle to survive in a world where no one else understands the way you are, the struggle to grow up when you don't know if anyone even cares whether you do, the struggle every teenager faces in deciding if it's okay to be unique. The reality of this tale is powerfully intense, and its message is one that everyone should take to heart. Freaks and Revelations definitely gives its readers a deeper understanding of what it means to hate, to love, and to respect one another. It is truly a masterpiece."
-Melissa, 17


"Freaks and Revelations by Davida Wills Hurwin is a raw and poignant book about two young boys ostracized from their families and left to fend on their own. This novel is told through dual perspectives, and the readers are captivated by the raw emotion each of the characters experience. They cross paths in the most unusual way and in the end, everyone learns about how everyone should be treated with respect. I recommend this book to anyone who is willing to gain a new awareness and want to read an amazing book."
-Tynisha, 16

And finally, a glowing review from School Library Journal:

"Freaks and Revelations is based on a true story so emotionally detailed that it could easily be a memoir....Hurwin gets inside her characters’ pain without sentiment; she present each home and its horrors soberly...The author’s prose is clear and incisive, and many chapters resonate like good short stories. Jason’s narrative stands with Kathleen Jeffrie Johnson’s Target and Laurie Halse Anderson’s Speak as a survivor’s story. Doug’s equally layered story—of coming full circle out of hate—sets it apart." --School Library Journal

I absolutely love this book. It's raw, and there are parts that are certainly tough to read, but above all it is honest, authentic, and as many of the quotes say, I think this should be required reading for all. It is a look into lives most likely very different from your own, it is a book about tolerance, acceptance, empathy, and change. I hope you'll all read it. It is a book that gives me hope.

Email ThisBlogThis!Share to TwitterShare to FacebookShare to Pinterest
Labels: alvina, Beyond the Book, books alvina has edited

That sounds amazing! Thanks for sharing.

Powerful book, and no, I could not put it down. Brilliant how the author alternated between voices, and then brought those voices together at the end, shortened each chapter which seemed to speed up time. My heart was beating fast.