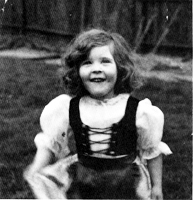 She advises  modeling villians on people we know; there is no need to worry that they will recognize themselves, she says, because few people think of themselves as bad...unfortunately I was unable to do this -- none of the people I wanted to use were quite right for the things they had to do -- but it's a good idea.
Posted by Libby Koponen at 1:17 PM

they can't give away all their secrets!