When Alvina’s entry last week mentioned the tradition of BRG’s to post their New Year’s resolutions, it got me thinking about tradition.

Every New Year’s Day since that day in 1995, I have placed a new, daily Disney calendar on my nightstand and ripped off the cover so January 1st showed. Why my mother decided I needed or wanted a Disney calendar for Hanukkah at 16 years old, I can’t say. I also can’t explain why it became clear that she should buy me another the following year. In 1996, the calendar came with me to overnight camp and that summer while she was becoming my best friend, my co-counselor and I would turn the page together at midnight. Starting that summer, the calendar became a sort of horoscope; it was always easy to start the day with the image of Cinderella’s fairy godmother, but when Queen Maleficent greeted me, I approached the day with trepidation. Through the years the calendars have followed me…to college, to my first apartment, to New York. 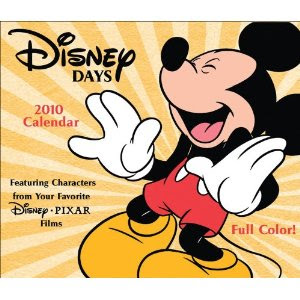 (Please still take me seriously as a professional literary agent)

In December, my mother called and said she had bad news, “Rebecc, I can’t find the Disney calendar. “ Still on the phone, we went online together and confirmed—there is not a 2011 daily Disney calendar. Now I know that so many have faced much greater losses. Still, without a choice, a tradition that I’ve maintained for half my life ended.

When I was at my mother’s house between Christmas and New Year’s she had the local news on TV (for some reason she still doesn’t believe me that the Daily Show provides more news that he local NBC). There was a “man on the street” segment in which people were asked what their New Year’s resolutions were. One woman exclaimed, “If I tell you it won’t come true!” and the newscaster responded, “No! That’s a wish!”

It was a funny moment, but it also made me think. While it’s pretty obvious, I had what my 2010 gift bestower, Oprah, would call “an ah-ha moment.” A wish is hoped for and beyond one’s control. (I realize Alvina and Grace also mentioned this in their 2011 posts, but I needed to realize it for myself and in my own way). A resolution is an achievable goal that can only be reached by the efforts of the list maker herself. So here are my resolutions…*

1. By the end of each business day, respond or have my assistant respond to every email or call from a client, a publisher’s office, or within Writers House.

Now it may seem a given that I would do this, but days are quickly filled with the most urgent matters and on projects that were already on the calendar for the day. At times, the emails I receive between the time I leave the office and enter the next morning could fill my entire day. My goal is not to answer every inquiry posed to me daily, because it would be impossible. I will respond and give a realistic timeline for when their email or call will be addressed or who I need to be in touch with to provide a complete response.

2. To have bi-monthly meetings with my assistant dedicated to discussion of submissions and queries from potential clients.

4. Check in more (whether over lunch, drinks, or just by picking up the phone) with editors and other agents to see what is new, talk about the industry, or to pick their brains about something instead of just calling when there is a particular matter regarding one of my clients that needs to be discussed.

5. Be a better Book Club hostess. I started an industry book club in 2005 that meets monthly at Writers House. I love having to opportunity to read published middle grade and YA books with other adults who read and love these books. However, in 2010, we most definitely did not meet 12 times…and that is admittedly my fault. I will make sure our record is better in 2011.

6. Check in with clients who don’t call or email as often to provide the opportunity for discussion about what has happened since we last spoke and get updates on how their writing or art is going even if I know that they are making progress and are sure to deliver on time.

7. Make sure clients 2011 needs are met. As an agent, especially one who represents so many picture book clients, it’s easy to live two or more years ahead (I have already sold books on schedule for 2014). While keeping a close eye on selling books for the future, I can always do more to attend to the books published this year and the promotion that goes along with those books.

There are a couple more resolutions (8 &9), but I am going to discuss them in greater detail in a post to come.

10. And though it may seem vague, my big resolution is to look carefully at my work- related traditions. There are many that are in place because they serve my clients and me well. I certainly am not going to rid myself of those simply for the sake of change. However, I resolve to challenge my own traditions when they can be improved upon or should be ended (to save time, open my mind in some way, allow for new connections to be made, etc).

Of course, all my resolutions for 2011 are not business related, and I won’t enumerate them here, but I do want to touch on them. I would guess many of you readers have personal as well as professional resolutions for the New Year and they can definitely effect each other, no? Anyway…

I was part of the beginning of BRG resolution-making in December of 2008.

If you notice, there is silverware carefully placed over some of my resolutions, theoretically so that BRG readers wouldn’t see them. However, the real reason was probably that I didn’t want everyone to see goals that I might not really expect myself to achieve. They were resolutions not wishes. They were in my control, not left up to chance. They wouldn’t be easy and would require change. So, in terms of personal resolutions, I resolve not to keep with tradition, to not have the need to put those resolutions on my list in 2012.

I could tell you what my wishes are for 2011 too…but if I told you, they wouldn’t come true!

p.s. It seems to be a new tradition of mine to write blogs that are one week late. I will write about the ALA awards next week, but can’t end this entry without saying how proud I am of my client David Ezra Stein who received a Caldecott Honor for his picture book, INTERRUPTING CHICKEN, and our Grace who received a Geisel Honor for LING & TING: Not Exactly the Same!

*I have decided that action taken to meet these resolutions did not begin on the stroke of midnight January 1st, but the day this blog posted. My resolutions. My rules.