I realized that my dissatisfaction over my previous author photos had really nothing to do with the photos or the background, but my own author photo envy. The truth is after seeing fellow blue rose girl Linda's author photos, I realized how much more these photos could be. Not just a standard snapshot of a robotically-smiling author, Linda's photos are amazing--artworks themselves, they are a true extension of her creative self. See, like this: 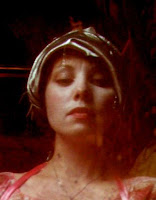 Can you blame me for having some author photo envy? They were such an inspiration that I was determined to do more with my pictures. However, since I have no Ophelia or Amelia Earhart tendencies in my blood or art, I obviously needed to think of something else.

So in China, when I saw this package of Old Calendar/1910-1940 postcards, the bells began to whistle in my head. Wouldn't it be fun to have an author photo like this:

But when I asked my mother if she had any qipaos (the Chinese dresses they wear) that I could borrow and told her why, she laughed. "Come to Taiwan," she said, "They have studios with costumes for people to do that in. It's very common and inexpensive."

So, last week, in Taiwan I did what they call a "glamour shoot." It is VERY common there and it is not very expensive (less than $100. US, though it depends on what package you want--some packages were crazy fancy--bound albums, posters, etc., I got the cheapest one). Apparently, engaged couples and teenagers do these fantasy glamour shoots fairly regularly--they are everywhere. Any store that seems to sell formalwear also offers these shoots. 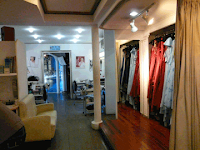 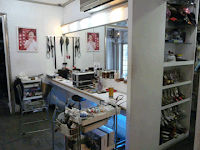 And these shoots are not your run-of-the-mill come in, throw on a costume and get a poloroid either. I had kind of pictured it like the single shots you get at carnivals, when you put on old western clothing and get a fake sepia tintype. No, these are elaborate, complicated affairs that they ask at least two hours for.
So what do they do? Well, at my photo shoot, they covered my face with a mask of makeup so that I couldn't smile, stuck these strange transparent stickers on my eyelids to make my eyes larger, and shellacked my hair so that it could be snapped into two. When they finally allowed to take a peek through my glasses (I was not allowed to wear them so I was pretty blind to what was happening the whole time) it was actually quite a horrifying experience. "Don't worry," the make-up artist said in very broken English, "under camera light, looks very natural."

Well, at that point I just had to take her word for it. So I was pretty scared when I finally got the photos. And for good reason--they WERE scary! There was only one or two that I felt I could live with.

But luckily, one is all I needed...

to make my brand-new author photo! I hope they let me use it for the back of my novel. What do you think?

I LOVE how they turned out, both images are really beautiful (I love Linda's photos too-so dramatic). Now I want to get more creative with mine!

Did you do the effects on the second one in Photoshop yourself, or did they do that? It really looks like one of those old postcards.

Wow, I love how the photo captures the mood of the times. And you look beautiful.

I love the photo!

Hi Grace~ you look like a movie star! Love them both!

Gorgeous! You look fabulous (and Linda's pix do, too)! I liked your original batch, but this is very cool, too. What a great approach, using your author photos to express something...maybe something different to go with each book, in fact.

You look lovely. Great pictures. However, now I really want to see the scary ones. C'mon. Just one?

IMO: I like the bottom one the best - it has a very retro feel to it. I have old calendars in my room from the 50's that are similar in style. The top one is more realistic rather than retro but both are beautiful.

Wait a minute. Which novel is this this author photo for? (Is there one specifically?)

I love those Taiwan photo shoots. I'm overdue for another one. :D