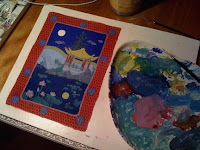 At the start of the summer I had three goals:

1. finish WHERE THE MOUNTAIN MEETS THE MOON to the highest quality possible
2. write THE YEAR OF THE TIGER
3. be/get healthy

As the summer and deadlines have progressed, I'm forced to concede that that accomplishing all three goals are impossible for me. One goal had to be sacrificed.

My first impulse was to let #3 go. I think that is the impulse that many authors and illustrators have. Exercise, eating right, and living takes time--and some of it not the most enjoyable. But the more I thought about it, the more I realized that was the goal that should not be given up. Art is important, my work feeds my soul, but the body needs care as well. If there was anything I learned through Robert's illness is that, as trite as it sounds, if you don't have your health, you don't have anything.

So thus remained #1 and #2. To attempt both would make both works subpar in my eyes, I had to choose. But it was difficult. I loved what I had done so far with WHERE THE MOUNTAIN MEETS THE MOON, I think it is my absolute best writing to date. I want it to be a book that I would be proud of. A book that, no matter the reviews or criticism, I would know that I did to the best of my ability.

But the YEAR OF THE TIGER called to me as well. For me to get The YEAR OF THE TIGER out in the actual namesake year, I had to have the draft finished by fall--or I could wait another 12 years. The Tiger is my year and the year of the Pacy character of the book. How could I not have a book for it?

Then the word came in that WHERE THE MOUNTAIN MEETS THE MOON would be printed in color(!), and the choice was made for me. The publisher's gamble of printing full color novel demands the respect of my full attention. THE YEAR OF THE TIGER will have to wait (Sorry, Janet!).

I couldn't agree more! I have difficulty focusing on a writing project when other things are grabbing at my attention. I think your decision to focus on your health and creating art for WHERE THE MOUNTAIN MEETS THE MOON is a wise one indeed. I know your illustrations for the book will be spectacular. You could still work on TYOTT after you've finished with the art for that book. I believe that people who enjoyed reading THE YEAR OF THE DOG and THE YEAR OF THE RAT would look forward to the third book--no matter what year it was published.

Grace, I think your choice was a wise one and I can't tell you how much I'm looking forward to seeing WHERE THE MOUNTAIN MEETS THE MOON in color!! The work you've posted has been just stunning! Congratulations!