The Third Day of Christmas

1.
This wasn't really the first day of Christmas, but it's the day it started to feel like Christmas. On the day before Christmas Eve, Adam and I walked into town to choose a Christmas ornament for his best friend, a tradition started by their parents when they were babies. Then we had hot chocolate at the icecream shop over the drawbridge, and he asked for "Abraham stories."

I was a little puzzled so he prompted me: Lincoln's sons and the naughty things they did. I told some. Then we just chatted and I asked if he'd ever been to the Christmas pageant with live sheep a church here has. He didn't know what a Christmas pageant was.
"They act out Mary and Joseph in the stable -- the shepherds come (with their sheep), and The Three Kings --"
"I don't know who any of these people are," Adam said.
So I started to tell THAT.
"Is this a true story?"
"Well, lots of people believe it. Millions, in fact."
"I don't."

Of course, I don't think religion should be taught in the schools; but I think kids are missing something if they don't ever even hear these stories. My parents, who were not religious, didn't tell them, either -- but I learned them somehow, maybe from reading, maybe at my English boarding school; and having them in my head (even though I've never been able to believe in them either) has given me something that it's hard to put into words. Could schools here teach them AS stories -- not just the star and Jesus, but all the instruments in the world playing when the Buddha was born and other stories like that, one from each major religion or continent, maybe?

2.
The day of Christmas was with my mother and one of my sisters; one of the things we did was look at old photographs. Here is my mother as a little girl: 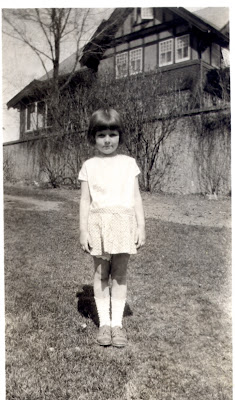 and this one of her in college: 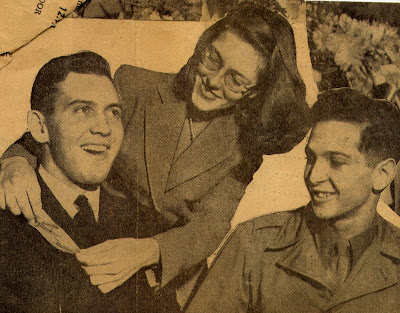 It was from a newspaper, and the caption said: "Co-ed Sally Rumble finds it easy to sell homecoming ribbons to..." My sister and I were both quite amazed at this view of our mother!

3.
And now it's the third day of Christmas, and I plan to celebrate by writing -- or rather, rewriting: finishing a novel so that on Epiphany it can go out into the world for real. Writing it, finishing it, does feel like a celebration because for the next ten days I can write without interruptions -- and when it is done, I can start something new.

I plan to celebrate each day of Christmas, and part of that celebration will be to light candles and look at my decorations -- I bought the garland, but picked the berries myself.

There are 3 children's-book-related ornaments: a snowflake from Grace, 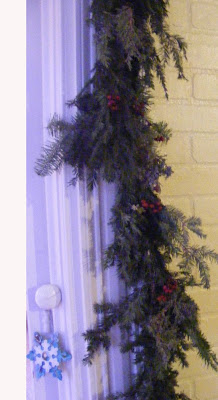 and the orange fish and little bell are from a store where Pamela Zagarenski is the main buyer. This is where Adam got HIS ornaments and he chose an orange fish like mine, only with more glitter. 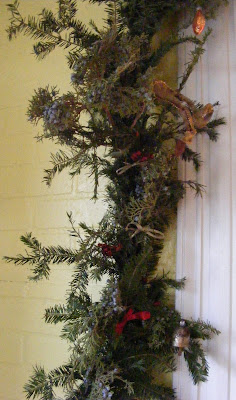 Posted by Libby Koponen at 7:46 PM

celebrating each day sounds like a good idea to me! And looking at old photographs is always fun.

I think the bible stories should be told and people can decide whether they're true or not. I had to learn them in church... and so did my sisters... and now we are all anti-religion. We weren't given a choice as to how to think about them really. Catholic - CCD - teaches them as true. Although, when I did a year of private catholic school in the 9th grade I got a brother who did teach the bible as partially fable, which was really cool.

I agree with Meghan about the Bible stories--I was raised Catholic, and although I'm not religious now, I appreciate knowing all of the stories.

And I loved seeing the old pictures of your mother! She's beautiful. She looked quite spunky!

I loved hearing those stories too, though I wasn't raised Catholic or even Christian. My fifth grade teacher used to read them to us in class with a little warning: "don't tell the principle!" Ha.

Thanks, everyone! I'm glad you agree about the stories and liked seeing the pictures of my mother. I did, too! I always thought she was pretty when I was a child, but not THAT pretty. I never thought of her as spunky, either, but now, I see that she was. At least before she got married.

At my boarding school in England we read the Bible exactly as I describe it in Blow Out the Moon -- a chapter to ourselves first thing, then closed the book and wrote down the story in our own words.

It was NEVER discussed as religion (not that the English are big on that kind of talk anyway). We talked about them as stories and I've always been glad that I have them in my head. I also think that this was great training for a writer! I still have those exercise books and they make me laugh.

OK, back to work -- Happy New Year, everyone, and thanks!
Libby