We had our Focus meeting a few weeks ago where we presented to our Sales, Marketing, and Publicity teams our Spring/Summer 2010 list for the first time. I thought I'd give you all a sneak peek of my (and Connie's) titles:

picture books:
Sit-In: How Four Friends Stood Up by Sitting Down by Andrea Pinkney, illustrated by Brian Pinkney.
This is a title that I'm handling for our editor-in-chief during her maternity leave, and it's been a real honor to work on this beautiful book with such an amazing team. This is a nonfiction picture book about the momentous Greensboro, North Carolina Woolworth's lunch counter sit-ins that started on February 1, 1960. Next year will be the 50th Anniversary of this historic moment that helped spur on the entire Civil Rights movement.

Shark vs. Train by Chris Barton, illustrated by Tom Lichtenheld 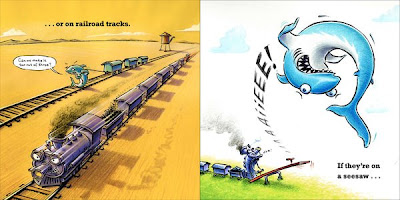 A hilarious, wacky book that pits Shark against Train in increasingly silly scenarios. Shark and Train play basketball, go bowling, play hide-and-seek, have a burping contest, and more. Who do you think wins, and who are you going to root for, Shark or Train?

Look! A Book! by Bob Staake
This is another project I'm handling for our Editor in Chief. Bob Staake is an award-winning author/illustrator of over 40 books who also has numerous New Yorker covers to his name. This is a fun seek-and-find book in the tradition of Where's Waldo, but with an innovative format using die-cuts on every page. 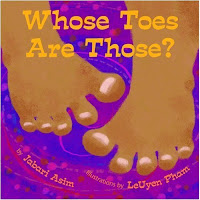 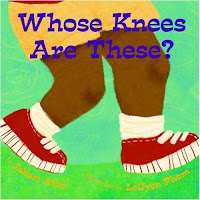 of Mine and Girl of Mine by Jabari Asim, illustrated by LeUyen Pham*
These are two board books that are companions to the adorable Whose Knees are These and Whose Toes are Those by the same team. The text in these two bedtime board books is fun and lyrical, and LeUyen's illustrations are absolutely brilliant. I can't wait to give these books as gifts to my friends with babies! 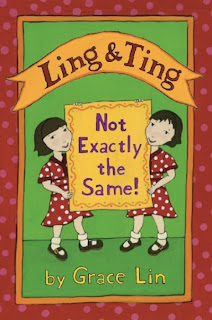 Middle Grade Fiction:
Ling & Ting: Not Exactly the Same by Grace Lin
This isn't really Middle Grade, but it falls between MG and picture book, so this is where we slotted it. This is an early reader, 48 pages, full color throughout, about two irresistible twins named Ling and Ting. They look exactly alike, but in reality they're very different. This is an exciting new format for Grace, and one that we haven't published much before either, but it's an absolutely beautiful, adorable book. Was Ling named after me? You'll have to ask Grace. :)

Moonshadow: The Rise of the Ninja by Simon Higgins*
A fun action adventure set in ancient Japan, and written by an expert of Japanese swordplay. This book was first published in Australia. This is a little more light and commercial that my usual books, but I loved the humor, the action scenes, the little bit of magic, and the historic setting. And although the main character is a boy, he encounters a girl ninja spy along the way, so there's plenty of girl power here as well. And who can resist ninjas?

The Adventures of Nanny Piggins by R.A. Spratt, illustrated by Dan Santat* 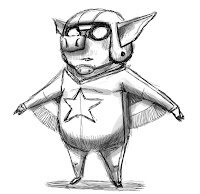 This is my assistant Connie Hsu's second acquisition, but I wanted to include it here because it's so frickin AWESOME. This is Mary Poppins meets Babe with the wicked sense of humor of Roald Dahl. This is the story of three kids and their nanny--who just happens to be a pig, and a wonderful adventurous, stylish one at that. Oh, and she has an insatiable love of chocolate. Here's a character sketch of Nanny Piggins in her former life as a circus pig.

Young adult fiction:
Guardian of the Dead by Karen Healey
This is a debut urban fantasy set in New Zealand and steeped in Maori lore. What impressed me most was the sharp, fresh voice and the kick-ass main character. It's deliciously creepy, sexy, scary, funny, and full of adventure, Maori fairies, monsters, and of course an epic battle. We already have endorsements from Holly Black and Libba Bray, the latter who says, "Mark my words, Karen Healey is going to be a big star." I believe it.

Sorta Like a Rock Star by Matthew Quick
When I first read this novel, I was on the subway, and I was right in the middle of a very tragic, heartbreaking scene that resulted in snot and tears running down my face--pretty embarrassing. But people who know me know that I'm a sucker for books that make me cry, and this was love at first sight for me. This book is Juno meets Stargirl--Juno for it's fresh, spunky voice, and Stargirl because of its message of optimism and hope.


Stay tuned for these books next Spring/Summer!

*books Connie took the editorial lead on
Posted by alvinaling at 8:30 AM

I LOVE Tom Lichtenheld!!! His book, "What are YOU so grumpy about" was inspired! Gravy touching the pea's, he KNOWS his inner child that's for certain!
Can't wait to get my hands on this new book, Shark VS Train!