thank goodness for acrylic - and how I was touched

So I was painting last night, finally with A/C (I'll tell that bit in a minute) and drinking some water, a glass filled to the top with ice and liquid, when I reached over for a brush... or something.... and knocked it over. Oops. Now if you were painting with oil or using pastels, or using watercolors (god forbid), then you'd be (f--) fill in the rest there. I, however, was not. Thank you acrylic paints! Simply pat and dry and you are on your way! 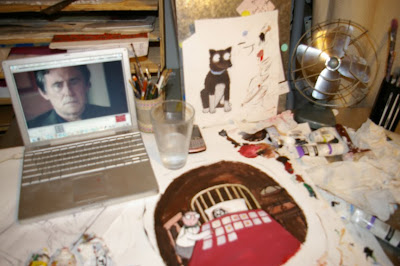 Anyway, it's been about 103 degrees in NYC more of less for the past few days (week?) and I've suffered through it, sweating in my shorts and tank top... but I hit the tipping point two days ago (I guess when I got to the days off pattern in my week - it's like 55 at work!) and I couldn't stand it anymore. I almost passed out a few times, though I think that's due to lack of drinking water and my blood pressure meds and standing up too quickly). So anyway, I NEEDED to finish my book, but I couldn't in the windowless studio of mine, so I went to my landlady and asked her to get my air conditioner from the basement. 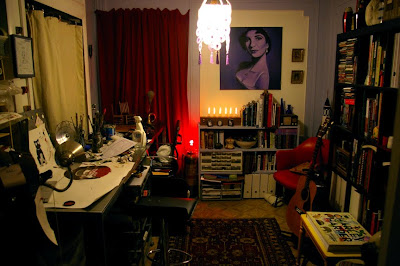 After speaking in Polish to the guy who doesn't speak any english they concluded that there was no air conditioner in the basement! I said "But... but... you guys put it there. You TOLD me to take it out of my window and put it in the basement." She went on to blame me for not doing something sooner. She asked me why I wanted one now. She said the heat wave was almost over. Um, what difference did it make? It was MY air conditioner! (well, it's more complicated than that. She gave me 80 dollars to buy one and I ended up buying a 200 dollar one. But she knew that because I told her. She said - here's 80 TOWARDS one). She says "Well, the 2nd floor has their own, and the first floor brought their own, so I don't know who could have taken it. Did you throw it out?" "NO!" I said. "It was BRAND NEW!" She talked in Polish some more and then said "Here, here, come outside with me." She gestures towards the back window - "Is this yours?" I looked at the back of a metal contraption. How could I tell? but then I read the words ""LG." "Yeah, I think it is. I have the remote control upstairs. We can find out right now if it is because if it is I cant shut theirs off. I was silently INFURIATED because this meant the 1st floor people had TWO air conditioners. " She shook her head and said "I don't know what to do, I don't know what to do..." 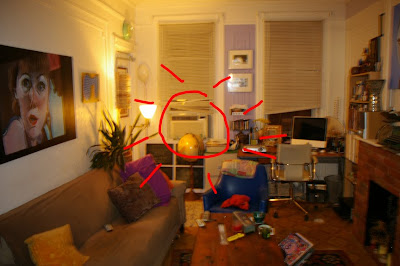 You know what, I don't know why I"m going on and on about my damn air conditioner. I think I've been so hot I've lost my mind! I'm going to stop talking about it. Anyway, that's a long enough post about nothing. I want to talk about something else. I've been so bitter about everything lately. I've felt that my life is a complete waste of time. I mean, I've been so sick and I've seen people get married and have kids and I'm thinking to myself that none of that will happen and I'm just going to be that stupid sick person that everyone has to worry about. I won't be able to get work done on time and no one will want to work with me. My life will be worthless. Then I have these terrible thoughts that why couldn't this happen to someone else? someone who doesn't want to do so much with their life? Isn't that AWFUL? Do I value people just by their accomplishments? Apparently so. WOW. What is this, dear diary??? I'm waaaay off base here.

Back to the point of this. I was at work the other day and a guy came up to me with his kid. He was all paranoid about me thinking they were going to steal this black presentation book. I calmed them down and told them it was fine to "try" it out and told them it was fine for the boy to put his art in it to see how it looked. The kid was SO excited to see how his art looked in the book. He begged his dad to buy the book. He said "You don't know how happy this makes me!" It was obvious to me that he hadn't gotten much art training. I asked him what grade he was in and he said 12th. I guess that meant he was going to graduate this coming year. I asked him what he wanted to do as a career and he said graphic design. I gave him a few tips as to where he could buy cheap art supplies. He knew nothing about this stuff! I wish I gave him my contact info or something, although maybe that would be weird? It just makes me think that if I had more time that I'd love to stop by inner city schools when I could and go to the art depts. to help with portfolios (if they even get that far) and such. It seems sad that kids have such enthusiasm but no guidance. Needless to say, I was inspired by the boy's enthusiasm. I remember how excited I was now, when I was his age. I need to keep more of that with me.

so did you try your remote? was it your ac in the window?

glad you at least did get some a/c, we just put our in too...ah!

in terms of accomplishments, I think it's pretty normal to want them and even to judge people by them on a superficial level--but in the end it's not accomplishments that make a person. Meaning, no matter what happens, your life is and will never be worthless.

But, very sweet that the kid's enthusiasm touched you, I think it's something we all have to remember.

Thank you for sharing, Meghan. I think many of us sometimes feel and think that way...you're not alone! When I visited a city school a few months ago I was shocked by how little they had. They didn't have enough "real" watercolor paper to experiment with. And here I am with tons of scraps I didn't know what to do with. So I gathered them up and brought them - along with supplies I buy on a whim and didn't like. Now I'm eyeing the two portfolio cases I bought over the years that were never quite right... :)

Just that kid's smile... he never stopped smiling! And his dad kept saying "god bless you" just for the few tips I gave him. He was just so excited about a portfolio! And I kind of wonder where he's been getting his art supplies since no one ever told him that Pearl Paint doesn't exist since it's the biggest thing in NYC. Hmmm. Bad art teacher, bad.

I remember when I had to do three drawings to get into risd--a bike, I think I drew stairs? and something else. I just really liked the bike. But they made us fold the drawings several times to fit into a little envelop and mail them. Of course they could have sent a bigger envelop. It was to prove a point. Something like we're not that important yet or our drawings aren't yet there yet... or I'm not sure what. Grace, Anna, Linda, do you guys know what the heck the point was? Anyway, I remember I was sad to fold that drawing! It's funny, but RISD gave us those back after we graduated. Um... I'm not sure what the point of that story was but that memory just came to mind. Maybe someone else can figure out why I was bringing it up....

I think we will forever be folding up our work and letting it go. Only to get it back with a new perspective. A new idea. A new beginning.