Beyond the Book: CLARA LEE AND THE APPLE PIE DREAM

Beyond the Book: CLARA LEE AND THE APPLE PIE DREAM by Jenny Han, illustrations by Julia Kuo 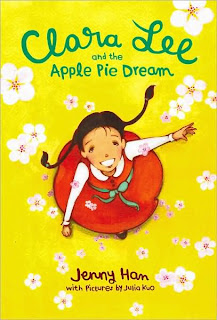 Clara Lee doesn't like her mom's fish soup, bad dreams (but Grandpa says they mean good luck!), speaking in public, or when her little sister is being annoying.

One day, after a bad dream, Clara Lee is thrilled to have a whole day of luck (Like!). But then, bad luck starts to follow (Dislike!). When will Clara Lee's luck change again? Will it change in time for the Little Miss Apple Pie contest?


I'm extremely behind in my Beyond the Book posts--this book pubbed back in January, in fact! But better late than never, right?

I first met Jenny Han at a panel at the Asian American Writers Workshop--she was on a panel with Grace Lin, Justina Chen, and I think David Yoo, too (or maybe that was a different panel...). I had known of Jenny already, as we had been the under-bidder for her wonderful first novel, Shug, which had gone to auction. I hadn't been the editor bidding, but had been one of the editorial readers and had loved it. My assistant at the time, Rebekah, was also a huge Jenny Han fan, and so I purchased a copy of Shug for her (I already had my own copy) and asked Jenny to sign it. Jenny was really friendly and seemed interested to know me. I think we may have bonded over cupcakes or Karaoke when we spoke. And so, when I ran into her again at a Kidlit Drinks night, and then another, our friendship was further sealed. We bonded some more over Pinkberry after Kidlit Drinks, and then started going to Karaoke together. And we started talking books, too. It turned out that she was working on a book for younger kids inspired by her grandfather. Unfortunately, her publisher (S&S) had a project too similar in age/concept already under contract. Well, unfortunate for S&S, perhaps, but yay for me!

I loved the idea of Clara Lee from the start. Clara Lee was a Korean-American girl living in a small, Gilmore Girl-esque town. Jenny envisioned it as a young chapter book with illustrations; Ramona Quimby was one of her inspirations. As Jenny got the manuscript ready for her agent to officially submit to me, we talked excitedly about working together. "I hope I don't hate it!" I joked one night. But of course, I didn't. I loved it. I fell in love with Clara Lee's voice first, her personality, and then her family, her friends, and her town. It felt real, and the book was touching, thoughtful, and also hilarious--especially Clara Lee's relationship with her younger sister, Emmeline.

Thankfully, everyone at Little, Brown loved the project, too, and I was able to offer a contract. While Jenny revised, I set out to find the perfect illustrator. Jenny, her agent (Emily van Beek), and I emailed around different ideas. We thought we had an illustrator lined up, but were starting to run into some scheduling issues. It was around that time that I attended the North American Taiwanese Women's Association conference with my mother. I was selling some of Grace's books for a fundraiser when a friend came up to me and looked at the books. "You know," Annie said, "I have a friend who's a wonderful artist. She would be a great children's book illustrator." Now, you can probably imagine how often I hear this, but I'm always open to possibilities, and so I asked her to tell me more. "She works for a greeting card company," she said. "Her art is so beautiful! It's so cute!" And so I asked her to email me her website. I'm so glad that she didn't forget, because when I visited Julia's site and saw her art, I fell in love. I mean, look at this art! 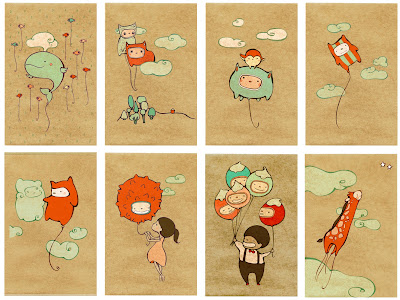 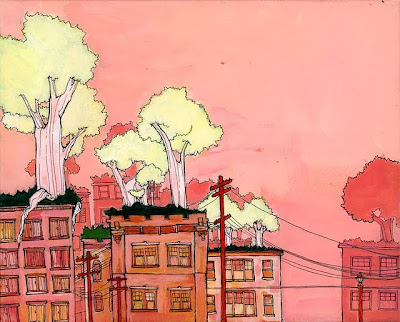 Jenny fell in love with her art, too. And thus a team was born! Julia was in NYC last Fall and we were able to all have lunch together, along with Julia's new agent, Emily van Beek! 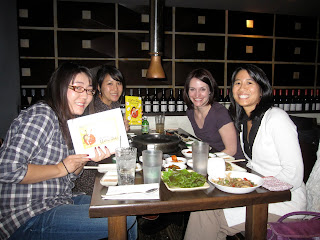 We had Korean food for lunch, which was very fitting. And delicious. Yay!

Before Julia started on the art, Jenny sent me a few pictures to share with her as inspiration for Clara Lee, Emmeline, and Grandpa. I couldn't resist sharing a couple of the pics with you. Here's little Jenny:
And here is Jenny's Grandpa with two cousins:
This is one of Julia's cover sketches, which turned out to be very close to the final book cover! 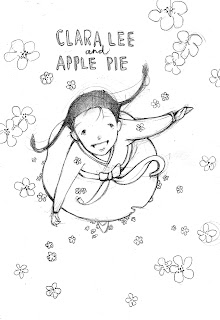 Here are some of the interior spots and full-page illustrations: 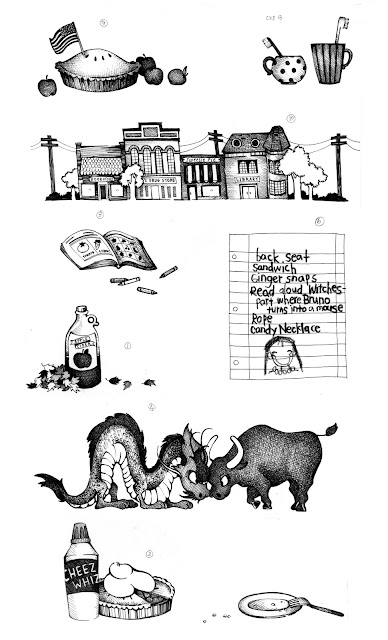 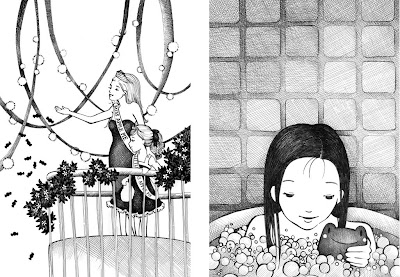 All in all, it's such an adorable package. And there's even GLITTER on the cover! The glitter was actually Jenny's idea--and I'm so happy we were able to make it happen. It's the first book I've ever edited that has glitter, even!

Clara Lee and the Apple Pie Dream was originally titled Clara Lee, Dream Genius in Training. I love the latter title, too, but it didn't turn out to be the most accurate title for the book. Also, we were afraid that it was a little too similar to the title Millicent Min, Girl Genius by Lisa Yee. But who knows, if Jenny Han writes more Clara Lee books (and I hope she will...although she's a bit busy with her YA novels right now...), maybe we'll get to use that title eventually!

As Jenny says on her blog:


This book was originally an assignment for my Writing for Children class at UNC, and it was called Grandpa’s Best Girl.  It was about when your grandpa gets sick and has to go live in a nursing home and doesn’t live with you anymore. Yeah.

This new version is a chapter book and not at all sad and is mostly adventures and happy times with Grandpa in the garden.  There is dream interpretation and even a Little Miss Apple Pie pageant.  It is pretty much a valentine for my grandpa who died when I was 15, so no one is allowed to say anything bad about it.  Just kidding!

Listen to Jenny Han read an excerpt of the book, and also listen to me interview Jenny here!
Posted by alvinaling at 8:30 AM

Email ThisBlogThis!Share to TwitterShare to FacebookShare to Pinterest
Labels: alvina, Beyond the Book

The book sounds great, and I love the cover. Thanks for sharing the story behind it. Sadly, the interview link didn't seem to work for me.

Whoops--I fixed the link, thanks for the heads up.

Wonderful entry, thank you for sharing this adventure from idea to print! Also, on a random note: I wondered how one can search with in this blog to find certain topics. Is there a search option? I have a question as to how much to charge for school or library visits. I am a newbie to that endeavor with my picture book. All the best, Tiffany