Friday:
Friday in Auckland began with a Publisher's Forum. About 50 people from the New Zealand publishing industry were on hand for the discussion. The session opened with a panel on rights selling in the international market. I think the main takeaway of the session is how important the face-to-face meeting is, how important relationships are. As Stephen Maat (Bruna Netherlands) said, he could meet with a publisher every year for ten years and never buy anything, but there will be that day that they call him up, or send him that email and say, "This is the perfect book for you" and it will be.

Then, I was on a panel along with Tom Mayer (Norton) and Fergus Barrowman (Victoria University Press). Hal Wake (Vancouver Writers' Festival) moderated. A lot of what we talked about was how eBooks were changing the publishing industry--in NZ and Australia, eBooks have yet to hit the level that they have in the States, because they don't have the Kindle, Nook, or iBookstore. Tom talked about the opportunities and potential changes that eBooks and the market of Kindle Singles could have on the industry, particularly with nonfiction--eBooks may make it more acceptable to publish a 25 or 50 page book, as opposed to having to expand a nonfiction subject into longer, book-length work. Other advantages include being able to update nonfiction more frequently. We talked about the shift of making paper books more gifty, more objects to keep, vs the type of books that may eventually become e-only.

After a networking lunch we had one-on-one meetings with New Zealand publishers and agents--some just wanted to talk business/pick my brain about publishing in the US, some pitched books.

I finished up with meetings early enough to go for a run before dinner--unlike the rainy Wednesday, the weather was perfect for a run in the Auckland Domain.

I had a delicious sushi dinner with Cassandra Clare and her husband Josh--I had run into them in the lobby earlier--and then I was off to a cocktail party hosted by the Fesivals' board of trustees. Then back to the hotel where once again Karen Healey, Garth Nix, Sean Williams, Margo Lanagan, and others were convened in the hotel lobby for wine and sea breezes.

Saturday:
In the morning I met up with Alexis Warsham (Crown) in the lobby and we walked over to the Aotea Center where our Publishing Panel (this one open to the public) was housed. We found our way through back passages to the Green Room where Tom, Nikki Christer (Random House Australia) and our moderator publishing consultant Geoff Walker were already convened. We covered much of the same ground as our Industry Publishing Panel--talked a lot about eBooks, Amanda Hocking, Barry Eisler, etc etc. But of course when the Q&A portion began, we got a bunch of the expected "how do I get published" questions, and even one woman who was bold enough to actually pitch her book--luckily, it wasn't a children's or YA book, so I didn't have to turn her down in public, OR invite her to send it. One audience member asked us what we thought of the recent news that an agent was becoming an eBook publisher--to be honest, because I hadn't been able to check email and read the news as regularly while in NZ, I hadn't yet read about the news. Some of the others had heard the recent news of agent Ed Victor exploring eBook publishing, but the audience member mentioned it was the Andrea Brown Literary agent, which none of us had heard. So, basically, our response was, "we need to know more about it before we can comment" but "it might be a conflict of interest".

After a quick lunch, I was off to see Karen Healey speak with another NZ author, David Hair: 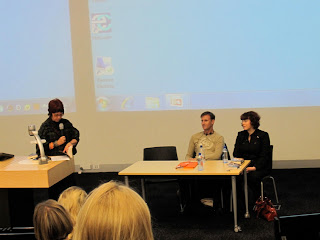 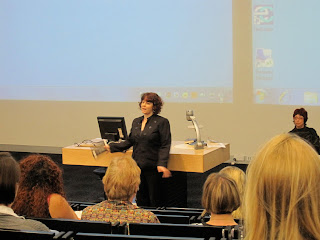 And then...and then I was off for the adventure I had hoped to have when I first arrived in Auckland. Behold, the Sky Tower, the tallest free-standing structure in the Southern Hemisphere: 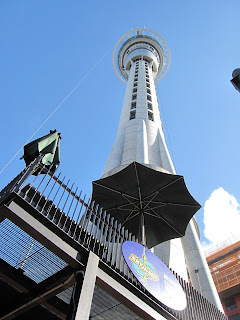 First, the walk. We walked the circumference of the tower with no rails:
Then, after a trip back down to the bottom to change my jumpsuit (apparently people get nervous when they see the orange jumpsuits falling off of the tower) I did the jump: 630 feet in 11 seconds!

Now, let me just say now that I'm not afraid of heights. At all. Sure, I may get a bit of a fluttery stomach sometimes, but usually barely even that. So, it's not like I wanted to do this to conquer any fear I had or be brave--I just wanted to do it because I thought it would be a beautiful view of the city (it was) and because I thought it would be fun (it was!). And, it's something different to tell people I did in New Zealand!

That evening I had a lovely and yummy Thai dinner with Karen Healey, and then we went to the Festival's closing party for all participants at the Alleluya Bar and Cafe. A good time was had by all. But I couldn't have a super late night, as I was leaving at 6:30 am for the airport to fly to Sydney.

Good-bye Auckland, hello Sydney! Leg #3: Sydney will be next. To be continued, yet again!
Posted by alvinaling at 7:26 AM

We met at Kidlit Drink Night during BEA and you were kind enough to give me a few ARCs. I just wanted to let you know that I've reviewed Daughter of Smoke and Bone, which I ADORED. (I also loved The Shattering, but I'm waiting to post my review until it comes out because I wanted to say a couple of spoilery things.) In fact, your books were my two favorite BEA ARCs, so thank you!

Sorry to post on a group blog; it seemed from some cursory Googling like this was the best way to get in touch with you.

LOve this post and the view of Auckland Harbor. I want to go back!

Oh my god, I'm SO jealous of your stunt! I want to do that!

meghan, who needs to go on some sort of adventure soon or else