Like Anna, I'm redecorating too! My pet project is the baby's room. I have big plans for it. At first I though I would paint a mural in it like I did for some friends  but the view outside changed my mind: 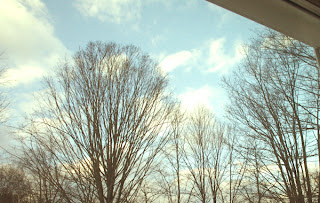 and I decided on an elaborate sky ceiling instead. First, I needed to paint a daytime sky with soft puffy clouds which meant blue paint on the ceiling: 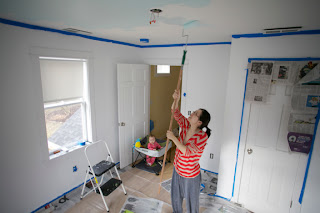 Rain Dragon watched me with great interest and confusion the whole time. Since she was going to be witness to all my painting I used low voc paint which is pretty amazing-- it really is odorless!--but gave me a bit of shell-shock at the cash register. So I tried to use it sparingly. The color is Benjamin Moore Barely Teal, which is a very light greenish blue instead of the typical sky blue because I wanted more of a fairy tale sky.

But I still wanted the clouds to be realistic looking. So I mapped out cloud formations: 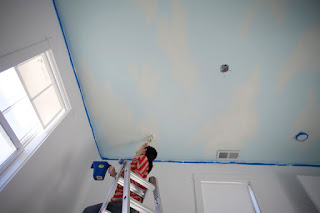 and then I layered in four different shades of white (just in case you want to do this yourself the colors were Benjamin Moore Chantilly Lace, Vanilla Ice Cream and then a mixture of Vanilla Ice Cream + Peach Parfait  and a mixture of Vanilla Ice cream + Majestic mauve) to give the clouds depth.  Painting clouds and making them look real isn't that difficult (the trick is to dry brush--not a lot of paint on the brush and be willing to ruin your brush by scrubbing the color in with it), but it is time consuming--mainly because you have to keep going up and down the ladder to figure out each step. It took me a couple days until I was satisfied.

And while I liked how the winter white color of the walls brought out the whiteness of the clouds, I felt it was too cold for a baby's room. So we changed the wall color to a soft cream which makes the clouds look a little peachy--like a clouds at sunrise. 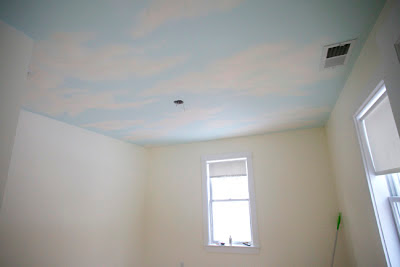 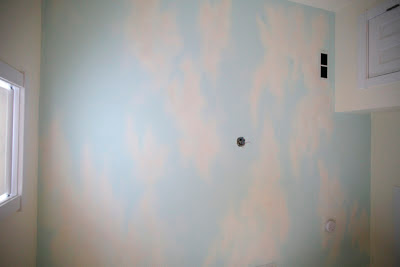 I think it turned out well, if I do say so myself! I admit I'm pretty proud! 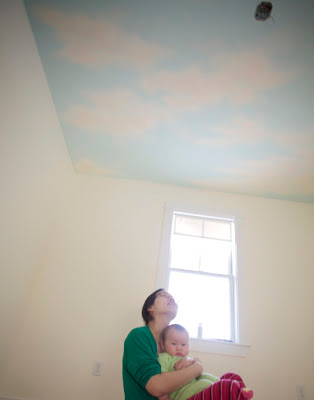 Grace, these photographs are pretty but they don't do justice to the soft peachy pink beauty of those clouds! The way they capture the light really is magical....I bet she will love gazing up at it, if she's ever alone in a crib.

What a great idea! Beautiful! You should submit that to a home magazine!

It looks amazing! Can't wait to see the finished room.

Great idea, Grace! I'm sure little Rain Dragon will enjoy gazing at the beautiful sky painted on the ceiling of her own bedroom.

It's so bright and happy. It turned out beautiful, Grace!