Whose image is it anyway?

My editor (NOT Alvina, an editor I've been working with on a non-fiction project) and I discussed the author photo for a book about South America. I said I thought it would be fun to have a picture of me in Cuzco, Peru, instead of just the usual boring head shot. She agreed.

So I sent her the picture, warning her that *I* looked kind of dorky but that thought the background (the light and that beautiful Inca stonework) was worth it. She agreed: well, she didn't say "You're right, you do look like a dork," she said it was "a nice picture" and that she liked the idea of the picture going along with the book, too. [NOTE: The images are sharper and the colors are deeper in Photoshop than here on blogger.] 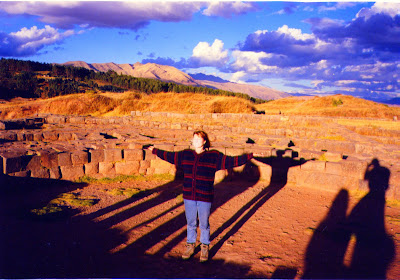 So I asked what size they wanted, she found out, and I sent her this, as instructed, a little bigger than the final print sized so the designer could crop it: 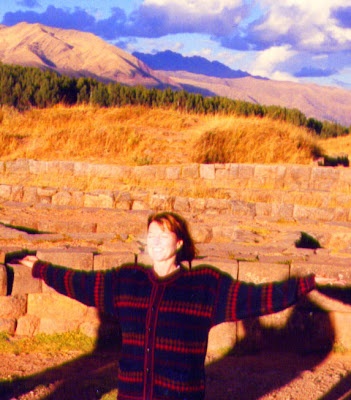 A few days later I got an email from her saying:
"So much for thinking outside the box," and then giving the designer's comments....I better not quote them, but the gist was that they wouldn't use the picture because:
*the eyes were closed
*the sun was shining right on my face (that was the whole point, it was in the Temple of the Sun I'd written about in the book)
*all the other author photographs were head shots
blah blah blah

I'll get another picture taken, I should have a real one anyway -- but it seems bizarre to me that when the author and editor both like a picture we can't use it. If I don't mind looking like a dork why should the designer? I WILL get a professional to take a real author photograph; but I don't expect to be going to Peru anytime soon so it will have to be taken here. I have mixed feelings about how important it all is anyway: has anyone ever not bought a book because they didn't like the author's photograph, or bought one because they did? But come to think of it, probably how you look does have a lot to do with whether or not you're invited to schools, and red isn't the best hair color for me (what was I thinking?)so it will be just as well to have a better photograph. But I still think the picture should be up to the author.
Posted by Libby Koponen at 8:22 AM

From what I remember of author photo discussions, kids are curious to see what an author looks like, so in that case your photo doesn't help. And some publishers are more conformist in terms of certain design elements. That said, I do agree that in the context of your book, this photo is great, and it's so beautiful, too. I like the full-frame shot myself.

Given all the arguments about Thatcher Hurd and his cigarette, Shel Silverstein's bare feet, etc., maybe publishers are just more sensitive now. Maybe overly so.

Thanks, Yamster! This thoughtful comment makes me see their point of view AND validates my feelings about the picture, quite a feat to do both in one short comment....thank you!

Its such a beautiful picture- it really looks like a fine art photo with the light like that- I think it would look great on a jacket flap. I don't know if those traditional head shots really let kids know what an author looks like anyhow... its rare that a shot like that actually captures a person.

Good point, Anna — not only is the photographer trying to capture a 3-D person in 2-D, he/she must also try to infuse some personality into the photo. I remember after the success of TOOT & PUDDLE, we were asked to replace Holly Hobbie's jacket photo with one that made her look "friendlier." (Coincidentally, Libby, she went from having gray hair in the first photo to red hair in the second!)

Your photo reminds me of the photo Barbara Mertz (writing as Elizabeth Peters) has been using on the back of her mysteries for ages. She's dancing around at a ruin (she's an archaeologist after all). But maybe kids books are stricter?

I generally agree with your right to choose your own photo, but the designer's comment about the sun shining right on your face is relevant because it actually makes it hard to see you; your face here is just sort of a white glowing shape in the middle of the image, and not, you know, a face.

Interesting points everyone and thanks--Anna, I'm glad you like the picture and Yamster, great story. Anonymous, I know the face doesn't show--the point is to show the place, not me....obviously it would be better to have a picture that showed BOTH, but since I don't, I went for the one that showed the place.
--Libby