Recently, I was a bit dismayed when I was told that the bookstore would prefer that I not serve any food at my book launch. It was understandable (they had had some messy mishaps) but I was distressed. How could I have a book party without cupcakes? I couldn't do that!

So, after much thought, I decided that my book party WOULD have cupcakes, but they would be favors to bring home in the goody bag. To make it more fun, I am thinking about baking a coin inside one of them and whoever gets the cupcake with the coin will win a prize.

But even without the prize, I want each cupcake to be a treat. As you may know, cupcake decorating is a little dream of mine so I've been trying to think of some themed cupcakes that fit my book (a Chinese-folktale fantasy, not a lot of cupcakes in it). After searching the internet, I decided I would go for something like this: 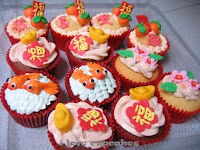 But, now I needed the decorating skills to do it! (Enthusiasm does not equal skill, unfortunately). So enter in last night's CUPCAKE CLASS!

This is a class I signed up for long ago, and even though it came at a horrible deadline time, I still (guiltily) went. But it was a blast. I learned the basics of pastry bags and cake tips. 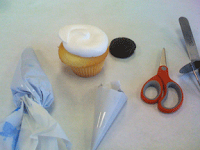 Experimenting with each tip, we made fun designs: 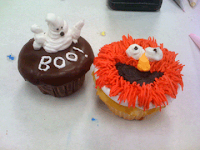 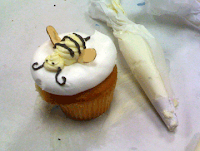 and I finally learned how to make a frosting rose! 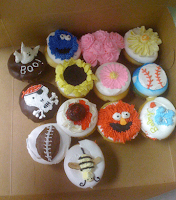 By the end of the class, I felt like I would be able to make some pretty decent cupcakes for the launch. That means you'll come, right?
Posted by Grace Lin at 9:54 AM

WOW!! Those are awesome. I especially love the monster one. Yay!

amazing! you are such a cupcake natural. I *love* the roses and the sunflower and the bee. I get you will make great goldfish.

Oh my goodness these are beautiful, my favorites are the rose, the bee, and the yellow flower in the corner (I don't know my flower names well enough to name it). I want to watch you do it.

Woah! Those are amazing. Well done, Grace. They make me want to hop on a plane to come to your book launch.

OMG those are gorgeous!!! I love Elmo and now he's a sugary confection - what could be better?... Nothing.

You never cease to amaze me! Those are da bomb! And seeing as how you still owe me a chocolate rat from your last book launch party, I am thinking maybe I'll get the COIN this year. Wink wink

Mmmm... I wish I could be there! Now there'll be TWO kinds of beautiful art to celebrate! (Well, three if you count the writing, which you should!)