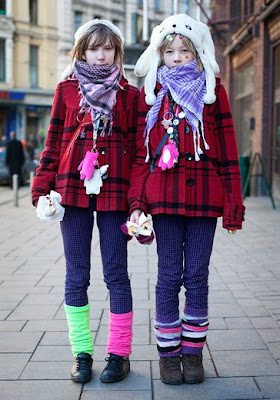 This has nothing to do with chidren's books -- but it's fun to look at on a rainy Sunday. It's a page from one of my favorite Web sites, hel-looks -- the hel is for Helsinki. Each day on this site they post a photograph of a look they saw on the streets there, with a one-paragraph commentary from the wearer.

Occasionally,it's not one, but two girls (or boys) who dress alike -- not all the people they photograph are young (there are even some in their sixties, seventies, and eighties), 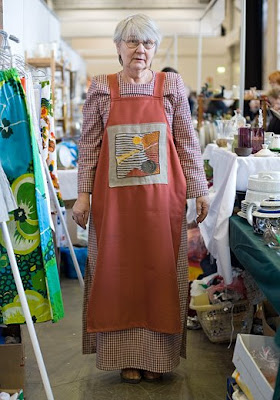 but I've never yet seen people out of their teens (or maybe early twenties) who enjoy dressing just like their best friend. In real life or on hel-looks.

I'm not sure why I like this site so much: because I'm half-Finnish and many of the people look enough like me to be my cousins, because the clothes are so different from anything I'd see here in CT, or just because I like the bright colors. When we have grey day after grey day as we have here lately, I really understand why all the furniture in Scandinavia used to be painted every bright color there is.....and why people there dress so colorfully. 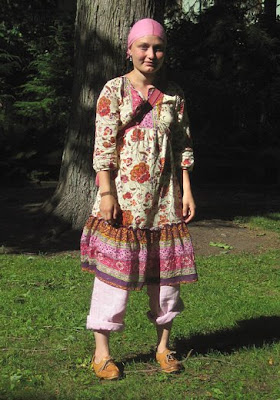 And in case anyone is interested: the old lady is wearing clothes she made herself (she says pinafores make baking easier and more fun), the girl in the last picture second hand clothes and the traditional Finnish folk dancing shoes she had as a kid. In some of the pictures people are wearing vintage Marimekko from their mothers' and grandmothers' closets -- if only MY mother had been into that!

I think one reason I like this site is that it shows that you don't have to be beautiful, or young, to look great. Maybe that's what it has to do with children's books. These people look great because they're not afraid to take chances and express who they are.
Posted by Libby Koponen at 10:13 AM

I love this blog, too.
-alissa

This site is so great! I love seeing how people have fun with clothes. Sometimes I read the Darling Dexter blog, she has a rotating banner with pictures of her daily outfits all the time. So cute.

any two people who dress alike are funny or fun to look at. Perhaps you'd like the book, I think it's called Fruits? - all japanese crazy dressed kids.