Blogging for a Cure: Week #3 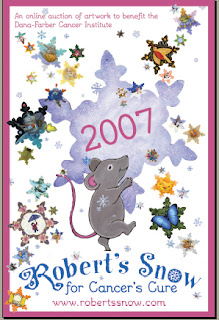 You will find the schedule for Week #3 of Blogging for a Cure below. Every day some of the picture book illustrators who have created snowflakes for Robert’s Snow 2007 will be featured at different children’s literature blogs. Robert’s Snow is a unique fundraiser. The proceeds from its three 2007 auctions will go to the Dana-Farber Cancer Institute for cancer research. Read all about Robert’s Snow: for Cancer’s Cure here.

NOTE: I have linked to the blogs that will be posting features about the Robert’s Snow artists this week—not to the specific posts. Jules and Eisha of 7-Imp have created a special page that includes a list with links to all the Blogging for a Cure posts. Their list is updated every day.

Monday, October 29
Dan Santat at Writing and Ruminating
Joanne Friar at The Longstockings
Alissa Imre Geis at Wild Rose Reader
Diane Greenseid at Just One More Book!!
Sean Qualls at Brooklyn Arden
Tuesday, October 30
Ann Koffsky at Book Buds
Bill Carman at A Chair, A Fireplace & A Tea Cozy
Gretel Parker at Finding Wonderland
Matt Phelan at A Year of Reading
Stephanie Roth at Writing with a broken tusk
Wednesday, October 31
Shawna Tenney at Kate's Book Blog
Adam Rex at Booktopia and Welcome to my Tweendom
Mo Willems at MotherReader
Rolandas Kiaulevicius at a wrung sponge
Thursday, November 1
Karen Lee at sruble's world
Diana Magnuson at A Chair, A Fireplace & A Tea Cozy
Melissa Iwai at Brooklyn Arden
Victoria Jamieson at AmoXcalli and Cuentecitos
Molly Idle at The Shady Glade
Meghan McCarthy at A Fuse #8 Production
Friday, November 2
Tracy McGuinness-Kelly at Sam Riddleburger's blog
Sarah Kahn at Kate's Book Blog
Sylvia Long at Whimsy Books
Jeremy Tankard at the excelsior file
Holli Conger at Please Come Flying
Saturday, November 3
Susan Miller at Your Neighborhood Librarian
Ellen Beier at What Adrienne Thinks About That
Hideko Takahashi at The Silver Lining
Judith Moffat at Jo's Journal
Wendell Minor at Wild Rose Reader
Sunday, November 4
Joy Allen at Check It Out
Robin Brickman at Greetings from Nowhere
Lauren Stringer at laurasalas
Nancy Wallace at In the Pages . . .
WIN A PRIZE!!! I do hope you’ll stop by to read my Blogging for a Cure articles at Wild Rose Reader and to comment about the artists and their work. I have a special prize for some lucky person who leaves a comment at any of my six posts featuring a Robert’s Snow artist: a limited edition giclee print of an illustration from Grace Lin’s book Robert’s Snow! That’s right folks! Here’s a picture of the print that I picked up at the Child at Heart Gallery. 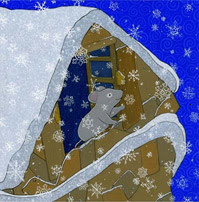 Each time you comment at one of my Blogging for a Cure posts about a Robert’s Snow artist, I’ll put your name in a hat. If you comment at all six posts, your name will go into the hat six times! The drawing will take place on November 19th, the day bidding begins on the first of three Robert’s Snow 2007 auctions.
I also have several consolation prizes for commenters who don’t win the “big” prize: five small prints of the Robert’s Snow mouse(mice).


Note to Blog Readers about Blogging for a Cure: When Jules of 7-Imp put out her call in September for bloggers to interview/feature artists who had created snowflakes for Robert’s Snow 2007 at their blogs, a number of artists had not yet sent in their snowflakes to Dana-Farber. As time was of the essence to get Blogging for a Cure underway, we worked with the list of artists whose snowflakes were already in possession of Dana-Farber. Therefore, not all the participating artists will be featured. This in no way diminishes our appreciation for their contributions to this worthy cause. We hope everyone will understand that once the list of artists was emailed to bloggers and it was determined which bloggers would feature which artists at their blogs, a schedule was organized and sent out so we could get to work on Blogging for a Cure ASAP. Our aim is to raise people’s awareness about Robert’s Snow and to promote the three auctions. We hope our efforts will help to make Robert’s Snow 2007 a resounding success.


These are the Robert’s Snow artists who will be/have been featured at Wild Rose Reader.