Last week, I neglected to mention one other book I edited that is out this Fall: The Fabulous Bouncing Chowder by Peter Brown. Peter has had quite a bit of good things happening for him lately. First of all, and perhaps most importantly, he was finally named a Hot Man of Children's Literature by Fuse #8.

He was also selected to be included in the Original Art Show at the Society of Illustrators for the second year in a row for The Fabulous Bouncing Chowder. Here is Peter with his original art: 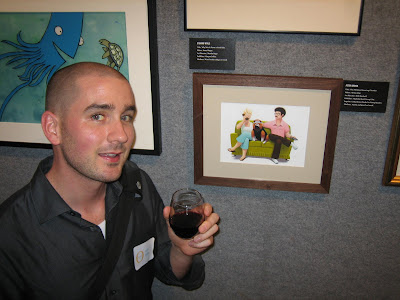 As usual, it was a fabulous (although hot and crowded) event. I saw many familiar faces, including a few former colleagues who were down from Boston. My company treated our four illustrators who made it into the show to a nice dinner afterwards: Jerry Pinkney for Little Red Riding Hood, Chris Gall for There's Nothing to do on Mars (coming in February), Peter Brown, and Patrick McDonnell for Hug Time, although Patrick was under the weather and didn't make the event. But the dinner was lovely, and I had the privilege of sitting across from Jerry Pinkney,which was a treat because he and his wife an fascinating stories to tell about everything from Moscow, to Vegas, to hope.

A few of us made it to the Kidlit drinks night afterwards, although we did miss the raffle that Jarrett had organized. But there were quite a few people still out, including Meghan and newlywed Jarrett, and I was happy that the venue I suggested, Baker Street Pub (selfishly, in part, because the bar was 10 blocks away from my apartment), seemed to work out well.

But back to Peter and his good news: when he told me this story, it made my day--make that, my week, month, year. It's always wonderful to get positive feedback about the books I've worked on from fans, but when that fan is somewhat of a hero to you, it's that much sweeter and more amazing. I asked Peter to tell the story in his words, so here you go:

I was at a book signing with Doreen Cronin, Nick Bruel, Elise Broach and John Segal at Books of Wonder. Doreen and I were standing around chatting and waiting for the official signing to begin when I heard, "Look that's Peter Brown, the guy who made Chowder." So I turned around and saw that my hero, Jon Stewart from the Daily Show, was talking to his son Nate and pointing at my name card on the signing table. Doreen and I immediately became quite nervous and forgot what we had been talking about. After failing to salvage our conversation we decided just to sit down and see what happens.

While she and I had been talking, I think, but I'm not positive, that Jon Stewart had John Segal sign a copy of his book for them. And then almost immediately after I sat down, Jon and Nate walked over to me, handed me a copy of The Fabulous Bouncing Chowder, and asked if I could sign it to Nate and Maggie.

There was a pause as my brain tried desperately to figure out how to not come across like a giddy schoolgirl.

"I just have to say that I'm a huge fan." That seemed like a good start.
"Oh, thank you very much." Jon replied.
"So who's Nate?" I asked hoping for some fun banter with Jon's son.
"I am!" said Nate.
"Who's Maggie?"
"Sister!" said Nate.
"She's his sister," added Jon.
"Alright then, I'll sign it to you two," I said as my nervous hand
scrawled an almost illegible signature on the title page. "And I'll make a little drawing in here as well."
While I was personalizing the book Jon said to me, "My son thinks it's very funny that Chowder sits on the toilet."
"Oh, so you've got the first Chowder book?"
"Yes we do," said Jon, "It's one of our favorites."
Awwwwwww Yeahhhhhh! I thought to myself.
"Well then, you might be happy to know that there will be a third Chowder book someday, and possibly even a TV show."
"That's great!" said Jon. "Hear that Nate? You might get to see Chowder on television."

I handed the the book to Jon and Nate. They seemed to really like the little doodle I drew of Chowder bouncing on his trampoline, so I said to them, "Hold on a second, let me show you something."

I reached into my messenger bag and pulled out the immaculately framed original illustration from the first page of the new Chowder book. I had it because I had to drop it off at the Society of Illustrators when I was finished with the signing.

"So this is the actual painting that I made for the book, see?" And I put the painting next to the page in the book. "I had to sit down for hours and hours and paint this by hand, and then months later it magically appears in this printed book! Pretty cool, huh?"
"You actually painted that?!" Jon asked...he was impressed.
"Yup, I'm the author and illustrator of these books, so I do it all."
"That is very cool." Said Jon, and he reached out to shake my hand.
Another Awwwwwwwww Yeahhhhhhh!
"Well it was very nice meeting you both," I said.
"Very nice to meet you, too," Jon replied, and then he and Nate left the store.

I felt a little bad that they didn't approach Doreen, or any of the other authors, but I figured, Doreen has probably sold about a million more books than me...she can let me have this one little honor.

Email ThisBlogThis!Share to TwitterShare to FacebookShare to Pinterest
Labels: books alvina has edited, society of illustrators

AHHH Jon Stewart!! Are you kidding me?! That is SO AMAZING.