***More pics added below***
Last Tuesday I attended The Carle Honors, a dinner to benefit the Eric Carle Museum. The dinner also awarded "the creative vision and long-term dedication of key individuals and organizations to the art of the picture book and its vital role in supporting art appreciation, early literacy, and critical thinking." This year's recipients were illustrator Ashley Bryan, Martin and Lillie Pope of the Ezra Jack Keats Foundation, editor Margaret K. McElderry, and Twila Liggett of Reading Rainbow.

I had never attended this dinner before, and didn't know quite what to expect. It was held at The University Club, and my colleague informed me on the walk over from our office that it was an old-school place--the type of place that had a "men's only" library and made you take the freight elevator if you were wearing jeans. 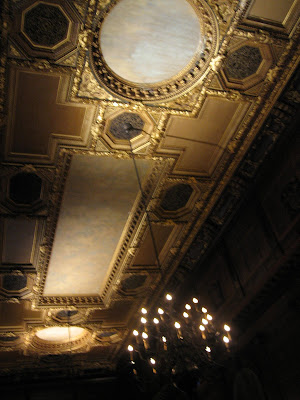 The building was beautiful. High ceilings, tastefully decorated. Conservative, but not stuffy. I immediately spot Holly Black and Betsy Bird talking, and go over to say hi. I later say hi to Peter Brown (Chowder), Mo Willems, Chad Beckerman and Jason Wells of Abrahms, Jennifer Abbott of Holt, and more. Mo Willems tells us that he was almost not let in because he was wearing jeans. They made him take the freight elevator up. Peter tells me that he had to buy a tie--they were lending ties out, but none of them matched (eye roll). Many others had to borrow ties and suit jackets. Guess us children's book folk aren't used to dressing up!

Edel Rodriguez (who's first picture book that he has both written and illustrated, Sergio Makes a Splash is coming out next Spring), is our guest at our table--table Z. We're seated with agents and some Clarion folk. The food was lovely--salad with goat cheese, a nice, juicy, rare steak, and an apple tart. The first two speeches were incredibly brief (Margaret McElderry, who I believe is over 96 years-old, simply said "Thank you" into the microphone from her table). One interesting thing I discovered was that Margaret was the first to have edited both the Newbery and the Caldecott winner in the same year--amazing. Curious as to what the books were, I looked it up: in 1952, Finders Keepers by Will Lipkind and illustrated by Nicolas Mordvinoff won the Caldecott and Ginger Pye by Eleanor Estes won the Newbery. 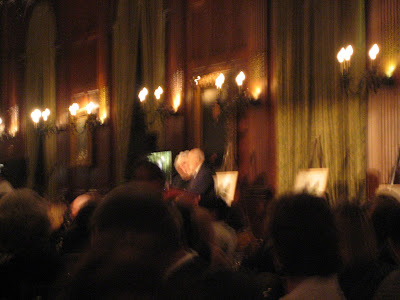 blurry pic of Eric and Barbara Carle
All in all, it was a lovely event. I even got to meet Eric Carle afterwards, which was an honor. I hope to attend again in the future.

Edel took this pic of me chatting with Eric and Barbara Carle: 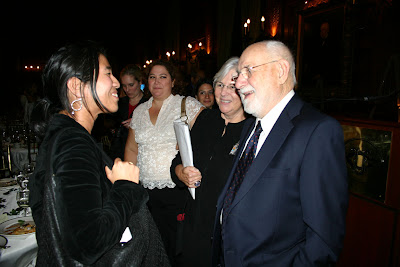 And I took this pic of Eric and Edel: 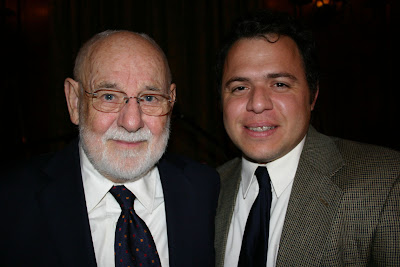 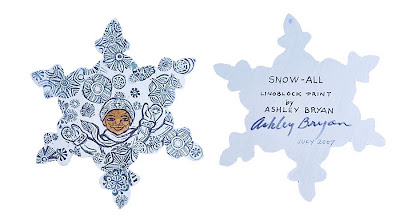 See the rest of the snowflakes here--and keep checking back, more snowflakes are coming down every day!
Posted by alvinaling at 7:57 AM

What a great post! Thanks for sharing, and I'm glad the BRGs are back. Woot!

Sounds like a fabulous event! Its true we authors have a different idea of what dressed up is...

did you see their private library? it's completely nuts and totally straight out of HP.