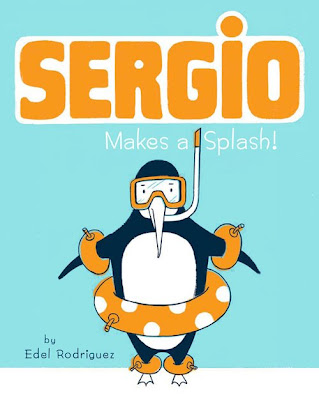 It's been a while since I've posted the acquisition story for a book I've edited, in part because I haven't had a book by a brand-new author/illustrator come out in a while. Well, I have a new one for you now.

You've all probably heard me mention Sergio Makes a Splash by Edel Rodriguez before. This isn't Edel's first book that he's illustrated--he has Float Like a Butterfly; Oye, Celia!, and a few others. But Sergio is the first book he's also written, and it's the first in a different art style.

I met Edel for the first time I think about 5 years ago. My company was still part of Time Warner, and we were in the Time & Life building. Along with all the Time Inc. Magazines that we got for free that I sorely miss (especially Entertainment Weekly and People), we also received a company newsletter/internal magazine that highlighted things going on within the company (new movies, magazines, etc.), and also occasionally profiled employees who were doing interesting things. Well, in one issue I saw a little profile of Edel Rodriguez, who was an Art Director for Time Magazine. The profile mentioned that Edel was a children's book illustrator, and I thought, What? An illustrator possibly right here in the building (Time was also housed in the Time and Life Building), and I don't know who he is? I promptly looked up his books, and loved his art style. I was also very interested in picture book biographies, and he had illustrated a few of them. I emailed him to introduce myself, and the next day he came down to my office and dropped off his portfolio.

I showed the portfolio at editorial meeting, and everyone loved his stuff. At the time, I was pursuing a picture book biography of Jimi Hendrix, and thought Edel would be a perfect match. Unfortunately, that project didn't pan out (I believe the book will be coming out with Clarion later this year), but I always kept Edel in mind for projects.

Several years later, in February 2006, I received the submission for Sergio Makes a Splash from his agents at Pippin Properties. Sergio is a penguin who loves water, but is afraid of deep water, because Sergio can't swim. Edel was inspired to write this story after observing his daughter and other neighborhood children in their backyard swimming pool.
I've always loved penguins, and I was so taken by this adorable character. I also loved the new style Edel was using--a very simple, bold, three-color style that felt both retro and fresh. Everyone loved the character at our acquisitions meeting as well, and we made a two-book deal.

There was some talk at editorial meeting and acquisitions meeting about having Edel write a first introductory book--this is similar to what we did for Chowder by Peter Brown, although in this case, although we explored other story lines, in the end we went back to the original concept and shaped it more so it worked as a first book in a series.

It was certainly convenient working on the first book, as Edel was right in the building, although I know he'll testify that it wasn't always so great, as I would sometimes run into him randomly in the cafeteria and nag him about missing deadlines. But now we've moved on, and Edel has as well--he left his job at Time at the beginning of this year to spend more time with his daughter Sofia, and to focus on his illustration work full time. We're working on the second Sergio book now, Sergio Saves the Game, about Sergio playing soccer, slated for next Spring.

Edel contributes to a great illustrator blog, and he had a great post a few weeks ago about Sergio's publication here where he shows some interiors and some of the promotional things we've been doing. I love how he's Sergio-ized his blog!
And speaking of promotional things, last week we got in what is definitely the coolest promotional item ever made for any of my books. A full-sized Sergio beach towel!! It's sitting on one of the chairs in the office right now, so it kinda looks like Sergio's here with me. Isn't it awesome?! 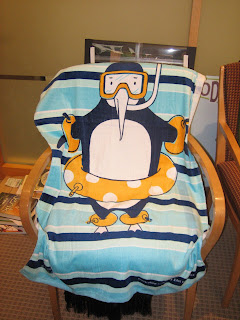 Sergio has been extremely well-received so far, including a starred review in Publisher's Weekly: "A penguin with a fear of swimming is both a comic and a useful premise—plenty of similarly haunted readers will want to laugh at Rodriguez's (Float Like a Butterfly) sympathetic presentation, and his illustrations guarantee that they'll be able to share the fun, too...One of those rare books that doesn't sacrifice child appeal in its embrace of up-to-the-minute visual techniques."
And one of my favorite reviews is from (gasp) Kirkus: "Sergio comes with his own website, but a celebrity like Olivia he's not--more of an everypenguin, whose angst in the face of new experiences will strike a chord in many young children."
And as I mentioned in my Bologna post, we gave Sergio a big push there--here I am, about to make a splash: 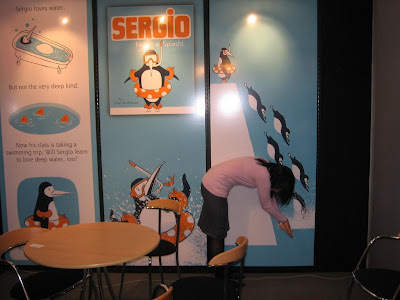 And I'll leave you all with this final picture. Here's Sergio's first fan--this is the designer, Tracy Shaw's niece, who of course got one of the advanced copies. 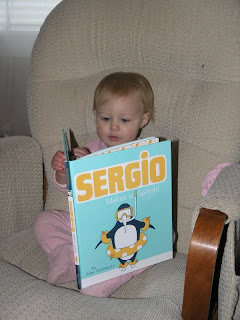 I love Sergio! I hope you all will, too.
Posted by alvinaling at 6:51 AM

I can't wait for this book! It is absolutely awesome!!!

Love Sergio and the beach towel and the munchkin reading! Interesting acquisition story :).

Wait - the book is out! Let me rephrase - I can't wait tro GET this book!

I discovered Sergio at Books-a-Million yesterday.

I was reading, but all he wanted to do was play in the water fountain.