I won't have time to post tomorrow morning--I'm meeting my colleagues at 6:15 am for breakfast, and then it's on to the press conference announcing the big awards. Finally, the wait will be over.
This was my first time to the ALA Midwinter conference, and I must say that there's definitely a different feeling to it. There are very few authors in attendance, so I've had more time away from the floor, and have had the opportunity to sit in on some of the committee meetings that are open. (The "major" awards are closed, of course.)
Today, I sat in on the BBYA (best books for young adults) session where they invite local teens to attend and talk about the books they've read on the list. Not all the books are talked about, and there were a few that stood out as the most popular, at least in terms of the number of teens who read them and wanted to talk about them. Audrey, Wait! by Robin Benway, Graceling by Kristin Cashore, The Hunger Games by Suzanne Collins, Little Brother by Cory Doctorow, Gone by Michael Grant, and The Host by Stephenie Meyer were the titles that had at least 7 readers. Many books had no readers, so that was saying a lot. Of course, the comments were quite mixed, and I was impressed at how articulate, poised, funny, and passionate the teens were. It was also fascinating to sit in on the committee meeting afterwards and hear how different they reacted in some cases from the teenagers.
I'll try to write more later in the week, but for now I'll leave you with a few pictures from our booth. This year, the booth had a Curious Garden theme in honor of Peter Brown's books. We wore cute gardener aprons (made by Zoe!) and gave out seed packets, signed posters, and had flower and plant details throughout the booth. Very cool. 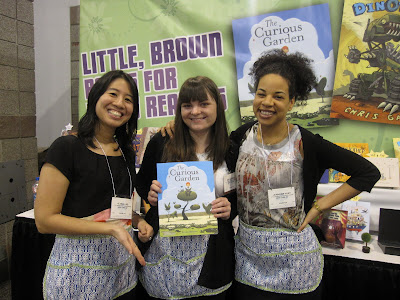 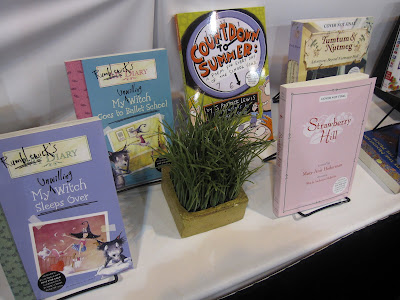 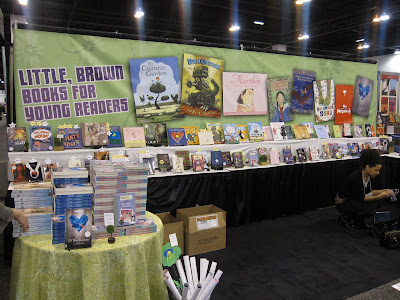 And I always love these book display towers that my colleague Andrew is an expert at making: 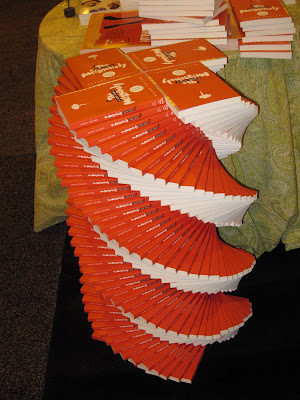 Here's a video of the tower:
Impressive, eh?
Whatever happens, it's been a great conference. On Saturday morning we gave a librarian preview of a selection of our 2009 books, and I'm really excited about everything coming out this year. Here's to 2009! Onward and upwards.
Posted by alvinaling at 9:12 PM

Email ThisBlogThis!Share to TwitterShare to FacebookShare to Pinterest
Labels: ALA, publishing

Those are some cool displays! I'm depressed that I'll have nothing coming out in 2009... and of course since all of my books have been on top of each other I'll probably have two the next year like I had two this year. Boo-hoo, I think my 2008 books have already been forgotten about.