So I was incredibly honored to be one the authors at the Boston Public Library's Literary Lights Event this past Sunday: 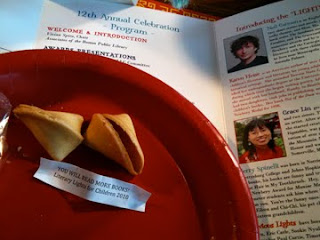 One of the best things at this event was something that Jerry Spinelli noted in his speech, it was an event where there were more children than adults: 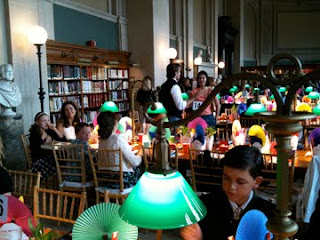 Which made it wonderful. Also what made it quite wonderful was that I got to rub elbows with literary greats such as Karen Hesse, Neil Gaiman (!!) and the aforementioned Jerry Spinelli.

See how happy I am? 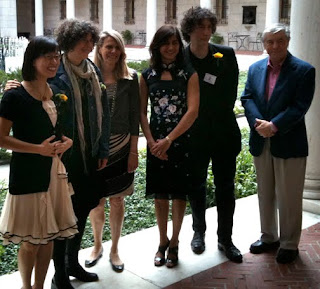 They were extremely nice to me, especially considering how awkward I felt during certain star-struck moments. Thank goodness for the the children and everyone involved who helped smooth things out for me for the rest of the event, making me feel like I wasn't quite akimbo next to the other authors. I think this is the first time where I can honestly say my hand did get tired from signing. Never has a muscle cramp caused such happiness! Ha ha!

And with that, I will leave you with the little speech I said upon receiving my lovely award:

When I asked what they’d like me to talk about in my five minutes, they said any tips or advice that would be helpful to a young writer.

Well, I like to think I am still a young writer but I guess according to the actual calendar I am not. I remember one of the first stories I wrote. It came to me like magic, as if the gorgeous rainbow the sky ended at my brain. The words poured out of me like a fountain and I wrote and I wrote and I wrote. When I was done, I knew it was great. It was best story ever.

And because it was the best story, I decided it should be published. I sent it to a publishing company and waited for them to make it into a book.

Finally, I put the story in a drawer and, this is very, very important, I wrote another story. And I wrote another story after that and another after until over ten years later, I am now here at the Boston Public Library with my stories being honored alongside Jerry Spinelli, Karen Hesse and Neil Gaiman.

So, recently, I opened that drawer with my first story in it. And I read it. And you know what?

It was absolutely awful.

No wonder it wasn’t published. Reading it was like 1,000 raining clouds inside your bedroom while you are trying to sleep. I was so, so embarrassed that I had thought it was the best story ever.

So when I was trying to think of advice for young writers, I came up with this:

Be humble. Know that what you have written is not the best.
But, also, be confident. What you will write will be better.

Lovely advice Grace. Congratulations on your recognition and special ceremony.