This is (I think) the first time I've ever posted done two posts, one about something I planned to do AND one about what happened when I actually did it.

Some of you may remember when I decided to go to ALA. Everything about it was a new way of doing things: first, partly because I hadn't flown anyplace in three years, I packed really carefully, even measuring my bag to make sure I could carry it on! Perhaps because of this, I actually liked the clothes I brought and felt appropriately dressed the whole time.

I also spent quite a long time making business cards -- or rather, I made one (the red one below, taken from the jacket flap of THE HOUSE BABA BUILT) and an old friend, who said,
"You should go armed," made the other. I love it! 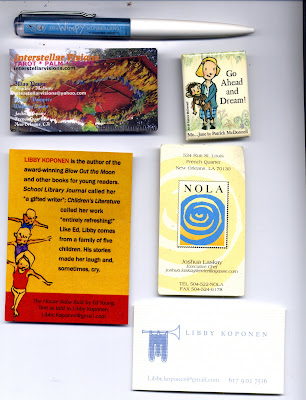 The top card is from our fortune teller. Grace said I could go first, adding (as a joke) that if my fortune was good, she would get one. The fortune teller looked alarmed:
"Hey, I'm just the messenger!" she said.
The reading was, I thought, uncannily accurate - and to for once have a record of these things, I'll tell it here. 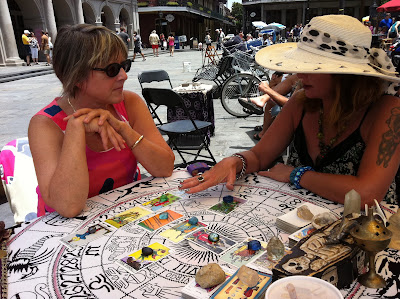 She began by asking me to choose a deck: one of the many fun things about her was that she had 5. I chose a variation on the classic Rider deck; Grace chose the fifties retro one (the red convertible in her post below represents the card The Lovers! Very cool!). Other fun things about our fortune teller were her sparkly green eyeshadow, cool glittery nail polish, deep laugh, and warmth.

First, she gave some explanations -- including that the time period for the reading was about a year.

In this next year, I will have a whole new beginning--money will be easier and STAY easier; I'll take a long vacation (already planned -- I had just told Grace about it that morning). For my projects to come to fruition (and they will, though it may take the full year), I will need to "think outside the box" and do things in a completely different way than I have before.

That is what will lead to the completely new beginning, shown in the last card (the Ace of Wands). I also got one of my favorite cards in the deck, and one that has I think come up almost every time I've had my Tarot cards read -- The Fool. This does NOT mean that you're an idiot, but rather -- well, you can look up all the meanings of the cards in the previous link.) 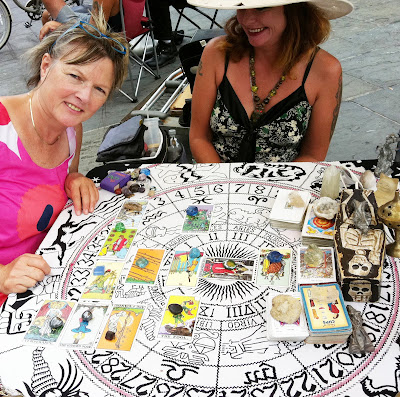 After our reading, we went to lunch at NOLA, where I had one of the best meals of my life -- Grace unfortunately had to leave before she could even finish her crabcake, as she had a signing.

But although that was sad, it was like everything else at the conference: it had its upside.On my way out, I praised the meal in some detail -- and the person I was talking to turned out to be the chef who had created it!
His whole face lit up, and he gave me a card. At the conference, I got to meet Joyce Sidman (someone I've long admired), Russell Freedman (whose work I have often read aloud to a child who loves American history --I admire him a lot too!), and too many other people to list here. Little, Brown gave me buttons for and a copy of a new book I love -- ME...JANE by Patrick McDonnell. It's about Jane Goodall's childhood and is one of the most perfect picture books I've ever seen. TWO of Anna's books were on display in the same booth -- DISAPPEARING DESMOND, shown in Grace's post Wednesday, and
A PHOTO FOR GRETA, which the NY TIMES called "a paean to paternal love." 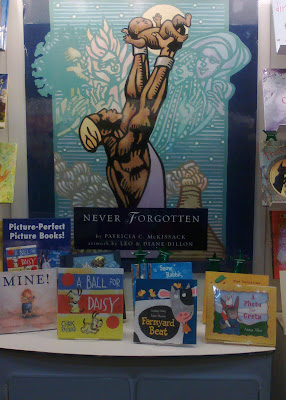 The whole conference was like that: things just seemed to happen as they were meant to, even when I thought I was making foolish choices. As it turned out, I only spent a few hours at the actual conference (a friend's child was there and we spent nearly all of Saturday sight-seeing: she got HER fortune told, too, and said it was "similar" -- to reality. It did seem to accord with what I know of her life -- and when the fortune teller read her palm, she burst out laughing at how stubborn she was). In the evening, we watched CASABLANCA -- her choice -- and we both laughed a lot and loved it, though she was disappointed in the ending.

Maybe I was just in a really good mood from spending time with friends and seeing a city I loved and eating great food and just having so much fun. Maybe the meditating I've been doing really is changing my point of view, and making me worry less and see the positive side of things more. But the fact that she loved Casablanca so much made me think that the classics, in all the arts, will always matter: and that is encouraging. Sometimes seeing all the YA and paranormal that is so popular and so different from what I write myself is discouraging -- but one of the many things I took away from this conference is that there is room for all kinds of writing. A person (eg, my young friend) can love TWILIGHT and CASABLANCA.

Posted by Libby Koponen at 9:50 AM

Email ThisBlogThis!Share to TwitterShare to FacebookShare to Pinterest
Labels: ALA, Libby Koponen

Libby, your clothes WERE nice, especially that super cute dress you're wearing as you get your fortune read. I love Jane Goodall, I'm definitely going to have to get ME...JANE! Sounds like a wonderful time you had :)

Sounds like so much fun Libby! I wish I could have strolled the city with you guys.

I was on a panel at the BEA with the Patrick McDonnell. It really is a great book! I have to get my own copy.

Libby, it sounds like you had a great time. I'm glad.