NESCBWI, an epoch in my life

So, I have to admit things in early May were  rather stressful.  Our condo had sold a faster than expected and the packing was in full swing (which was even more challenging now that Rain Dragon was walking!). So when the NESCBWI conference rolled around, everything was in a state of chaos and I was just crossing my fingers that I didn't make any disastrous mistakes. We just made it to conference a half hour before my keynote speech and I think I gave the organizers a heart attack (sorry!).

Because I really regret not being able to partake in more of the conference. It sounded amazing and I can't believe  I missed hearing Sharon Creech speak! She (and Natalie Babbitt) is probably my favorite living author, her book Castle Corona indirectly inspired Where the Mountain Meets the Moon-- I used it to show my publisher how beautiful a novel in full-color would look...and it convinced them!

And what made it even worse is that by getting to the conference so late they ran out of her books at the store (and I was not far-seeing enough to set aside my already-owned copies of her books in an easily identified box) so I missed out on getting a book signed! Boo hoo! But I thought at least Rain Dragon and I could get a photo...and what a photo it is: 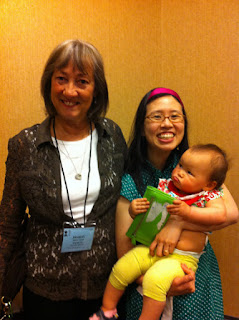 Look at Rain Dragon's face! Ha ha! I think she is feeling some professional jealousy out of loyalty to me.

However, even with my less-then-auspicious state of mind, the NESCBWI conference was (as Anne of Green Gables would say) an epoch in my life.  Because, as I've mentioned before (way back when we were having debates about talent) while I am proud of how much I've improved as a public speaker, I'd never consider myself great at it.

But somehow, in the company of fellow children's book author and illustrators and their welcoming, understanding energy, the elements combined and my speech* was  so well-received that I actually got a standing ovation.


This was a first for me! I was very surprised, but also so grateful. It was a lovely moment, lifting me out of the dismal gloom of moving. Thank you, NESCBWI!

*small footnote: in my speech I spoke about how an editor at Charlesbridge asked me to change an Asian girl character to a caucasian boy character because it would pigeonhole me as a multicultural author/illustrator. I'm a little afraid I might not portrayed the story with as much entirety as I intended and people might be judging the editor and the publishing company unfairly.
-In defense of the editor (who I'll leave nameless unless he wishes to out himself online) his suggestion was his way of looking out for me, trying to make sure I didn't get branded in a way I didn't want. And, he was right.  When my second book featuring Asian characters came out, I was immediately pigeonholed as a multicultural author.
-In defense of Charlesbridge, this was over 13 years ago when they were just starting their fiction line (before that they had been mainly known for educational, non-fiction books). The entire staff has changed since then and their company policy is now known for embracing books with diversity (like Mitali Perkins' Bamboo People)--they are company anyone would be proud to be published with!

I was at the NESCBWI conference and I wanted to let you know how much your speech moved me. I really connected with your story about growing up Asian in a small town and learning to accept being a "multicultural" author because it parallels my own struggles (I grew up in Arkansas and was often embarrassed to be different from everyone else. I remember refusing to let my mom pack leftovers from our dinner in my lunchbox.) I was so self-conscious when I started writing a historical fiction (that takes place in India) because I felt like I wasn't Indian enough to write it since I never lived there and don't speak my own mother-tongue. Your speech really resonated for me and left me feeling validated in a way. So thank you for that!

Hi Grace! I am a big fan of both your illustrations and your written work. I am so sorry I missed the conference—and your speech!—this year. I have no doubt that the standing ovation was well deserved. Adorable photo!

Aww, thanks for your nice comments!
Amithaknight--I'm glad my speech resonated with you.
Beth G--so glad you like my work!