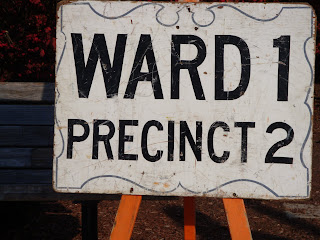 I really felt more excited than ever about casting my vote in a presidential election. And I've been voting since 1968! The election of 1972 was the second most important to me. That was the year George McGovern ran against the incumbent--Richard M. Nixon. The Commonwealth of Massachusetts--where I was born, raised, and still live today--was the only state that didn't "go" for Nixon. Later, some people could be seen driving around my state with bumper stickers on their cars that read: Don't blame me, I'm from Massachusetts.

I am hoping my candidate will win this election. I am hoping, too, that our next president will help to end the divisiveness that has been a blight on our country in recent years.
***************
Here are some scenes from my polling station. I arrived just before two o'clock this afternoon. There was no crowd. I didn't have to wait in line. The police officer standing outside the elementary school where I voted said that it was the quietest he had seen it all day. 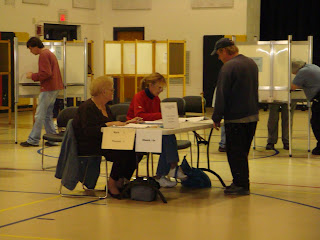 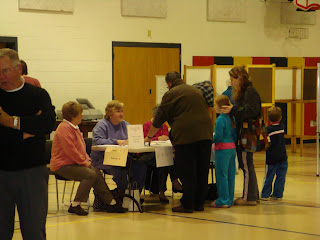 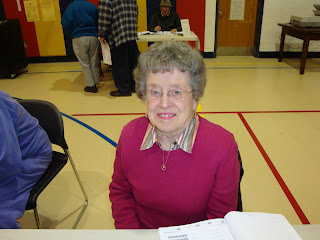 This is Barbara Acres, one of the poll workers. She was kind enough to let me take her picture.

Posted by Elaine Magliaro at 3:46 PM

This was fun to read and see, Elaine -- thanks. That was my first election, too: and I voted in Massachusetts as well. And of course, I voted for McGovern -- let's hope things turn out better this time!
Libby

My husband and I were entertaining thoughts of moving to Canada if Obama lost. In fact, my husband spends a lot of time in Ontario. He's there at the moment.